A Tibetan activist in Nepal was detained for nearly 10 days by Nepalese police and threatened with deportation after he posted a picture of himself with a Tibetan flag on Facebook in early March, and wrote to international embassies in Kathmandu about human rights concerns in Tibet. There are increasing dangers for Tibetans in Nepal as the Nepalese authorities deepen their relationship with China, with rumors of a high-level Chinese delegation visit to Kathmandu soon.

Three days after posting the image, the Tibetan activist, Adak, was near the Boudha stupa in Kathmandu when he was approached by police, he told ICT. They showed him the photograph and when he confirmed that it was his picture in response to their query, they took him into custody. Adak, who is in his early forties, said that he was slapped and kicked in the process but was not further beaten in custody. He said that police threatened to deport him to Tibet. Prior to his arrest at Boudha, Adak had also taken photographs of police at a nearby Buddhist monastery, according to Nepalese human rights supporters who helped to facilitate his release.

Adak was held from March 14 to March 22, when he was released after the Nepalese human rights organization, HURON, intervened on his behalf. Adak is a member of a small group of Tibetans, the Tibetan Volunteers Group in Nepal, who were involved in arranging peaceful protests from 2008 in response to the violent crackdown following the wave of mostly peaceful protests that spread across Tibet.

Adak told ICT that for the past three years or more it has been too dangerous for the group to carry out any form of peaceful protest due to China’s influence in Nepal. The letter to the embassies and photographs on social media are different and lower profile forms of advocacy that they had sought to adopt. The letter to the international embassies in Kathmandu expressed the Tibetans’ distress and concern about the deteriorating human rights situation in Tibet at the time of the March 10 anniversary of the 1959 Uprising and 2008 protests. They raised the case of Tibetan language advocate Tashi Wangchuk, imprisoned following a video by the New York Times, and concluded by saying: “As Tibetans in Nepal, […] we call upon you to press Beijing to urgently cease the implementation of aggressive measures that are exacerbating the extreme situation.”

“I don’t know how the Nepalese police knew about the photo on Facebook,” Adak told ICT. “We can only assume it is interference from the Chinese. Nowadays the situation for Tibetans in Nepal is almost the same as for Tibetans in Tibet.” After his release Adak was admitted to hospital and put on a glucose drip, as his health was affected by his period in custody. For his own safety, he has now left Nepal for India during the politically sensitive anniversary month of March. 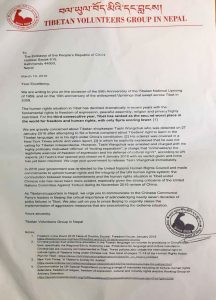 Strengthened economic and political ties with the Nepalese government, including the formal involvement of Nepal with Xi Jinping’s ambitious ‘One Belt One Road’ plan, have led to a contracting space and dangers for Tibetans in Nepal as the Nepalese authorities deepen their relationship with their more powerful neighbor.

There is a direct correlation between the deepening investment and aid from China and the vulnerabilities of Tibetans in Nepal, acknowledged openly by Bejing when it described its investment as a reward to Nepal for its “important role in guarding against Tibetan separatists” according to a report in the Chinese state media last year. There has been a dramatic decline in Tibetan refugee arrivals and continued inaction on the status of Tibetan refugees; thousands of Tibetans remain stateless and in political limbo in Nepal.

Matteo Mecacci, President of the International Campaign for Tibet, said: “There is no justification for the detention and intimidation of a Tibetan who did nothing more than post a picture of himself and participate in writing a reasonable letter to the international community in Nepal. It is a shameful act that does not serve Nepal’s international reputation. For centuries, Tibet and Nepal have shared cultural, trade and religious links across the Himalayas. It is long overdue for the Nepal government to respect Tibetans’ fundamental rights and freedoms in accordance with Nepali domestic and international law, particularly as Nepal began a three-year term as a member of the U.N. Human Rights Council this January.”

The combination of China’s political strength and Nepal’s relative weakness has left Nepal’s Tibetan population little to rely on in the way of protection as their legal status has been delegitimized and their representative and welfare offices are under pressure. Nepal may not have completely capitulated to Chinese pressure, and its strong connections to India endure, but what few sources of protection remain for Tibetans are increasingly fragile.

Matteo Mecacci said: “The embassies who received the letter from the Tibetan Volunteers Group should work multilaterally to press the Nepal government to implement a formal protection policy for Tibetans in Nepal that regularizes their status and provides them with the documentation they need.”

Last year, Nepal was elected by the UN General Assembly to a three-year term as a member of the Geneva-based Human Rights Council (UNHRC), beginning on January 1 (2018). In this context, it should indicate its commitment to follow recommendations made in previous Universal Periodic Reviews to ensure documentation of Tibetan refugees living in Nepal, and protection of their rights to freedom of expression and assembly.