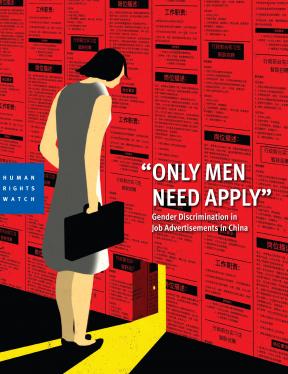 The 99-page report, “‘Only Men Need Apply’: Gender Discrimination in Job Advertisements in China,” analyzed over 36,000 job advertisements posted between 2013 and 2018 on Chinese recruitment and company websites and on social media platforms. Many of the ads specify a requirement or preference for men. Some job posts require women to have certain physical attributes – with respect to height, weight, voice, or facial appearance – that are irrelevant to job duties. Others use the physical attributes of companies’ current female employees to attract male applicants.

Human Rights Watch found that in the 2017 Chinese national civil service job list, 13 percent of the job postings specified “men only,” “men preferred,” or “suitable for men.” For example, a posting for a position at the Ministry of Public Security news department read, “need to work overtime frequently, high intensity work, only men need apply.” In the 2018 national civil service job list, 19 percent specified a requirement or preference for men. In contrast, none specified “women only,” “women preferred,” or “suitable for women” in the 2017 list and only one specified a preference for women in the 2018 list.

Beyond unlawfully depriving women of job opportunities, these job ads reflect deeply discriminatory views about women: that they are less intellectually, physically, and psychologically capable than men, or that they are not fully committed to their jobs because some will eventually leave their positions to have a family.

Some job ads use the physical attributes of women – often the company’s current employees – to attract male applicants. In recent years, Alibaba has repeatedly published recruitment ads boasting that there are “beautiful girls” or “goddesses” working for the company. In an October 2016 article published on tech company Tencent’s official recruitment WeChat account, a male employee was quoted saying, “The reason I joined Tencent originated from a primal impulse. It was mainly because the ladies at human resources and that interviewed me were very pretty.”

“Sexist job ads pander to the antiquated stereotypes that persist within Chinese companies,” Richardson said. “These companies pride themselves on being forces of modernity and progress, yet they fall back on such recruitment strategies, which shows how deeply entrenched discrimination against women remains in China.”

Several women in recent years have brought successful court challenges to gender discrimination in job ads, but the compensation imposed on violators was low. In 2013, college graduate Guo Jing sued a culinary school in Zhejiang province that published an ad for a male-only clerk position. The court ruled that the school violated Guo’s rights to equal employment and ordered it to pay Guo 2,000 yuan (US$300) in damages. This is believed to be the first time a job seeker won a gender discrimination case.

“Instead of harassing and jailing women’s rights activists, the Chinese government should engage them as allies in combating gender discrimination in the job market – and beyond,” Richardson said.