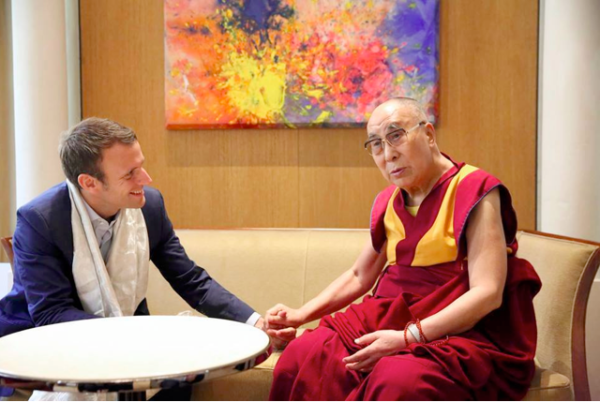 French President Emmanuel Macron on Wednesday rejected the prospect of meeting with the Dalai Lama, saying doing so without consulting Beijing first would trigger a “crisis” with China’s government.

Macron, speaking at a town hall with George Washington University students in the US capital at the tail end of his state visit, said he met in Paris with the “very inspiring” exiled Tibetan spiritual leader when Macron was a candidate.

“Now I’m President of the French republic. If I meet him it will create indeed a crisis with China,” Macron said.

And doing so “without any precondition,” just to send a signal to China, would be “useless and counterproductive,” he said.

“Is it good for my people if I have a sort of countermeasures coming from China” as a result of the meeting? “For sure no.”

But Macron, fresh from a rare address to lawmakers in the US Congress, also opened the door for deeper engagement on the issue.

“If France could be useful in order to fix the situation between the Dalai Lama and his people, and China, I will do my best,” he said, adding that he perceives “some early signals” that Chinese President Xi Jinping may be open to addressing the issue.

The Dalai Lama says he seeks only greater autonomy.