Various human rights experts, academicians, diplomats, practitioners, advocates and activists gathered at the Forum unequivocally called for an imperative need to end China’s long game on Human Rights. The Forum revolved around keeping hope alive and continuing the fight for truth with the hope that China will be held accountable under the UN System for its gross human rights violations.

The Chief Guest of the Forum, Hon’ble Lisa Mazzone, Member of National Parliament, Switzerland, expressed concerns about the deepening ties of Switzerland with China and assured her “full support” for the Tibetan people and restoring human rights in Tibet and China.

CTA President Dr Lobsang Sangay highlighted China’s intrusive tactics in skirting universal human rights obligations and warned that “the Chinese Communist Party is already here at the UN, in Europe, and in fact, all around the world. Either we change them or they will change us.” 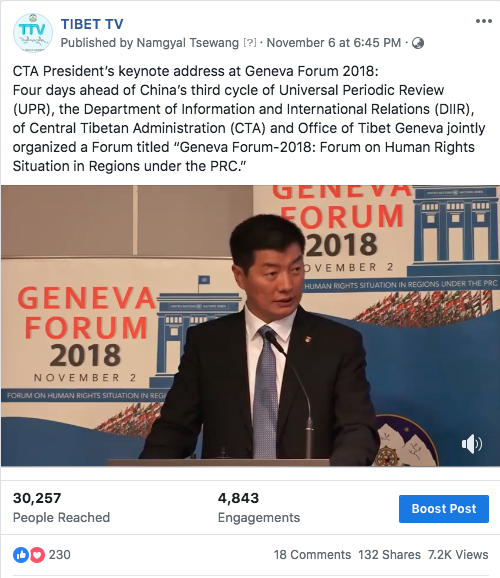 Venerable Golog Jigme, activist and the former political prisoner and a documentary filmmaker shared his heart-wrenching account of the torture endured by him in the Chinese prison in Tibet. He appealed to the UN Member States at the UPR saying, “Please review the human rights situation in China carefully and critically. If the UN fails to make China accountable this time, then it has failed all humanity.”

On the eve of China’s UPR, the Society for Threatened Peoples (STP) organized a side event at the United Nations Council titled “Promises Unfulfilled: Human Rights in China- the case of Tibet and Xinjiang”, at Palais des Nations, Geneva where experts highlighted the rights abuses under the Chinese regime and suggested best practices forward to ensure China’s accountability at the UN and at the international forums.

Mr Sonam Norbu Dagpo, DIIR Secretary of  International Relations, highlighted that “for Tibetans in Tibet, there is no grievance that can be expressed, no idea, request or thought that can be revealed without being punished if it is not to the liking of the Chinese government”. 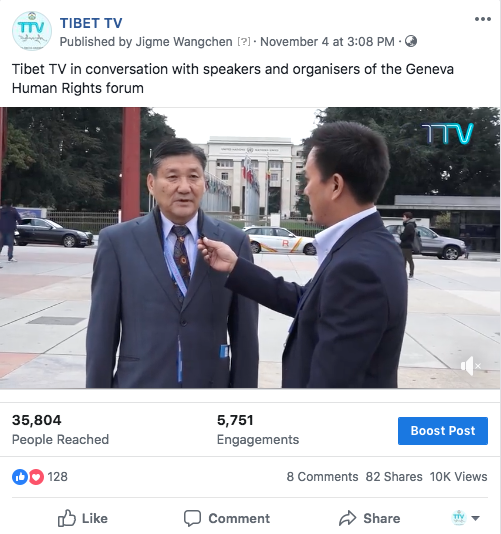 Tibet TV in conversation with DIIR International Secretary Sonam Norbu Dagpo, one of the organisers of the Geneva Human Rights Forum 2018. Photo/Screengrab/@TibetTV/Facebook

On 6 November 2018 China was reviewed at the 31st session of UN Human Rights Council’s Universal Periodic Review for its human rights record. A total of 12 Member States: Australia, Austria, Canada, Denmark, France, Germany, Japan, New Zealand, Sweden, Switzerland, United Kingdom and the United States raised concerns over human rights violations in Tibet, in particular, the freedom of religion and belief, freedom of expression and assembly, crackdown on Tibetan Buddhist lamas, and called for unhindered access to diplomats and UN representatives to Tibet.

On these concerns, nine Member States made a total of 12 recommendations on Tibet. In particular, New Zealand called for the “Resumption of two-way dialogue on Tibet’ and the US called for the release of Tashi Wangchuk, a language rights advocate in Tibet and strongly recommended China to stop interference in the selection and education of religious leaders- including the reincarnation of Tibetan Buddhist Lamas.

Speaking on the Review, DIIR  Information Secretary Tenzin Dhardon Sharling said “Post the UPR review, we will continue to step up our advocacy efforts and keep pushing for China to accept the recommendations and allow a fact-finding and investigative visits by UN experts, while strengthening deliberations on China in the Human Rights Council, and ensure China’s compliance with human rights treaties.” 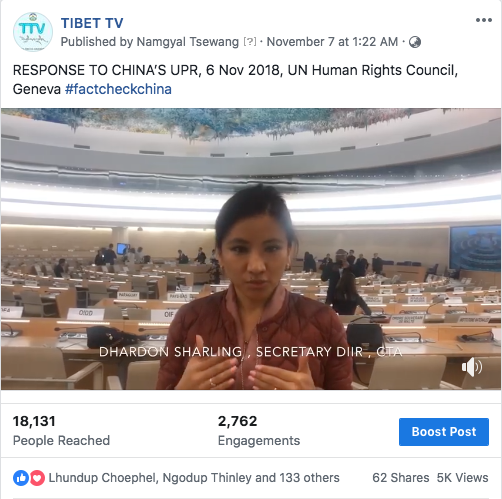 A glimpse of netizens’ reactions on Geneva Forum 2018 and China’s Third Cycle of Universal Periodic Review: 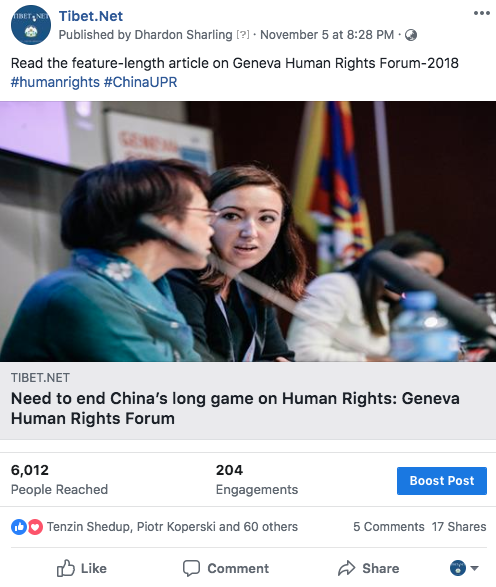 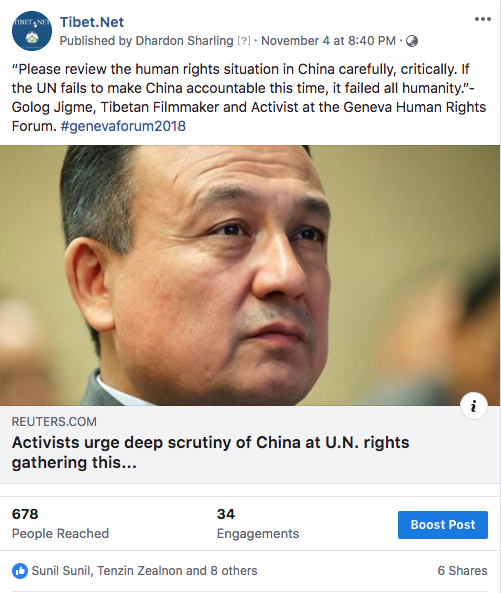 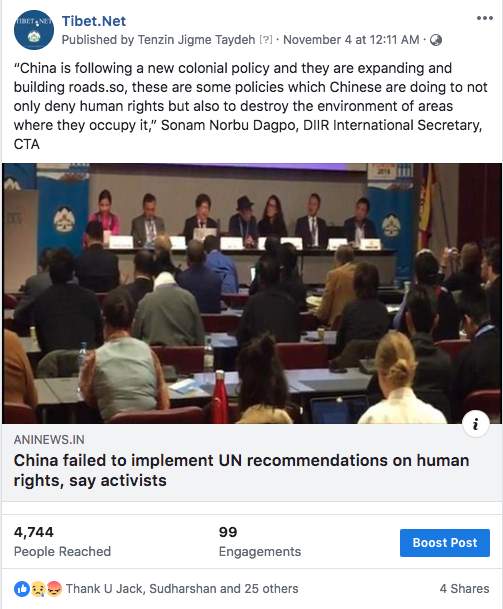 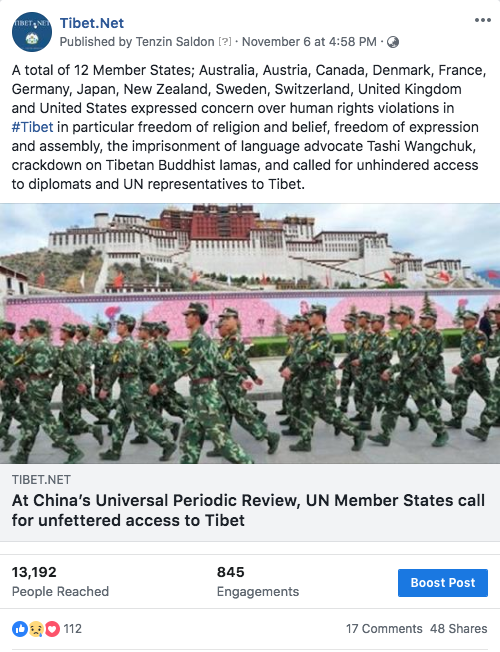 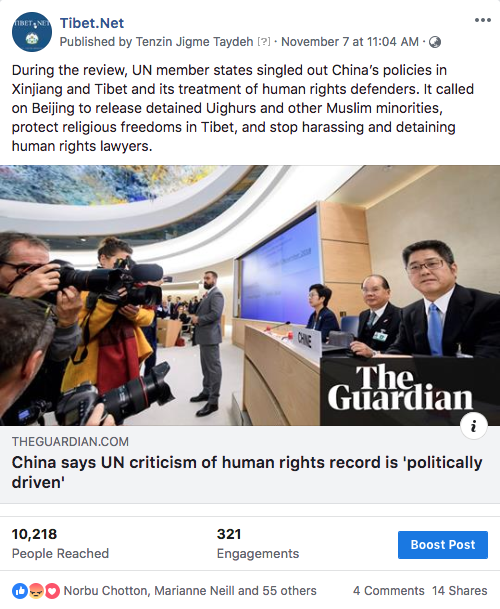 Previous Post Tibet’s “Mosquito Strategy” at the UN on China’s UPR Next Post “No matter how much pressure the Chinese government put on me, I will show up”: CTA President in Germany