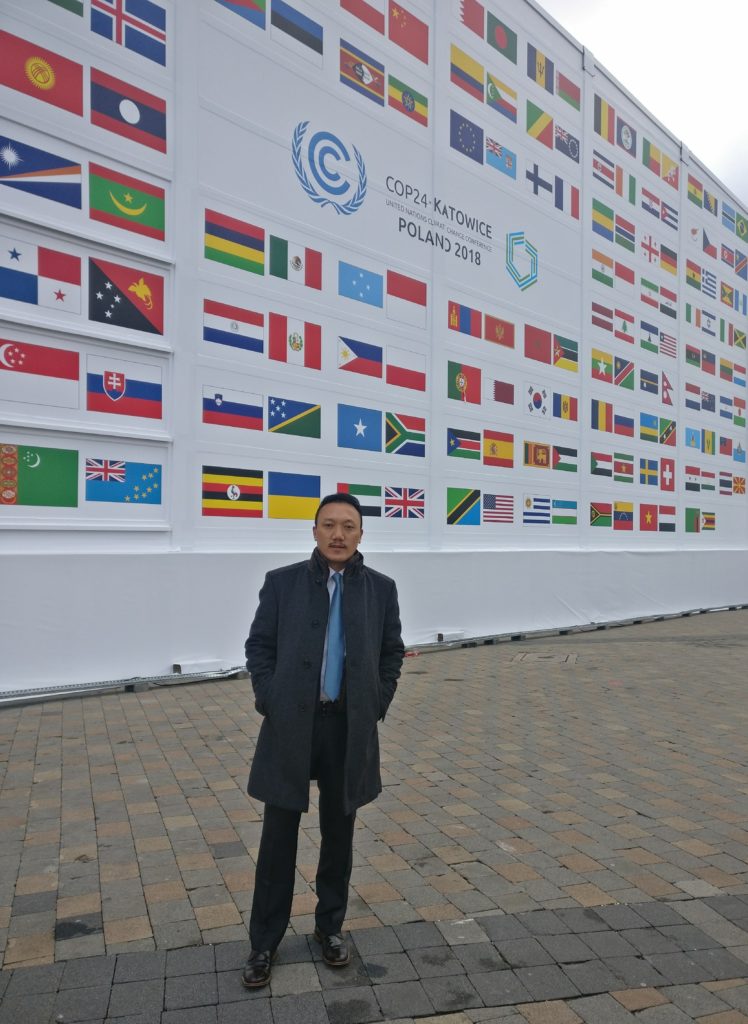 Katowice, Poland, 5 December 2018: His Holiness the Dalai Lama greets the COP24 UN Climate Summit delegates with a written message, appreciating their work and praying for a successful negotiation. The written message is being delivered, in hand, by Zamlha Tempa Gyaltsen, an environment research fellow at the Tibet Policy Institute, who has been representing Tibet at the annual global climate change conference for many years.

The 24th Conference of Parties is currently underway in the city of Katowice, in Poland with delegates from around 195 countries converging for the Summit. This is the largest annually held global climate summit, organized by the United Nations Framework Convention on Climate Change.

His Holiness stated that “Climate change is not the concern of just one or two nations. It is an issue that affects all humanity, and every living being on this earth. This beautiful planet is our only home. If, due to global warming or other environmental problems, the earth cannot sustain itself, there is no other planet to wish we can move. We have to take serious action now to protect our environment and find constructive solutions to global warming.”

Tempa highlights the global ecological importance of the Tibetan plateau and the extreme negative impact of climate change on the world highest plateau.

“Despite the massive global climatic role the Tibetan Plateau plays, it’s not given to due importance by the international community for various reasons. We have been attending COP conferences since 2009 to change that perception by highlighting its ecological importance,” said Tempa Gyaltsen.

“We have been asking the United Nations Framework Convention on Climate Change to recognize the global ecological importance of the Tibetan Plateau and make it central to global climate discussions,” he added.

The Tibetan Plateau, with a surface area of 2.5 million sq.km, is home to the third largest store of ice (46000 glaciers) is rightly called the Third Pole by scientist as its climatic role is as important as the two poles. The plateau is also the head source of Asia’s largest rivers, supporting almost 1.5 billion people. Unfortunately, the plateau has seen an unprecedented number of natural disasters due to rising temperature in the region.

His Holiness called for cooperation among nations to solve a common problem. “When we see photographs of earth from space, we see photographs of the earth from space, we see no boundaries between us, just this one blue planet. This is no longer a time to think only of ‘my nation’ or ‘our continent’ alone. There is a real need for a greater sense of global responsibility based on a sense of the oneness of humanity,” read the message.