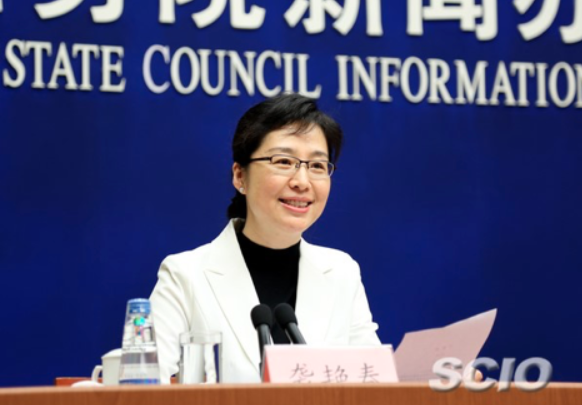 Xi Yanchun, a spokeswoman for the State Council Information Office, at a press conference on the white paper, 3 April 2018. Photo: scion.gov.cn

Geneva: China issued a White Paper last week which yet again claims that rights of special groups like Tibetans are “fully protected.”

Released by China’s State Council Information Office, the White Paper is titled “Progress in Human Rights over to 40 Years of Reform and Opening Up in China,” and says reform and opening-up has created “a path of socialism with Chinese characteristics, and ushered a new chapter in the development of human rights.”

This year marks the 40th anniversary since Deng Xiaoping launched the reform and open-door policy, an economic policy that transformed China into the world’s second largest economy.

The White Paper’s several claims about the human rights situation of Tibetans contradict reports by other impartial and independent sources.

For example, in the so-called Tibet Autonomous Region (TAR), the right of Tibetans in administering state affairs is “effectively guaranteed” and allow Tibetans to exercise regional autonomy, says the White Paper. However, the independent watchdog Freedom House has noted, “In practice, however, decision-making power is concentrated in the hands of senior, ethnic Chinese CCP officials…[and the]…few ethnic Tibetans who occupy senior positions serve mostly as figureheads and echo official doctrine.”

The claim that the Chinese government respects and fully protects minority languages by providing bilingual education comes just after the United States called for the release of Tashi Wangchuk at China’s Universal Periodic Review at the UN Human Rights Council last month.

Tashi Wangchuk is a language rights activist who was sentenced to 5 years in prison for “inciting separatism” after he spoke to the New York Times about the threats to the native Tibetan language because of official policies making Mandarin the medium of instruction in schools.

According to the White Paper, China protects Tibetans’ right to religious freedom, citing that today TAR holds 1,778 venues to practice Tibetan Buddhism with some 46,000 monks and nuns. However, in December 2016, the European Parliament had to pass a strong resolution demanding China to stop violating Tibetans’ religious freedoms. The resolution came after China ordered a large-scale demolition of Larung Gar and Yarchen Gar, the largest Tibetan Buddhist institute and demolished more than 4000 houses and forcibly evicted around 5000 monks and nuns between 2016 and 2017.

By significantly reducing the population, it made way for the Chinese government to closely monitor and manage the institute.

The White Paper also claims Tibetan cultural heritage and relics have been protected. However, Tibetans in Lhasa, the capital city of Tibet, would strongly reject this claim after the sacred Jokhang temple—a seventh-century UNESCO world heritage site—suffered significant damage following a large fire on the second day of Tibetan New Year this past February.

Recognizing the political and religious significance of the Jokhang temple, China took significant efforts to control all information surrounding the fire and the extent of the damage. A major fire to the holiest shrine revealed China’s failure to meet its responsibilities under the UNESCO World Heritage Convention. A call for an independent investigation by Tibet watchers and activists went ignored.

Economic development is an area China likes to rave about in order to absolve itself from human rights obligations. The White Paper states that the total GDP of the five autonomous regions of Tibet, Inner Mongolia, Guangxi, Ningxia, and Xinjiang, and the three provinces of Yunnan, Guizhou and Qinghai has increased from RMB32.4 billion in 1978 to RMB8.49 trillion in 2017.

In contrast, the UN Special Rapporteur on extreme poverty and human rights, Philip Alston’s mission to China in August 2016 concluded that “…most ethnic minorities in China are exposed to serious human rights challenges, including significantly higher poverty rates, ethnic discrimination and forced relocation.”

Tibet’s economic structure is also highly unsustainable with the region largely dependent upon subsidies flowing in from Beijing.

After 40 years of “reform and opening-up” in China, there is still a serious human rights deficit in Tibet.

Previous Post Rise above Regionalism and Parochialism, Unite towards the Greater Cause of Tibet: CTA President in Canberra December 7, 2018 Next Post His Holiness the Dalai lama graces the Third Debate of Scholars from different traditions in Bodh Gaya