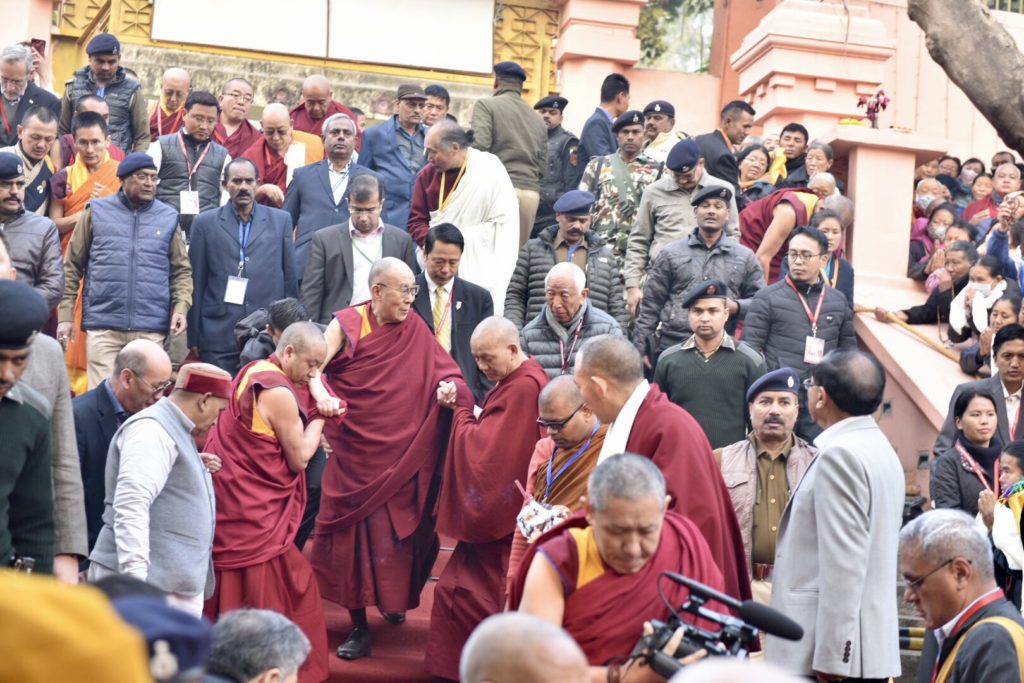 His Holiness the Dalai Lama on pilgrimage to the Mahabodhi Temple on the last day of his visit to Bodhgaya, Bihar on January 2, 2019. Photo/Tenzin Phende/CTA

Bodh Gaya: His Holiness the Dalai Lama made a pilgrimage to Mahabodhi temple before concluding his 17-day long visit to Bodh Gaya on Wednesday. Thousands of pilgrims packed the streets to catch a glimpse of the Buddhist leader who is scheduled to depart for Delhi.

In Bodh Gaya, His Holiness the Dalai Lama gave a series of Buddhist teachings to underscore the essence of Buddha dharma and encouraged devotees to observe ‘ahimsa’ or non-violence in their conduct, ‘karuna’ or compassion as their motivation and dependent arising as their view of reality.

On 19 December, His Holiness inaugurated the First Conference of Scholars of Different Traditions on Jé Tsongkhapa’s ‘Essence of True Eloquence’ organised by Kirti Monastery and laid the foundation stone for the prospective Samye Ling Tibetan Buddhist Nalanda Academy.

On 21 December, he met with members of an Inter-Faith Forum from Gaya, comprising Buddhists, Hindus, Christians, Muslims, Jains, Sikhs and Brahmakumaris at his local residence Gaden Phelgyeling.

Next day, His Holiness inaugurated an International Seminar on the Tipitaka / Tripitaka organized by the Buddhist Thai-Bharat Society, the Dalai Lama Trust and the Central Institute of Higher Tibetan Studies (CIHTS), Sarnath.

His Holiness gave two-day teachings on ‘The Thirty-seven Practices of Bodhisattvas’ and ‘Commentary on Valid Cognition’ on 24 and 25 December.

On 26, 28 and 30 December, His Holiness gave empowerments on Solitary Hero Yamantaka, ‘Manjushri Cycle of Teachings’ and on White Heruka.

Finally, on 31 December, His Holiness presided over a long life prayer offering made in his honour by the Central Tibetan Administration, Namgyal Monastery and the Shelkar Ngashap. 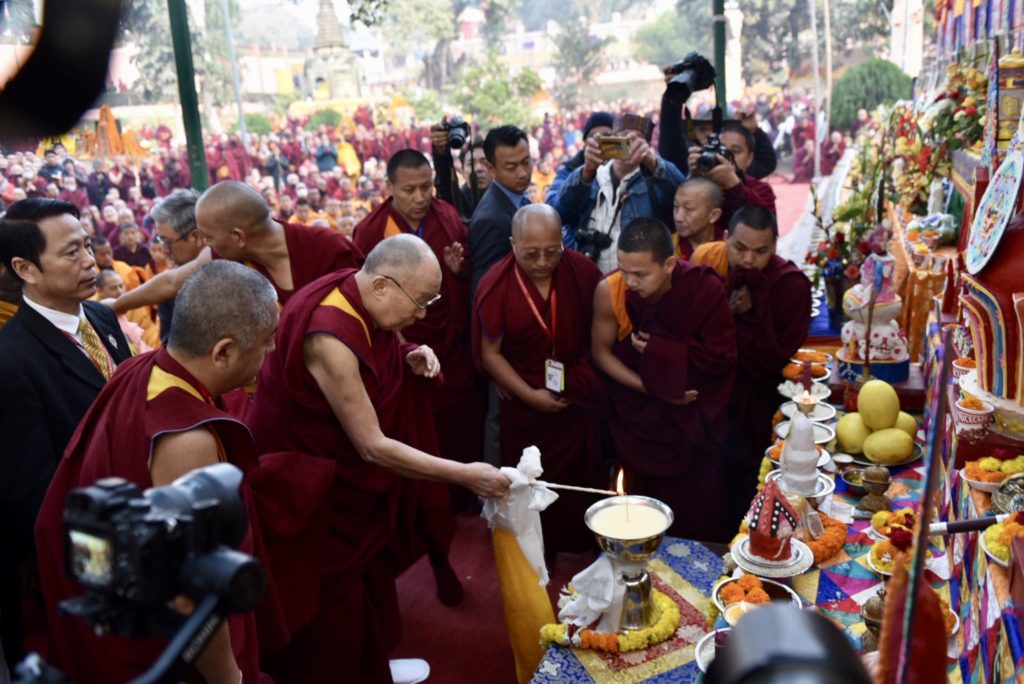 His Holiness the Dalai Lama making offerings as he arrives at Mahabodhi Temple in Bodhgaya, Bihar on January 2, 2019. Photo/Tenzin Choejor/OHHDL 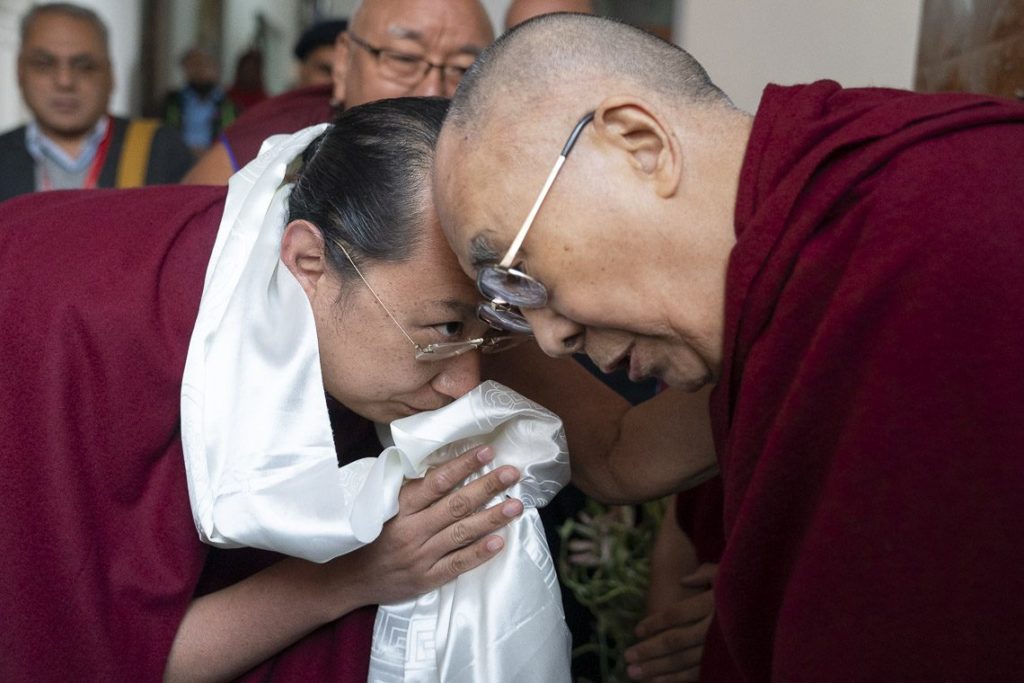 Sakya Trizin bidding His Holiness farewell as he prepares to depart from Gaden Phelgyeling Monastery on the last day of his visit to Bodhgaya, Bihar on January 2, 2019. Photo/Tenzin Choejor/OHHDL 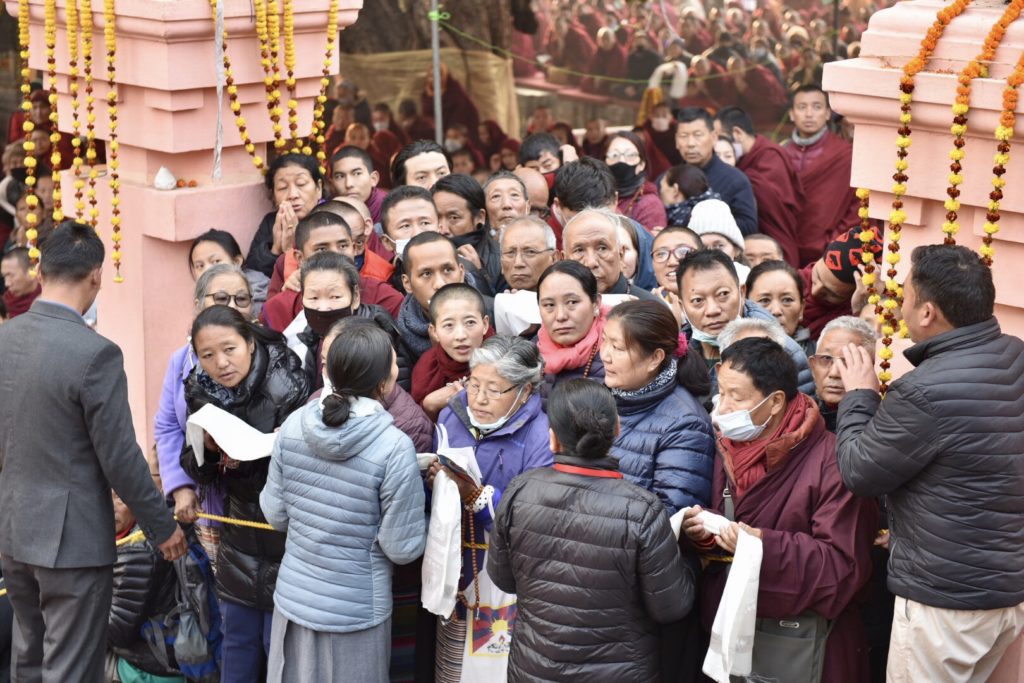 Multitudes of devotees await the arrival of His Holiness the Dalai Lama at the Mahabodhi Temple, Bodh Gaya on 2 January 2019. Photo/Tenzin Phende/CTA

Previous Post “I am healthy, my mind is sharp and I pray to live for over hundred years”: His Holiness the Dalai Lama at Tenshug ceremony, Bodh Gaya Next Post Travel restrictions on Tibetans persist despite International outcry against China