Ten thousand Tibetan monks trained and equipped with ancient Indian knowledge could help revive it among Indians, says His Holiness the Dalai Lama 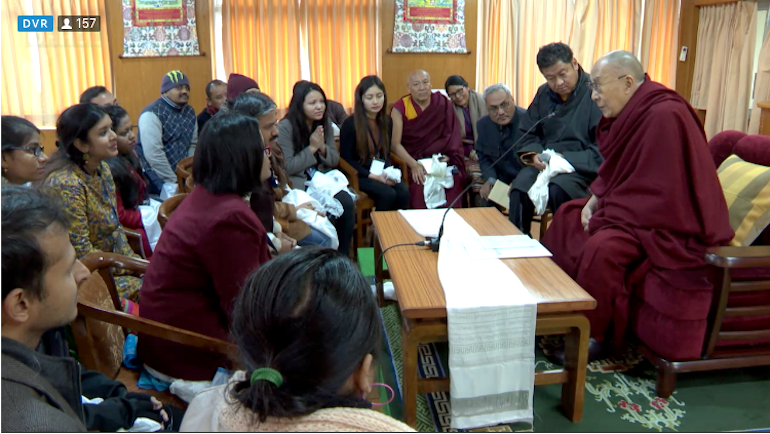 His Holiness the Dalai Lama interacting with young Indian scholars at his residence in Dharamsala, HP, India on January 24, 2019.

Dharamshala: His Holiness the Dalai Lama proposed that reviving ancient Indian understanding of the mind and emotions, reason and logic, in modern India, is a contribution Tibetans can make.

Interacting with a delegation of Indian scholars at his residence this morning, His Holiness the Dalai Lama observed that although such knowledge developed in India, in the course of time, interest in it diminished.

“However, we Tibetans have kept it alive and have brought it back to the land of its birth,” he said.

His Holiness mentioned that in the re-established Monastic Universities in India, there are 10,000 monks and nuns who are trained and equipped to teach the ancient Indian wisdom.

“Now we have ten thousand monk students who have studied this tradition for twenty to thirty years.” He added that they are available to teach the ancient knowledge among Indians.

“I am hoping this knowledge should be used by our Indian friends.”

At the age of 83, His Holiness said he has committed himself —with the help of the monastic community—to revive the ancient Indian knowledge through education based on the Indian secular understanding.

“My latest commitment is to revive this knowledge through education, not through puja. Of course that is part of Indian culture, but real culture is the knowledge that is within. That is India’s culture.”

He asserted that ancient Indian knowledge is not only relevant but valuable in today’s world where societies are fundamentally facing an emotional crisis.

“The Nalanda tradition does not only contain the explanation of Buddhism as a religion, it encompasses a profound explanation on understanding of human psychology, emotions and how to tackle them.”

The entire corpus of Buddhist texts could be classified into three: Science, mainly mind and emotion; Philosophy and Religion. Of which, His Holiness argued that the Buddhist science and philosophy can be introduced in education system as an academic subject on human mind and emotions.

Describing himself as a student of Nalanda, he paid tributes to the erudite Indian masters who introduced Nalanda tradition in Tibet. “In 8th century, Tibetan emperor married Chinese princess, but he realised that the most authentic and advanced Buddhist tradition exists in Nalanda. Therefore he invited the top scholar and logician Master Shantarakshita,, who introduced Buddha dharma according Nalanda tradition in Tibet.”

“India’s ancient knowledge is very useful to today’s world. Now in order to help other countries, first this knowledge should be revived in this country. You, Indians please pay more attention to your ancient knowledge on inner world. Without inner peace, we cannot achieve external peace,” His Holiness concluded.

The Indian delegation is currently participating in a three-day Conference on Tibetan studies organised by the Tibet Policy Institute of Central Tibetan Administration.