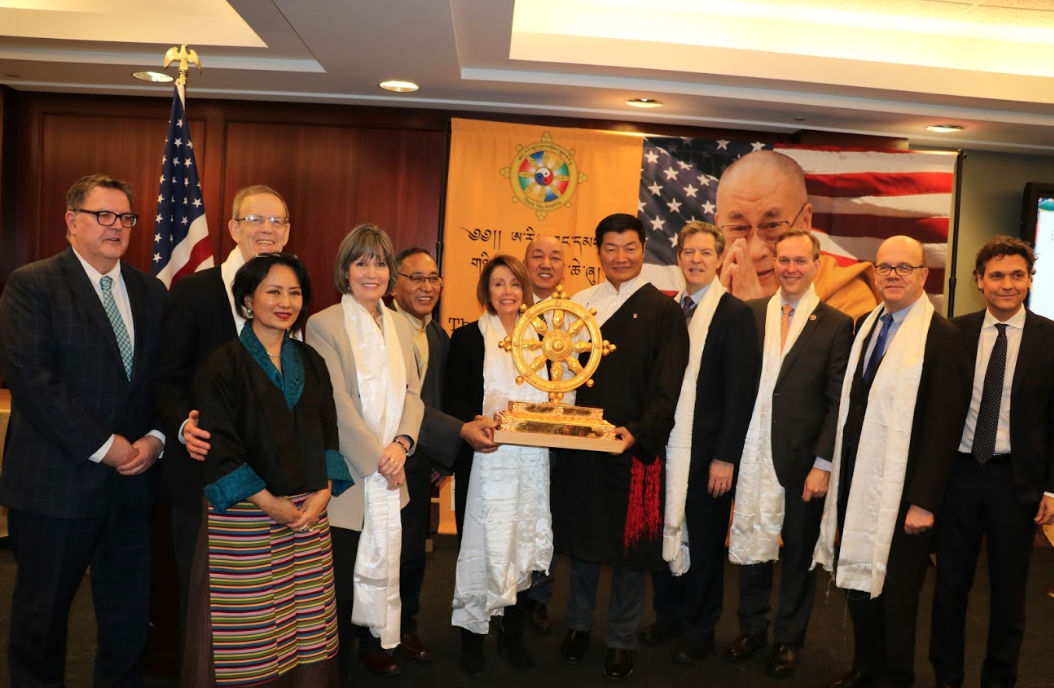 President Dr Lobsang Sangay, Central Tibetan Administration presents Wheel of Dharma souvenir to Speaker of US House of Representatives, Hon Nancy Pelosi to thank the government and people of the United States at Thank you America event, 12 February 2019. Photo/OOT DC

Washington DC, February 12 2019: Since Tibet was occupied by China sixty years ago, the United States has been an ardent supporter of the rights of the Tibetan people and the plight of the Central Tibetan Administration. This Tuesday, House Majority Speaker Nancy Pelosi and group of Members of Congress gathered to hear expressions of gratitude from the Tibetans and express their solidarity with the Tibetan people. This gathering was a part of the Central Tibetan Administration’s yearlong gratitude campaign and organized by the Office of Tibet, the International Campaign for Tibet, and the Capitol Area Tibetan Association.

The Thank You America event began with a prayer for world peace by Khenpo Samdup and a performance of the American and Tibetan national anthems. This was followed by remarks given by various member of Congress including Speaker of the House Nancy Pelosi. Speaker Pelosi reaffirmed the United States’ support for the people of Tibet, saying, “unless we speak out bravely, we lose all moral authority.” Dharma Wheel souvenir was presented to the Speaker Pelosi to Thank the government and people of the United States.

One of the highlights of the evening was a video message from His Holiness the Dalai Lama in which His Holiness thanked the American government for their support throughout the past sixty years. The United States, His Holiness said, “has been there for us and supported our just cause clearly right from the start.” He concluded by reminiscing over the various American political figures he has met throughout his life, adding that, “the Tibetan people will never forget their kindness.”

Another important address came from Dr. Lobsay Sangay, the President of the Central Tibetan Administration. Dr. Sangay urged for the appointment of a Special Coordinator for Tibetan Issues by the Trump Administration, as the position has remained vacant since 2017. Sangay also told the audience that, “Tibet and the Tibetan people have always found a true friend in the USA,” and informed the audience that a resolution to Tibet issue is “not so far” away.

Congressman Jim McGovern, Congresswoman Eleanor Holmes Norton, Congresswoman Betty McCollum, Congressman Ben McAdams, Congressman Tom Suozzi also gave impassioned speeches thanking the Tibetan people for their contributions to American society and stating their continued commitment to truth, human rights, and justice in Tibet. Other speakers of the evening included the US Ambassador of Religious Freedom Sam Brownback, the President of the International Campaign for Tibet Matteo Mecacci, the President of the National Endowment for Democracy Carl Gershman, Members of the Tibetan Parliament-in-Exile Pema Chagzoetsang and Tsewang Rigzin. Representative of His Holiness the Dalai Lama Mr. Ngodup Tsering provided the closing remarks and the Vote of Thanks who was joined by Presidents of Tibetan Associations in the US.

Around two hundred individuals ranged from all ages and political backgrounds, including House and Senate Staffers, advocates of human rights, representatives of Tibetan Associations in the US and Chinese intellectuals and scholars attended the event. James Maloney, Member of Parliament, Canada was also present at the event. Between several of the evening’s remarks, Tibetan musicians from Capitol Area Tibetan Association beautifully displayed and celebrated Tibet’s unique cultural heritage. Additionally, the famous American cellist Michael Fitzpatrick showcased a spectacular performance.

This commemoration comes on the heels of a successful year for Tibetan advocacy in the United States in which Congress recently passed the Reciprocal Access to Tibet Act sponsored by Congressman Jim McGovern and Congressman Randy Hultgren in the house; Senator Marco Rubio and Tammy Baldwin in the Senate; and signed into law by the President Donald Trump.

Tibet issue has a very high level of support in the US, a fact which warranted the gracious tone of the evening’s events and with this expression of gratitude, the United States reaffirmed their commitment to the issue of Tibet. As Speaker Pelosi noted during her remarks, “we have more to do.” 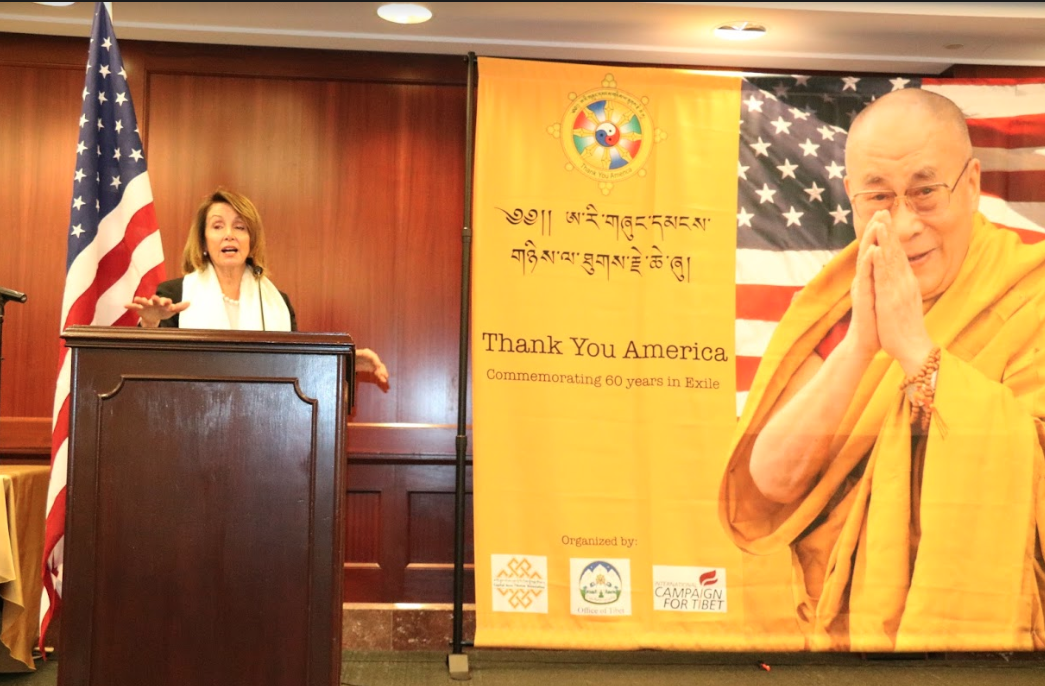 peaker of US House of Representatives, Hon Nancy Pelosi speaking at the Thank you America event organized by the Office of Tibet, the International Campaign for Tibet, and the Capitol Area Tibetan Association. 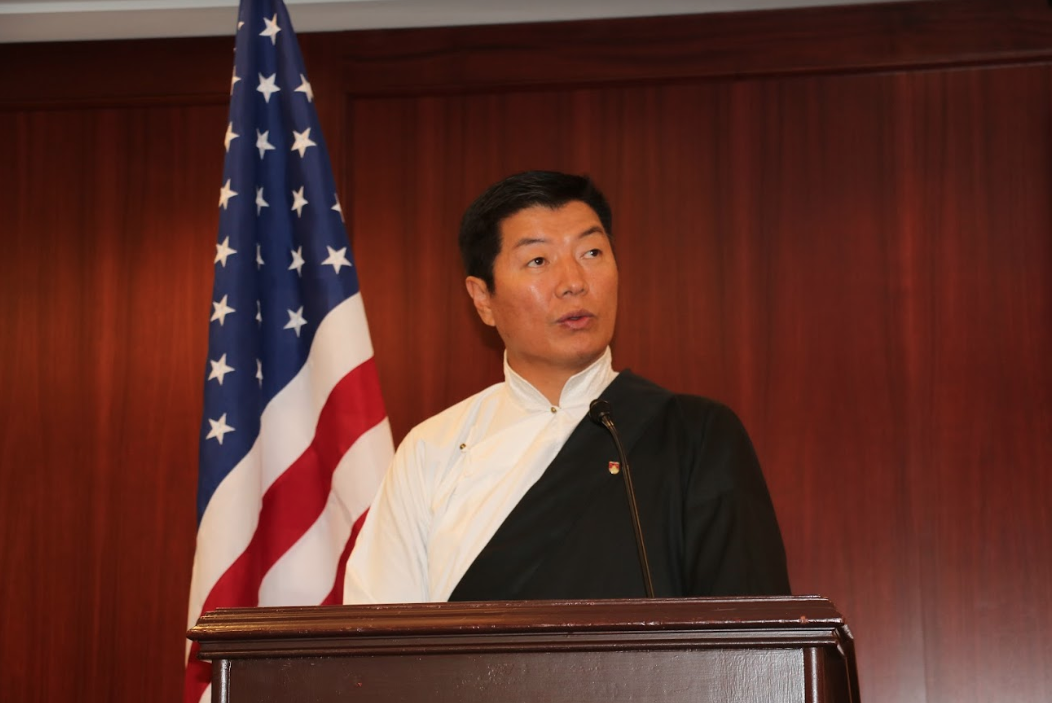 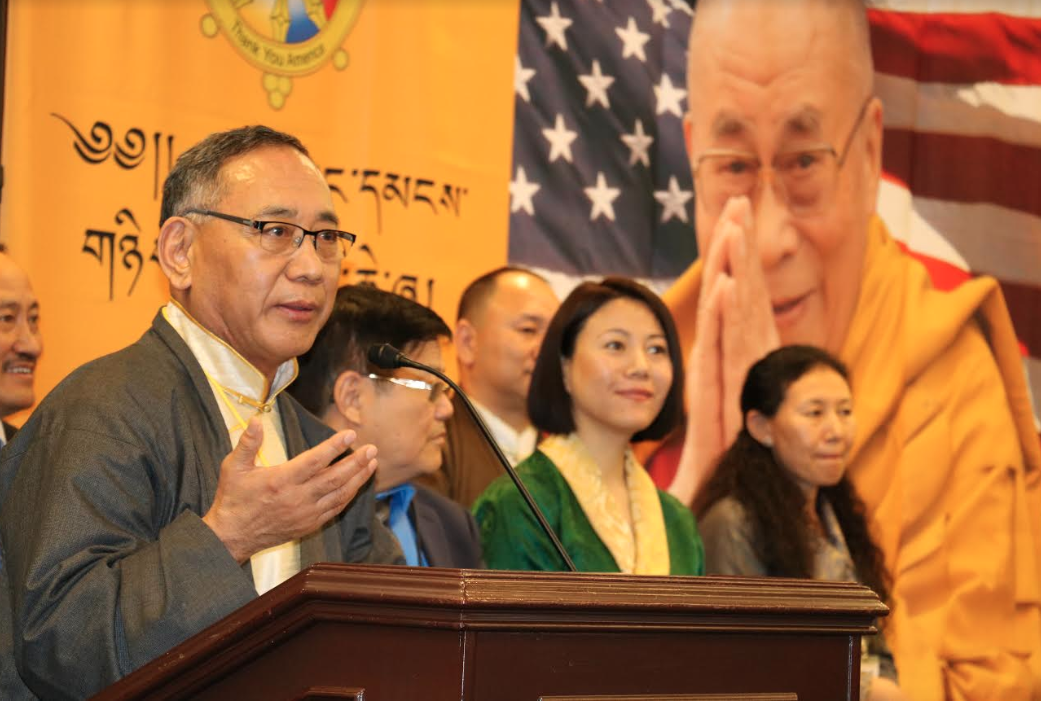 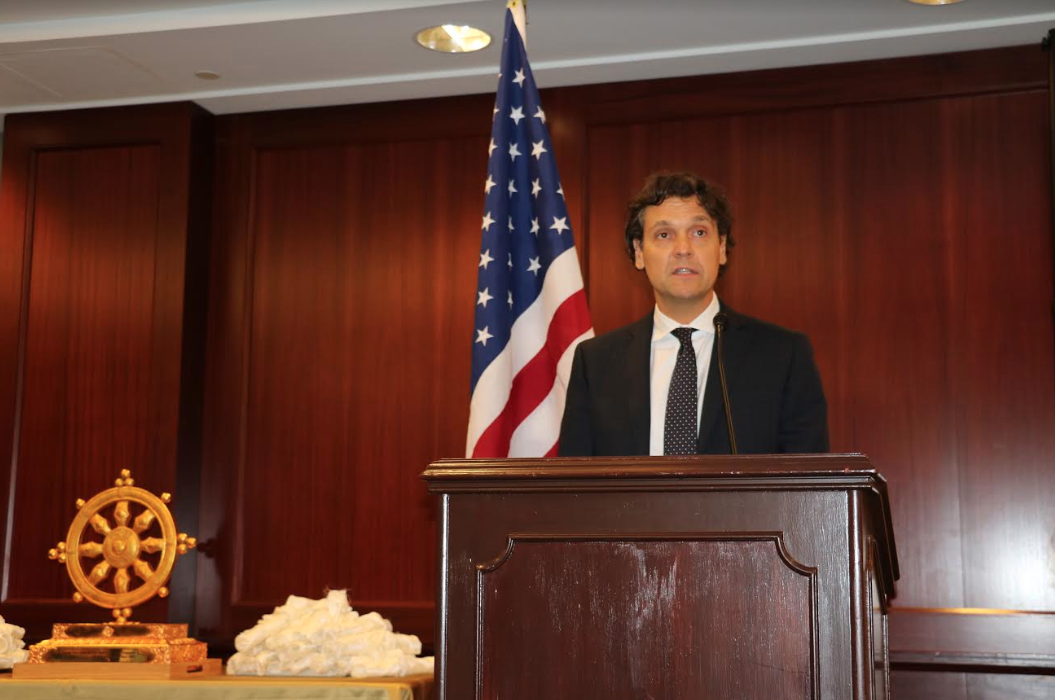 Matteo Mecacci, President of the International Campaign for Tibet addressing the Thank you America event. 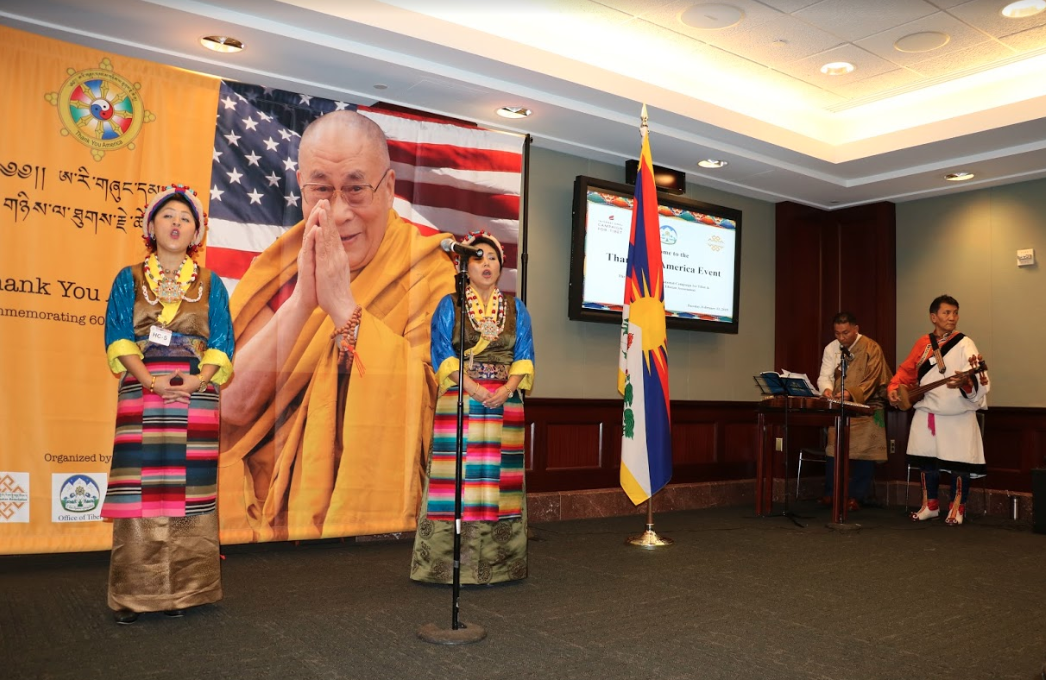 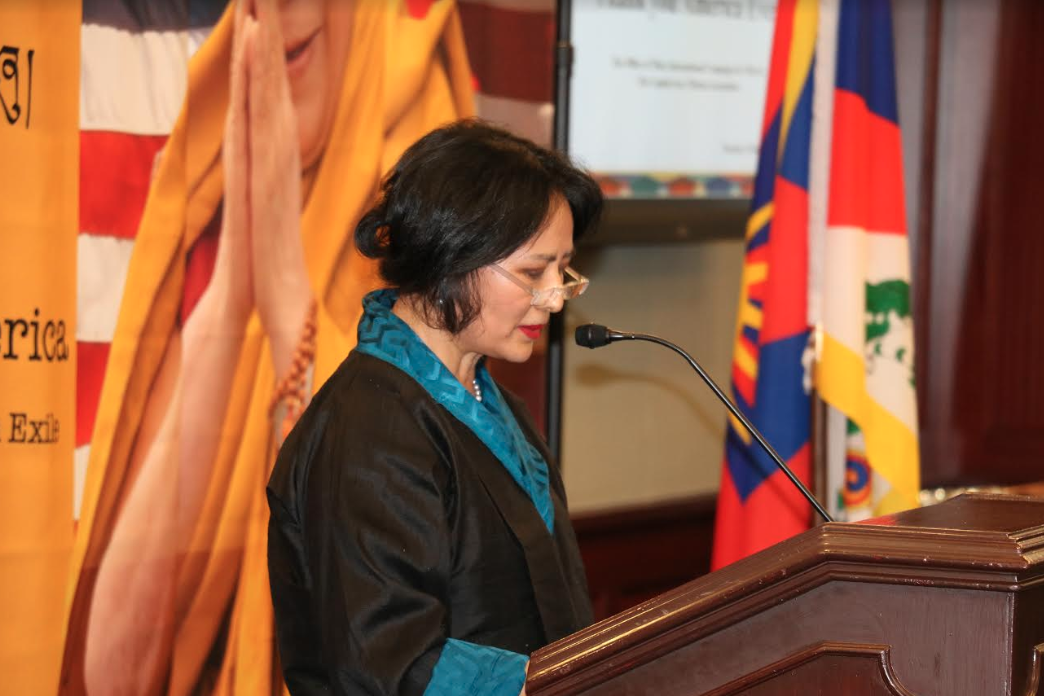 Member of the Tibetan Parliament-in-Exile Pema Chagzoetsang speaking at the Thank you America event. 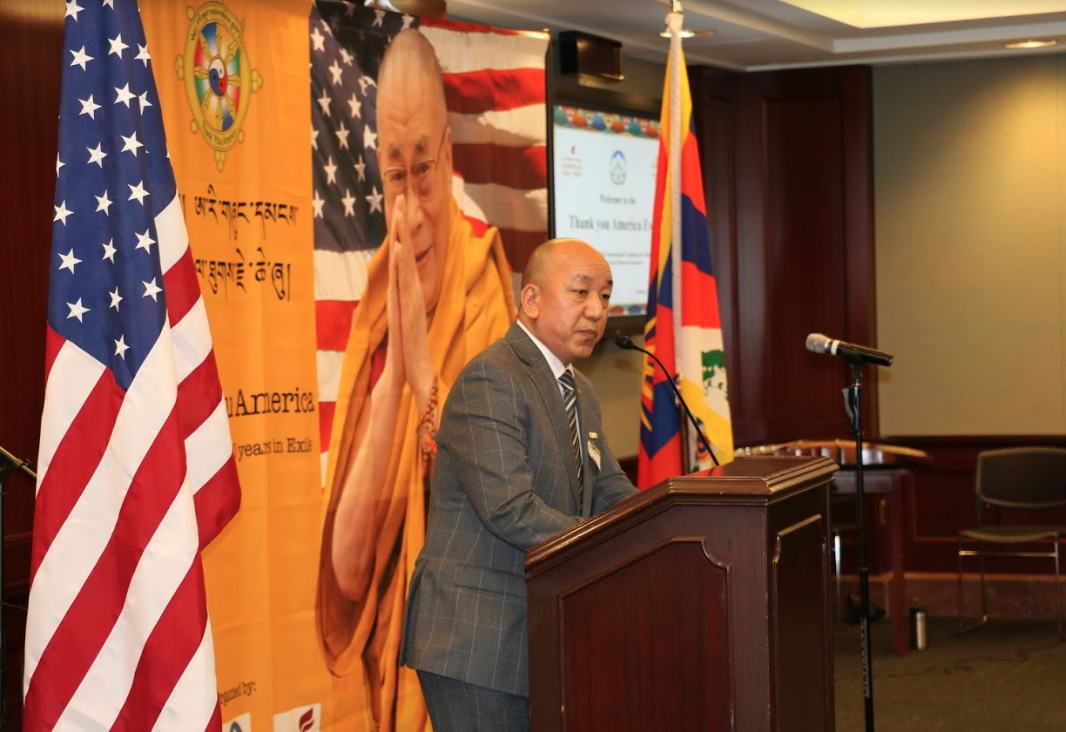 Member of the Tibetan Parliament-in-Exile Tsewang Rigzin speaking at the Thank you America event.