“Human rights with Chinese characteristics” already at the U.N. 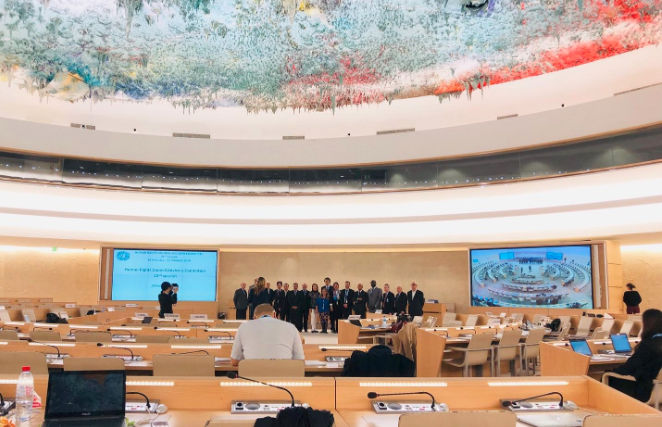 Human Rights Council Advisory Committee members pose for a group photo at the 22nd session at the U.N. in Geneva, Switzerland.

By Kunchok Dolma Yaklha, Special Appointee for Human Rights
China has been heavily promoting its “human rights with Chinese characteristics” agenda, which places development over human rights, on the international stage.
The efforts continued at the recently concluded 22nd session of the Human Rights Council (HRC) Advisory Committee in Geneva.
A great deal of the Advisory Committee’s discussion revolved around “the contribution of development to the enjoyment of human rights” (Resolution 35/21) and “the importance of a legally binding instrument on the right to development” (Resolution 39/9).
Following the adoption of China’s resolution entitled, “The contribution of development to the enjoyment of all human rights” at the 35th session of the HRC back in June 2017, the Advisory Committee had been requested by the Council to “conduct a study on the ways in which development contributes to the enjoyment of all human rights by all, in particular on best experiences and practices.”
While most resolutions are generally adopted without a vote, the United States called for a vote and voted no, citing major concerns that China’s resolution is “attempting to reframe the relationship between development and human rights in a way that deviates from consensus texts adopted by the UN Member States.”
Unfortunately, China’s resolution was adopted by a vote of 30 in favour to 13 against (United States, Albania, Belgium, Croatia, Germany, Hungary, Japan, Latvia, Netherlands, Portugal, Slovenia, Switzerland, and United Kingdom), with 3 abstentions (Georgia, Korea, Panama).
At the Advisory Committee’s recent meeting, China stated that the right to development is a “precondition for other rights” which has not been given “adequate attention.”
Some of the expert members of the Committee questioned why so many initiatives were being directed towards creating a legally binding instrument on the right to development, noting that it diminishes the value of important human rights treaties that are already in place. For example, the International Covenant on Economic, Social and Cultural Right.
Very few civil society members were present to participate in this important session.
I expressed concerns that the discussion about the contribution of development to the enjoyment of human rights fails to consider examples of negative practices whereby states can use development as an excuse to violate human rights.
“If you are talking about development and human rights, the Vienna Declaration and Programme Action is an important human rights document which makes it clear that you can’t use development as an excuse to violate human rights,” I added.
Mikhail Lebedev, Rapporteur of the Drafting group, responded, “If we are to focus too much on negative experiences in development then we will have too much research because there are many negative facets which we all are aware of.”
I said, “If you’re constructing a building and it needs 4 pillars for building safety, I wouldn’t expect anyone to say, ‘No, let’s just build 3 pillars because there’s not enough time or space.’ ”
“We need to take a step back and appreciate the fact that development is a highly contested concept. Given this, we must assess the risks of states using development as a tool to absolve themselves from human rights obligations.”
I went on to share the realities of Tibetan nomads whose traditional lives are being destroyed by China’s so-called development policies.
“Since 2006, over 2 million Tibetans have been relocated under China’s efforts called “Building a New Socialist Countryside,” claiming to improve the living standards of rural Tibetans and boosting the local economy. In 2013, Human Rights Watch published a comprehensive 115-page report documenting the extensive human rights violation of Tibetan nomadic communities. It found that a large number of nomads were relocated with the use of force and threats. There was also no prior consultation, or any alternatives provided.”
“So, the contribution of development to the enjoyment of human rights has to also assess the contribution of development to the violation of human rights,” I concluded.