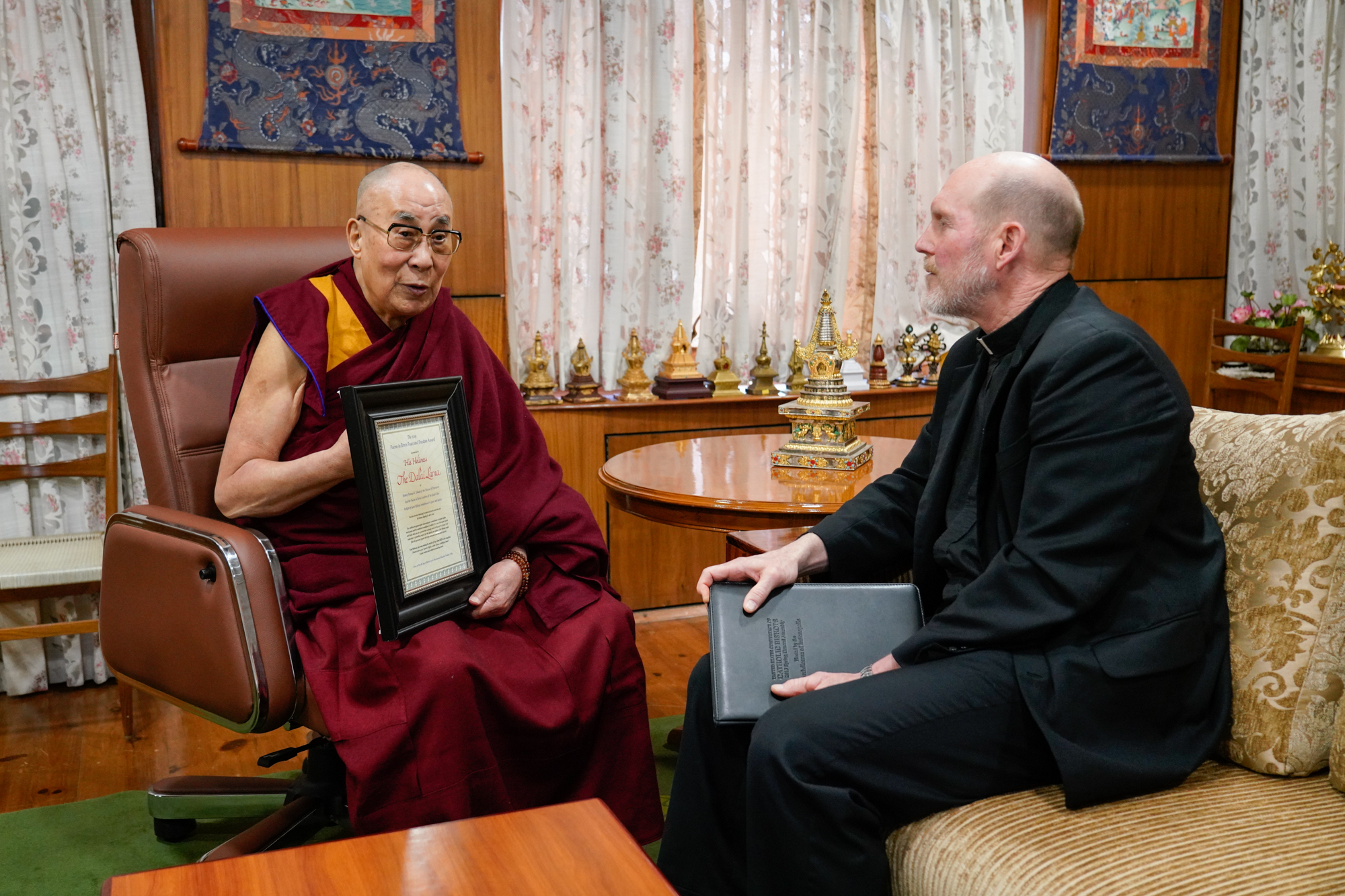 Bishop Thomas Zinkula, who heads the Diocese of Davenport traveled over 7,200 miles from Davenport, Iowa to Dharamsala to present The Pacem in Terris Peace and Freedom Award to His Holiness the Dalai Lama, March 4, 2019. Photo/Tenzin Jamphel/OHHDL

Dharamshala: Rev. Thomas Zinkula, Bishop of Davenport, Iowa traveled over 7,200 miles to Dharamsala to present The Pacem in Terris Peace and Freedom Award to the Tibetan spiritual leader, His Holiness the Dalai Lama on 4 March.

The Pacem in Terris Peace and Freedom Award is presented by the Davenport Catholic Interracial Council in collaboration with 11 religious organization to honour an individual for achievements in peace and justice, not only in their country but in the world.

The first Pacem in Terris award was given to John F. Kennedy in 1964.

Presenting the award on the Tibetan spiritual leader at his residence, Bishop Zinkula said, “The coalition recognizes your vision and your commitment to human rights, world peace and the nonviolent resolution of conflict. It is clear from your words and deeds that you are a person who is deeply rooted in the spirit of peace. Your leadership to promote respect for the dignity and culture of the Tibetan people fills all oppressed people with hope that peace can overcome injustice.”

“Your Holiness, you truly embody the words of Pope John XXIII in his encyclical Pacem in Terris as a ‘spark of light, a center of love, a vivifying leaven’ to your sisters and brothers around the world.”

The Davenport diocese said His Holiness the Dalai Lama accepted the award with humility, stating that it recognizes his “little contribution” to world peace as did the Nobel Peace Prize.

During the 10-minute audience, His Holiness greeted Bishop Zinkula and expressed appreciation for the award and for the interfaith composition of the coalition that nominates award recipients.

While it is important “to have world leaders accept the award in person so that they can share their message face to face with the people, “we needed to take the opportunity to go to India to honor him,” said Kent Ferris, who leads the Pacem in Terris Coalition. Martin Luther King, Jr., Desmond Tutu and Dorothy Day are among the internationally known recipients of the award.

Bishop Zinkula said he was willing to travel halfway across the world to present the Pacem in Terris Peace and Freedom Award to him because “he is the Dalai Lama. He has been promoting inner peace and world peace his entire life.”

In his short meeting with His Holiness, the Bishop said he could see that the 83-year-old Dalai Lama was mentally sharp and engaged.

“There was a sense of vigor and vitality about him,” he told The Catholic Messenger, Davenport’s diocesan newspaper. “He gave me his undivided attention while I spoke about the award and presented it to him. He exuded a sense of peace, love, joy and warmth.”

According to the Davenport diocese, His Holiness was pleased when the bishop identified the groups – Christians, Jews and Muslims among them – who represent the interfaith coalition. Speaking in English, His Holiness described the award as a “great honor.”

A local celebration of the ceremony will be held on April 9 in Davenport where Bishop Zinkula will reflect on the award presentation he made to His Holiness the Dalai Lama.