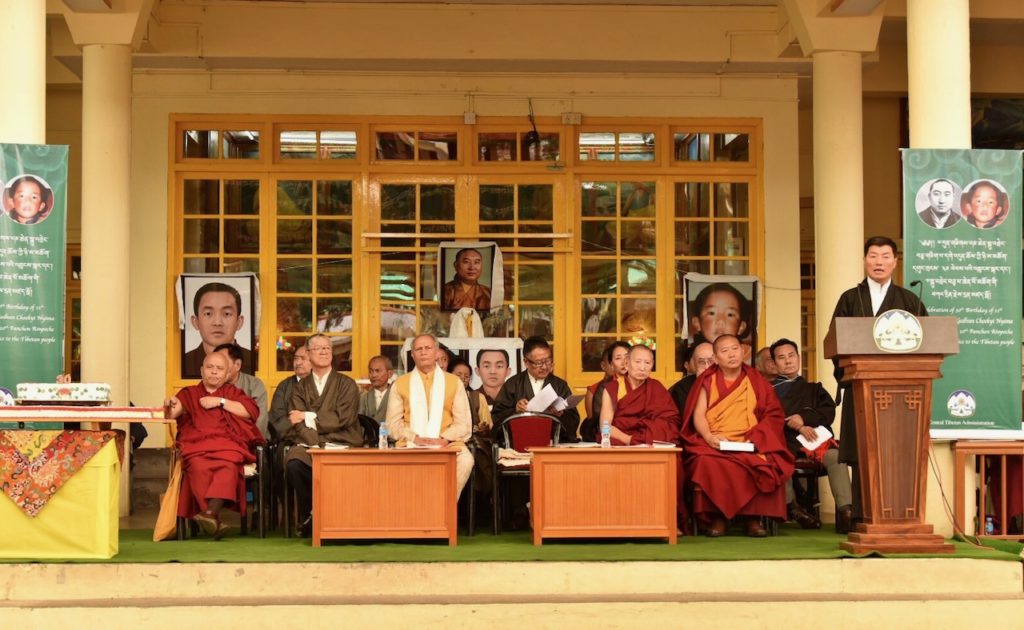 President Dr Lobsang Sangay addressing the celebration of the 30th birth anniversary of the 11th Panchen Lama and gratitude to the 10th Panchen Lama at Tsuglagkhang, 25 April 2019. Photo/Tenzin Phende/CTA

In a solemn ceremony at the headquarters of His Holiness the Dalai Lama, hundreds of Tibetans and supporters marked the 30th birth-anniversary of the 11th Panchen Lama in absentia.

The second highest spiritual leader of the Tibetans after the Dalai Lama, Gedhun Choekyi Nyima was abducted by the Chinese authorities on 17 May 1995, just three days after His Holiness the Dalai Lama declared him to be the reincarnated Panchen Lama. He has not been heard from since.

Gedhun Choekyi Nyima was six years old then and remains today the youngest political prisoner in the world.

President Dr Sangay remembered the great 10th Panchen Lama as a true martyr of Tibet who till his last breath committed to serving the aspirations of the six million Tibetans and the noble wishes of His Holiness the Dalai Lama.

“The 10th Kunsik Panchen Lama fought for the freedom and welfare of Tibetans until his last breath. At the tender age of 24, he showed courage and submitted the 70,000-Character Petition to Zhou Enlai and other top Chinese leaders. The petition recorded the atrocities suffered by Tibetans and the destruction unleashed on the Land of Snows since its invasion by the Peoples’ Liberation Army,” he said.

On May 18, 1962, the 10th Panchen Lama presented to Mao Zedong and other Chinese leaders the 70,000 Character Petition, a document that thoroughly assessed the nature of Chinese occupation in Tibet and elaborately explained the Tibetan people’s grievances and suggested measures to uplift them from political repression. The petition also exposed the Chinese government’s use of routine propaganda regarding revolution, liberation, democratic reform and the so-called ‘socialist paradise’ as “pure deception.”

Dr Sangay further said: “The 10th Panchen Lama’s lifelong mission to protect and promote the spiritual, political, social and economic wellbeing of his beloved people and to fearlessly stand up for the freedom and dignity of every Tibetan is an inspiration to all.”

In his categoric remarks, the Tibetan president strongly criticised the Chinese government for brazen interference in the centuries-old Tibetan tradition of reincarnation particularly of the Dalai Lamas and Panchen Lamas and stated that China had no legitimate authority over religious and spiritual affairs of the Tibetan people.

“It is absolutely ridiculous and unacceptable for an officially atheist government and one with history of outrageous persecution of religious, linguistic and basic rights of the Tibetan people to interfere in the centuries-old Tibetan Buddhist religious tradition of reincarnation,” he said. 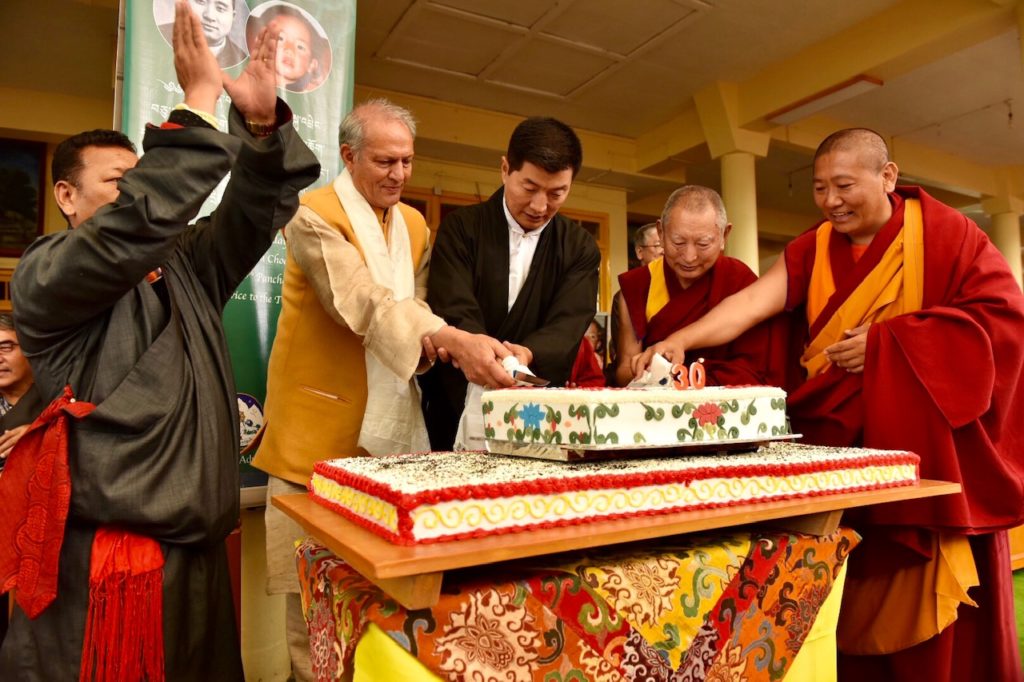 He reiterated that the Chinese government’s demand for respect, love, and admiration will only be reciprocated when they take a sensible step of releasing the 11th Panchen Lama who was arbitrarily arrested by the Chines authority along with his family.

“It is the lack of compassion that the Chinese government is so unaware of which makes them commit horrendous atrocities against Tibetans,” asserted Ajay Singh.

He was hopeful that Tibetan people led by His Holiness the Dalai Lama will return to Tibet in honour.

Special guest Kasur Kirti Rinpoche called for unity among Tibetans, to solidarily strengthen the support for the immediate release of 11th Panchen Lama by launching campaigns that are more efficacious than any previous campaigns.

“It is the very motive of the Chinese government to create disputes and destroy the unity of the Tibetan people” asserted Kasur Kirti Rinpoche. “This explains the sudden disappearance of 11th Panchen Lama and imposing one of their own because the 11th Panchen Lama’s disappearance meant an unquestionable control over the reincarnation of both the Dalai Lama and Panchen Lama.”

“However, even if the Chinese government was successful in replacing 11th Panchen Lama with another young Tibetan boy, they have shown their distrust in the boy as confinement and restriction falls upon him too,” said Kasur Kirti Rinpoche. 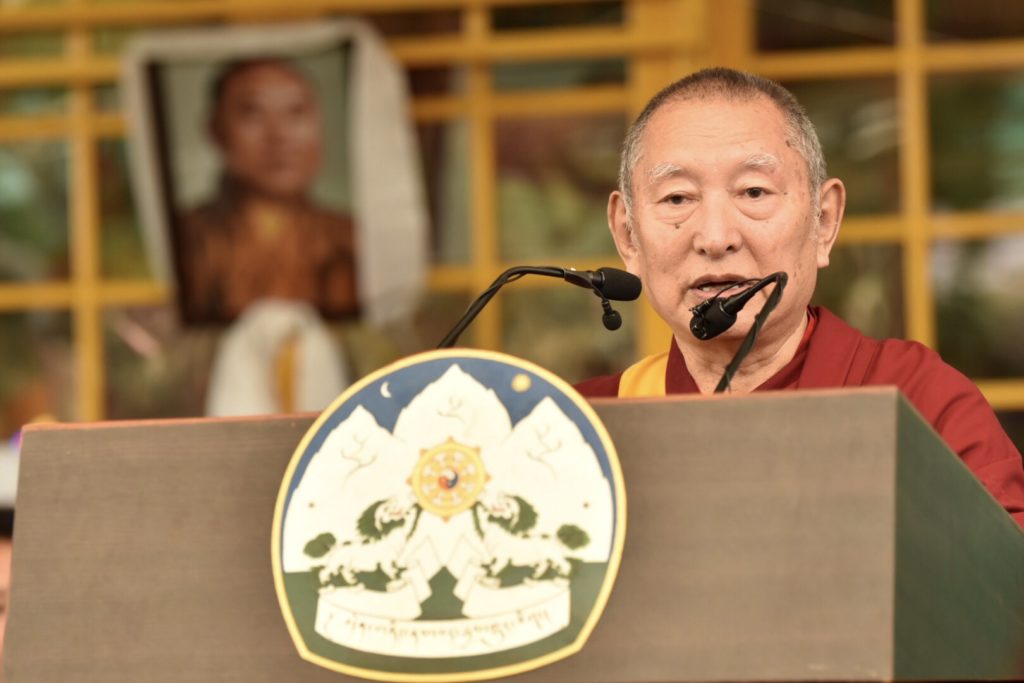 Kasur Kirti Lobsang Tenzin Rinpoche speaking at the celebration of the 30th birth anniversary of the 11th Panchen Lama and gratitude to the 10th Panchen Lama at Tsuglagkhang, 25 April 2019. Photo/Tenzin Phende/CTA

“I hope and pray that may the 11th Panchen Lama be released soon and may he returns to Tashi Lhunpo monastery where lies the seat of Panchen Lama,” said Kirti Rinpoche.

In his tribute, Deputy Speaker of Tibetan Parliament-in-Exile, Acharya Yeshi Phuntsok said the 10th Panchen Lama was not only a spiritual leader to Tibetans people, but one of the greatest voices for the Tibetan people who remained deprived of their fundamental rights under Chinese rule and led them through the most difficult period in history.

“Throughout his life, the 10th Panchen Lama worked relentlessly to protect the religious freedom of Tibetan people, promoting the acceptance of Tibetan as the official language, promoting rights to education and seeking genuine self-governance for the Tibetans inside Tibet.”

“As a result, he was subjected to extreme physical and mental torture during and after the Cultural Revolution and was imprisoned for nine years from 1968 to 1977 but even after release, he continued to criticize the flawed policies of the Chinese government on Tibet and remained committed to serve the Tibetan people till he passed away under mysterious circumstances at his monastery in Shigatse, Tibet.”

Ngachen Rinpoche Tenzin Tsultrim, representative of Tashi Lhunpo Monastery, South India said: “The successive throne holders of Panchen Lama lineage have contributed immensely to the great spiritual tradition of Tibet and to the welfare of all sentient beings. However, the 10th Panchen Lama was one of the greatest lifelong advocates of Tibetan Buddhism and culture and worked tirelessly to preserve the rich Tibetan linguistic tradition during a crucial period in Tibet’s recent history.”

“The fact that we have a movement for the preservation of the Tibetan language and the right to self-governance in Tibet at this moment is a legacy of his hard work and contribution.”

Since 1995, thanks to the efforts of the Central Tibetan Administration and Tashi Lhunpo Monastery the issue of the disappearance of the Panchen Rinpoche has been raised in the United Nations Human Rights Council, the UN Convention for the Rights of the Child and in international parliaments throughout the world, he said.

In addition, he condemned China’s interference in Tibetan reincarnation system as an assault to Tibet’s historic Buddhist tradition. 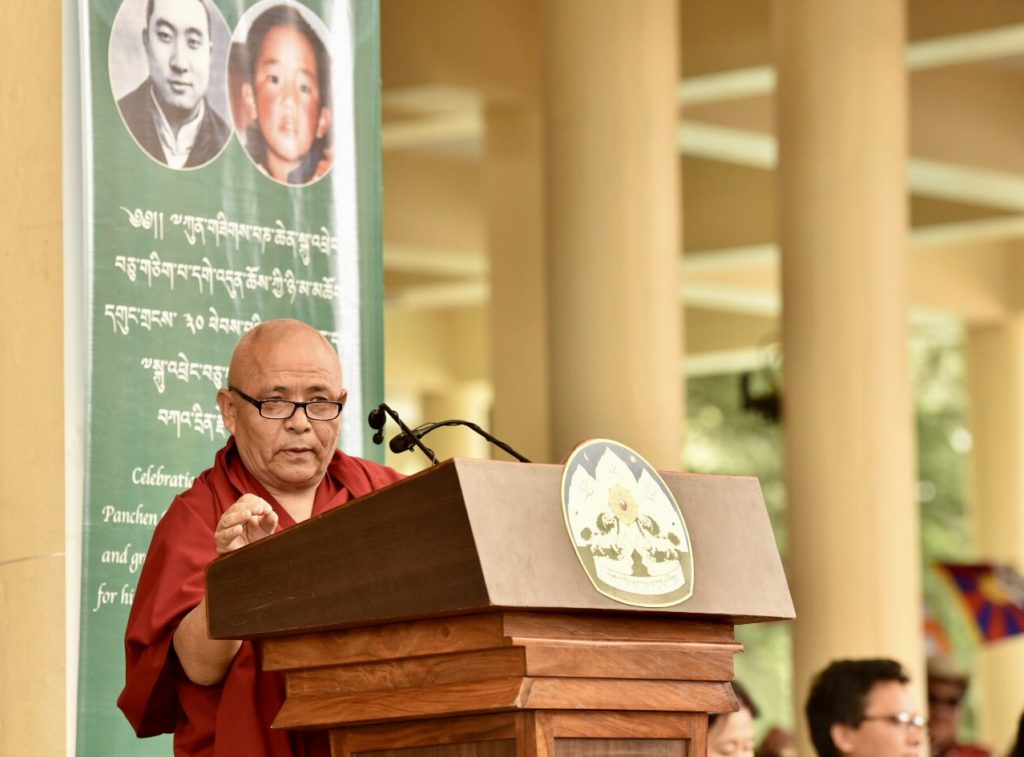 Deputy Speaker of Tibetan Parliament-in-Exile speaks at the celebration of the 30th birth anniversary of the 11th Panchen Lama and gratitude to the 10th Panchen Lama at Tsuglagkhang, 25 April 2019. Photo/Tenzin Phende/CTA 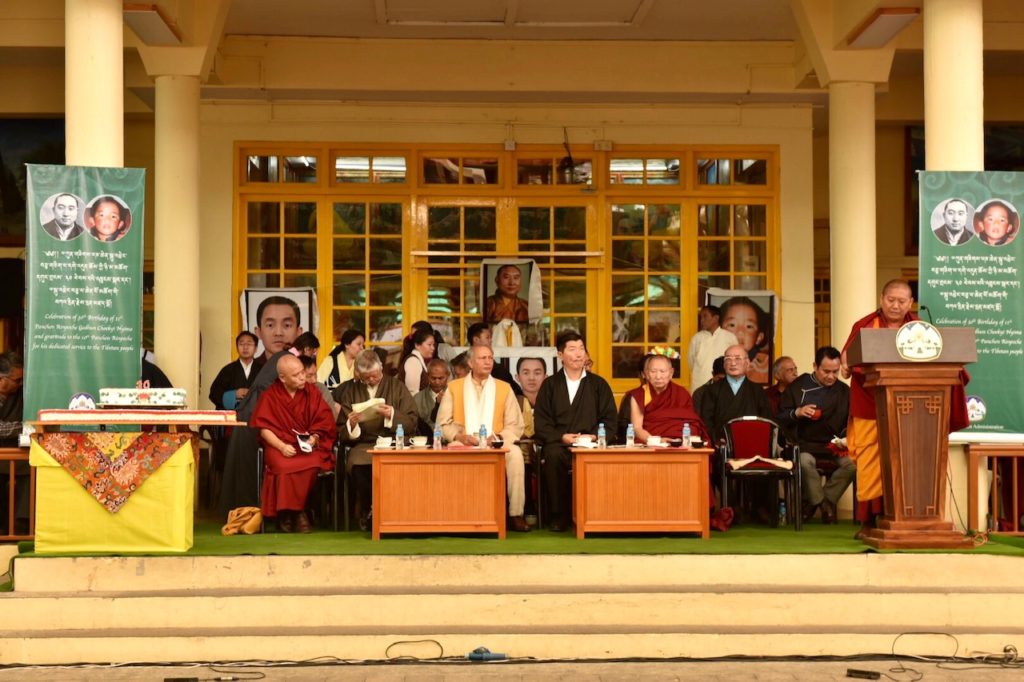 Ngachen Rinpoche, representative of Tashi Lhunpo Monastery in Karnataka addressing the celebration of the 30th birth anniversary of the 11th Panchen Lama and gratitude to the 10th Panchen Lama at Tsuglagkhang, 25 April 2019. Photo/Tenzin Phende/CTA 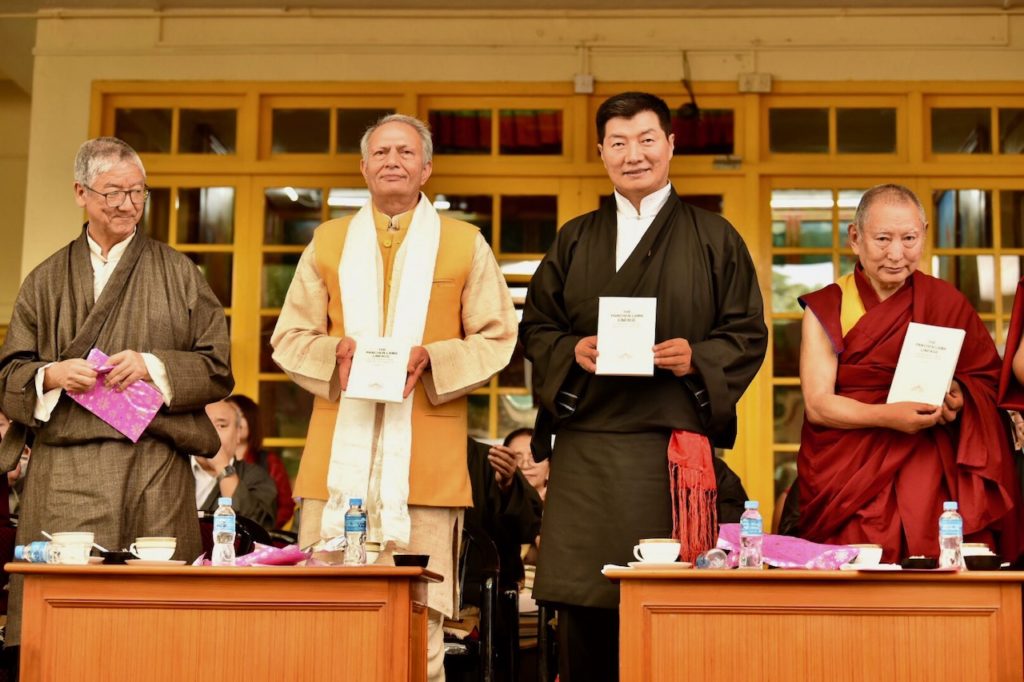 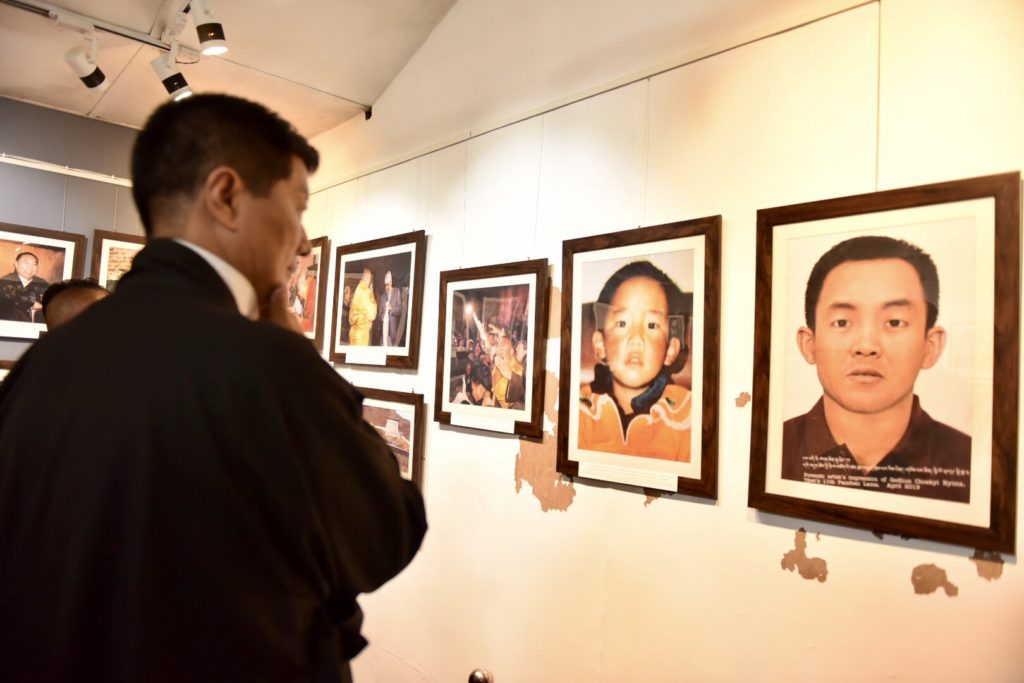