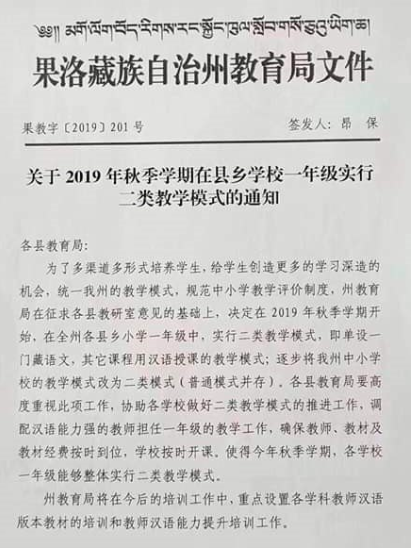 The Official notice issued by Golog Prefecture Education Department directing all primary and middle school classes to conduct lessons in Chinese language instead of Tibetan. Image obtained from Free Tibet.

Dharamshala: Chinese authorities in Golog (Chinese: Guoluo), in the traditional Amdo province, have ordered all primary and middle schools in the Golog Tibetan Autonomous Prefecture to stop teaching in Tibetan language. Only the Tibetan language class can be taught in Tibetan whereas the medium for teaching other classes will be in the Chinese language, the Golog Prefecture Education Department instructed the schools in a new directive issued recently.

This directive is set to be implemented in autumn this year which means that when the schools reopen after the summer break, Tibetan children from 1st to 9th grade in Golog will have only the Tibetan language class to learn and use their native language in schools.

An image of the new directive (in Chinese) released by the UK-based organization Free Tibet clearly instructs the schools to treat the order with great importance and claims that the move aims to “provide more academic opportunities for the students”. According to reliable sources, Tibetan intellectuals and students in Tibet have expressed their objection to this order with some even taking to social media to voice their concerns.

The official notice further states that workshops will be conducted for teaching materials for the subjects in Chinese and to increase the proficiency of teachers to teach the subjects in Chinese. Schools have also been directed to assist in promoting this teaching model and allocate teachers proficient in Chinese language to teach first grades, said the order signed by Ang Bao, the head of the Golog Prefecture Education Department.