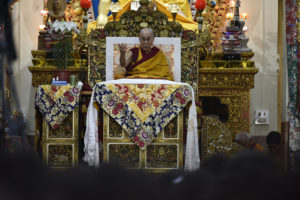 His Holiness the Dalai Lama teaching on Gyalsey Thokme Sangpos’s Thirty-Seven Practices of a Bodhisattva to the Tibetan youth at the main temple. Photo/Tenzin Jigme/CTA

Dharamshala: His Holiness the Dalai Lama accorded one-day teaching on Gyalsey Thokme Sangpos’s Thirty-Seven Practices of a Bodhisattva(laklen sodunma) in the morning for Tibetan youth at the main Tibetan temple today.

His Holiness began the teaching by reflecting back to the historical time when the first civilization of human beings originated. He further spoke about the 7th-century king of Tibet, Songtsen Gampo who invented Tibetan script based on India’s Sanskrit script and later during the reign of King Trisong Dhetsen of Tibet, on the advice of Shanta Rakshita, the Tibetan language was first used as the medium to instill and spread Buddhism in Tibet. Likewise, many works of literature and texts covering vast and profound knowledge of ancient Indian literature were also translated into Tibetan.

His Holiness remarked that he is eternally indebted to the ancient Nalanda masters and scholars.

He also admired and extolled on the secularism in India for its potential to promote freedom of every individual to whether or not practise a religion.

Admiring the great 17 masters of Nalanda tradition, His Holiness said “we can tell it from their writings that they are great masters, not by their miracles or anything like that. The great writings of the masters can still be studied to date”.

His Holiness elaborated Buddha’s three turnings of the wheels of Dharma and emptiness according to which, the emptiness refers to not nothingness but something which we can not identify when we further break down the object that we can see, which also means they do not exist the way they appear to us. This concept of emptiness is also accepted in Quantum Physics. 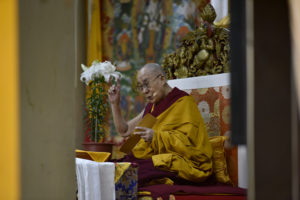 His Holiness the Dalai Lama explaining about Buddha’s three turnings of wheels of Dharma and emptiness. Photo/Tenzin Jigme/CTA

His Holiness emphasised on studying Tibetan Buddhisms through logic, reason, and debate. He highlighted the importance of Logic to develop the understanding and Intelligence of an individual.

” We should be proud of being Tibetan and descendants of our ancestors. Buddhism which came to Tibet from the Nalanda tradition, Logic, Psychology and Philosophy should not be regarded as a religion but academic subjects” advised His Holiness the Dalai Lama while encouraging to use these bits of knowledge to contribute towards the world peace.

His Holiness shared his experience of a series of discussions he has had with various scientists regarding psychology, working of mind and emotions and he noted that the discourse on these topics is already present in the Buddhist texts and literature.

His Holiness then thoroughly explained the thirty-seven practices of a Bodhisattva through text. He elaborated certain points in the text while talking about Ignorance, emptiness, mental afflictive, and cognitive obscuration. ” Attachment, anger and so forth are the factors causing problems and difficulties. Likewise, selfishness within a family and a world at large creates many problems and difficulties too” attested His Holiness the Dalai Lama.

Explaining the three jewels, His Holiness mentioned that the Dharma Jewel is the most significant as an individual through the practice of Dharma could attain experiences of true cessation and true path. Through sincere study and practice of Dharma jewel, one can learn to reduce vices like anger, attachment, and jealousy, etc

His Holiness adviced to practice compassion towards others through the practice of giving and taking that is if somebody demeans you, taking others negativity within yourself while giving out compassion.

His Holiness also advised to restraint negative actions of body, speech, and mind for the well being of others.

His Holiness finally encouraged to study Buddhism as it comprises of the phenomenon of logic and reasoning.

“Tibetans in Tibet are very strong and have an undaunted spirit to preserve Tibetan Buddhism despite the unquestionable control exerted by the Chinese government on religion. But In exile, in a free country, we have the opportunity to preserve and promote the vast tradition of Buddhism so Do your best.” appealed His Holiness the Dalai Lama. 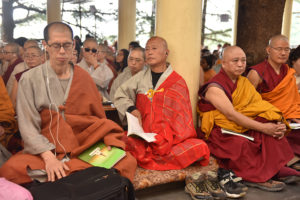 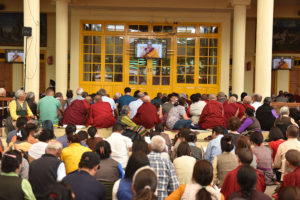 The teaching being live streamed for the crowd. Photo/Tenzin Jigme/CTA 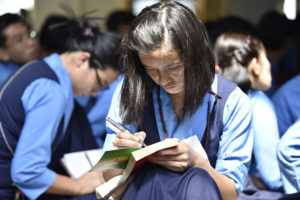 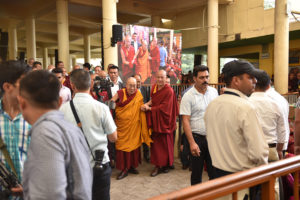 His Holiness the Dalai Lama returning to his residence after the teaching. Photo/Tenzin Jigme/CTA