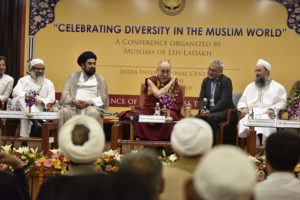 His Holiness the Dalai Lama and other prominient leaders and representatives of Muslim cmmunities at ‘Celebrating Diversity in the Muslim World’ conference at New Delhi. Photo/Tenzin Jigme/CTA

New Delhi: The Muslims of Ladakh took the initiative to organise the first ever national level Muslims conference titled ‘Celebrating Diversity in the Muslim World” at the India International Centre (IIC) in New Delhi. Representatives and leaders of various Muslims communities in India took part in robust discussions and dialogue to identify and address the differences of  Muslim communities in India. The goal is to recognise and promote intra-community unity and inter-community harmony amongst the Muslims in South Asia.

The initiative heavily draws its inspiration and motivation from His Holiness the Dalai Lama who from time immemorial has been a staunch believer in the potential of the Muslim communities in India and across the world in bringing reconciliation of differences caused in the name of Shia and Sunni.

His Holiness the Dalai Lama presided over the conference as the Chief Guest while other prominent figures at the conference were special guest former Vice President of India Mr. Hamid Ansari, Hafiz Gulam Mohammad and former Kalon Tripa Samdhong Rinpoche.

Also present at the event were key speakers, Abdul Qadir Moiz Nooruddin who is one an executive trustee on the Board of the Saifee Burhani Upliftment Trust, Maulana Kalbe Jawad Naqvi a Shina Muslim clerk and scholar from Lucknow, Maulana Mahmood Madani executive member, and leader of the JamiatUlama-i-Hind, Ali Khan Mehmudabad an assistant professor at Ashoka University, Farah Naqvi who served as a member of  National Advisory Council of NAC, Seema Mustafa who is one of India’s senior journalists and Chief Editor of The Citizen, and Mehmood ur-Rashid who is the opinion editor of Kashmir’s largest daily Greater Kasmir.

Mr. Siddiq Wahid, a senior fellow at the Centre for Policy Research in New Delhi who is also a former Vice Chancellor of Islamic University, Kashmir presented an introductory remark on the conference.

Speaking on how and why a minuscule population such as Ladakh has taken upon itself the initiative to organise ‘Celebrating Diversity in Muslim World’, Mr. Wahid pointed out some facts that depict Tibet’s ancient ties with the Muslim world such as the variance of Tibetan langue being spoken and its culture being adopted in no less than 4 of the 7 SARD countries including Nepal and India. In India, the variance of the language is used in Jammu and Kashmir, Sikkim, West Bengal, etc. Similarly, In Pakistan, the variance of the Tibetan language is spoken in Baltistan and in Bhutan’s Dzongkhag.

Another way to understand the presence of Muslims in the Tibetan civilisation as Mr. Wahid noted is through the study of the map where it shows the frontiers of Tibet are ringed by Muslim areas including the complex mountains surrounding Xinjiang’s Uyghur, Kazakistan, Uzbekistan and other Turkish speaking Muslim areas.

“It is, therefore, reasonable to assume that Tibetan culture would interact with the Muslim world,” said Mr. Siddiq Wahid.

His Holiness the Dalai Lama while addressing the gathering spoke on the three principle commitments of his life. His Holiness imparted some notable explanation on the basic human values and stated that all human beings by the very nature of creation want to survive and to survive happiness is the key factor. The basis of a happy life as His Holiness from time and again emphasised is human compassion as men being social animals cannot survive individually, is interdependent on the rest of the world.

“Compassionate atmosphere means the person lives happier and vice versa” claimed His Holiness the Dalai Lama while asking people to denounce anger and fear as it only eats away the immune system.

Being kind as His Holiness noted has nothing to do with religion but rather an act of sharing human values with the others.

His Holiness testified that Muslims are generally peace-loving people which His Holiness said he witnessed from the Muslims in Tibet. However, the unfortunate reality today His Holiness mentioned is the gross killings in the name of Shia and Sunni as it is happening in Afghanistan, Syria, and Yemen, etc. Such incidents are unthinkable and go against the concept of basic human nature. His Holiness thus urged for efforts in ushering a peaceful word through channelizing inner peace.

“Simply chanting slogans of the peaceful world won’t help unless the peace comes from within” advised His Holiness.

His Holiness then asked the participants of the conference to show the world in general but particularly the Muslims around the world that conflict in the name of religion is unnecessary and vain.

Former Vice President of India Hamid Ansari in his address commended the small but a significant step taken by the Muslims in Ladakh.

Mr. Ansari accounted that Muslims are united in their belief and their language of religion and this is best demonstrated at the time of pilgrimage to Hutch and Mecca.

He also describes how Islam has been in India from time immemorial depicting the adaptability, creativity and diversity while claiming they could become a model to ammulate in other multi-cultural and multi-religious societies around the world.

Later, a Q&A session was held between His Holiness and the participants where His Holiness answered questions relating to spirituality, philosophies and ethics etc followed by the addresses by the key speakers of the conference.

‘Celebrating Diversity in the Muslim world’ is a pilot initiative taken by the Muslims of Ladkah and is the first ever nation wide held conference on Muslims. The confernce is an effort to build awaress about the shared culture of Muslims around the wrold, to create intra-community and inter-commuity harmony amongst them. The conference is solely sponsored and funded by the Office of His Holiness the Dalai Lama. 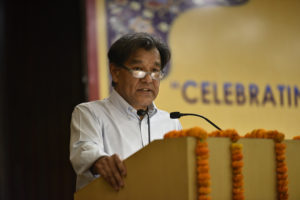 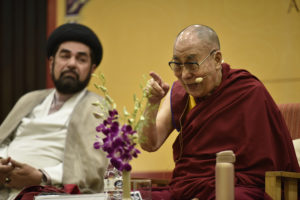 His Holiness the Dalai Lama recounting a funny experience and giggling. Photo/Tenzin Jigme/CTA 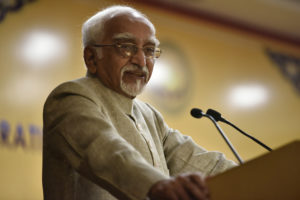 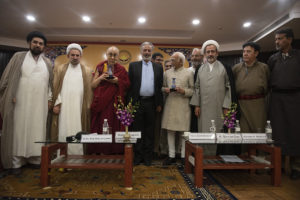 His Holiness the Dalai Lama and Mr Hamid Ansari with the key speakers of the conference. Photo/Tenzin Jigme/CTA