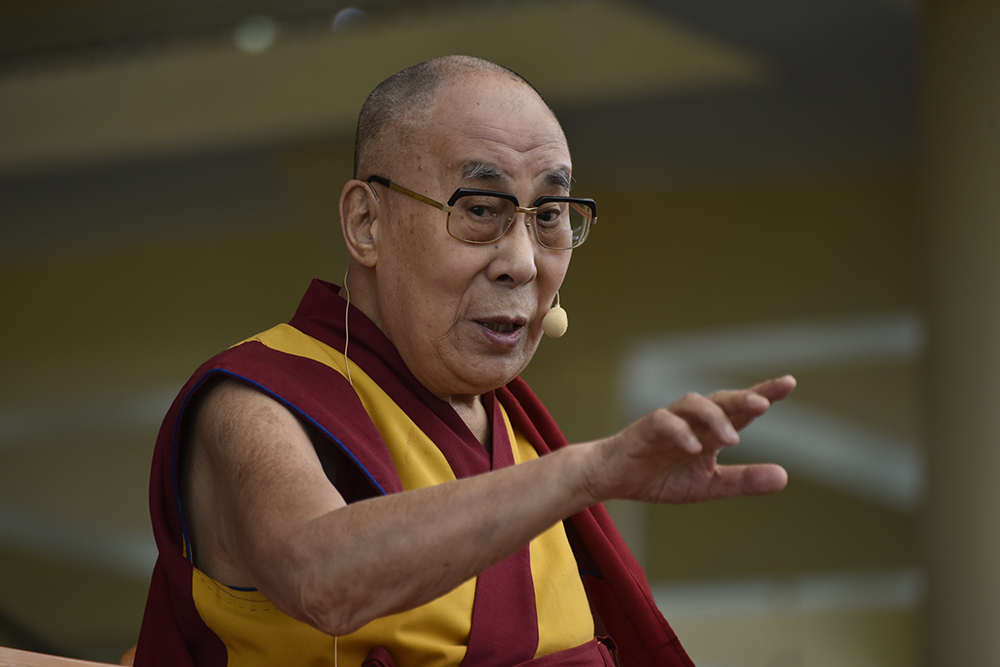 Remarks made by His Holiness the Dalai Lama during a recent BBC interview have caused disquiet that we felt it was important to address.

Firstly, in responding to a question about whether his own reincarnation could be a woman, and suggesting that if she were she should be attractive, His Holiness genuinely meant no offence. He is deeply sorry that people have been hurt by what he said and offers his sincere apologies.

His Holiness consistently emphasizes the need for people to connect with each other on a deeper human level, rather than getting caught up in preconceptions based on superficial appearances. This is something everyone who has the chance to meet with him recognizes and appreciates. The original context of his referring to the physical appearance of a female successor was a conversation with the then Paris editor of Vogue magazine, who had invited His Holiness in 1992 to guest-edit the next edition. She asked if a future Dalai Lama could be a woman. His Holiness replied, “Certainly, if that would be more helpful,” adding, as a joke, that she should be attractive. He was at least partially responding to the unfamiliar ambience of working with a team whose prime focus was the world of high fashion.

His Holiness, a monk now in his mid-eighties, has a keen sense of the contradictions between the materialistic, globalized world he encounters on his travels and the complex, more esoteric ideas about reincarnation that are at the heart of Tibetan Buddhist tradition. However, it sometimes happens that off the cuff remarks, which might be amusing in one cultural context, lose their humour in translation when brought into another. He regrets any offence that may have been given.

For all his long life, His Holiness has opposed the objectification of women, has supported women and their rights and celebrated the growing international consensus in support of gender equality and respect for women. Under his leadership, Tibetan nuns in exile have earned Geshe-ma degrees, indicating a high level of scholarship previously reserved only for male monks. His Holiness has frequently suggested that if we had more women leaders, the world would be a more peaceful place.

In the same BBC interview, His Holiness’s views about the current refugee and migration crisis may have been misinterpreted. He certainly appreciates that many of those who leave their countries may not wish or be able to return and that Tibetans, who cherish the idea of returning home, would find their country irrevocably altered. However, His Holiness also understands the uncertainties and difficulties of those in countries where refugees and migrants make their new homes. What His Holiness wrote in an op-ed piece for the Washington Post, June 13, 2016, captures the essence of his views on this important issue:

“It is encouraging that we have seen many ordinary people across the world displaying great compassion toward the plight of refugees, from those who have rescued them from the sea to those who have taken them in and provided friendship and support. As a refugee myself, I feel a strong empathy for their situation, and when we see their anguish, we should do all we can to help them. I can also understand the fears of people in host countries, who may feel overwhelmed. The combination of circumstances draws attention to the vital importance of collective action toward restoring genuine peace to the lands these refugees are fleeing. Tibetan refugees have firsthand experience of living through such circumstances and, although we have not yet been able to return to our homeland, we are grateful for the humanitarian support we have received through the decades from friends, including the people of the United States.”

Again, in Palermo, Sicily, in September 2017, he declared that the way migrants and refugees had been accepted by European countries demonstrated compassion in action. “We should help them now in their desperation,” he clarified. “But, eventually they will want to return to their own lands. This is what we Tibetans have always had in mind. First of all, we must see peace and development restored in the countries refugees have fled, but in the long run, it is natural to want to live in the land where you were born.”

His Holiness regularly cautions against allowing the divisive idea of “us” and “them” to flourish. He suggests that a solution to many of the problems we face in the world today is to remind ourselves that as human beings we are all brothers and sisters belonging to one human family and that together we can take action to address the global challenges that confront us.