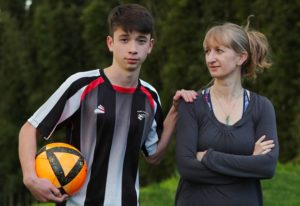 A New Zealand based newspaper-Nzherald published an article about a 14 -year Kiwi-born footballer’s visa battle with China over a game of football on 29 June in which it is reported that the 14-year-old Kiwi-born was selected to play in the prestigious Gothia Cup in China but missed out on the game simply because his father is a Tibetan.

Talented Northland teen Nyima Tsering-Young was picked to play in the upcoming tournament – widely referred to as the “Youth World Cup” – by a private football academy. However, the player was asked to withdraw because of the high possibility of getting his visa denied.

Nyima’s mum, Megan Tsering-Young believes that the academy had no choice given the time pressures but said she believed her son had been discriminated against by the Chinese Consulate issuing the visa because of his ethnicity.

“This sort of decision is about racism,” Tsering-Young said while also informing that the visas of other footballers were granted except Nyima’s.

Apparently, Nyima’s visa had to be sent to China and even then the success of him going to China is relatively low.

It is also reported that the mother of the boy Tsering Young, in fact, sent his visa early because of the past history her family had gone through regarding the same issue. They had faced delays and often declined visas in the past while trying to visit her husband’s family in Tibet.

The Absurdity of the whole situation deepened when the family received an update saying Nyima’s visa might be considered if he wrote a letter declaring he was only going to play football and ‘not conduct any other activities’.

“I didn’t think a New Zealand-born 14-year-old boy playing football would be a threat – what activities do they think he is going to take part in?” said the mother Tsering Young.

Despite that, Nyima was willing to write the letter. However, the football academy reluctantly withdrew Nyima from the team because of the uncertainty around his visa and they refused to comment anything lest it could jeopardize their team during the match.

Tsering Young and her Tibetan husband first met in India and had lived in New Zealand for more 20 years.

In the past, the couple faced similar visa issues but what happened regarding their son’s visa this time is something they said broke their heart.

“What weighs heaviest on my heart is that if a New Zealand-born boy playing football is discriminated against like this then what is daily life like for people in Tibet,” said Tsering-Young.

Tsering-Young stressed she had never had any issues with Chinese people – only the Chinese regime and claims that no one should be discriminated against for their ethnicity the way it has happened with her son.

Mr. T.G. Arya, Information Secretary of Department of Information and International Relations of Central Tibetan Administration said,  “This shows how scared and vulnerable China is about Tibet and the Tibetans. China is considered very powerful with its military and economic might, but the fact is they are scared of letting a 14-year old half-Tibetan boy from New Zealand play football in China. This also shows the Orwellian like surveillance operating in China.”

The Gothia Cup is an eight-day tournament to be held from August 12 in Chengyang district in Qingdao, China.

Since it started in 1975 more than a million players from 143 countries have participated in the tournament. In 2007, FIFA named it the “World Youth Cup”.