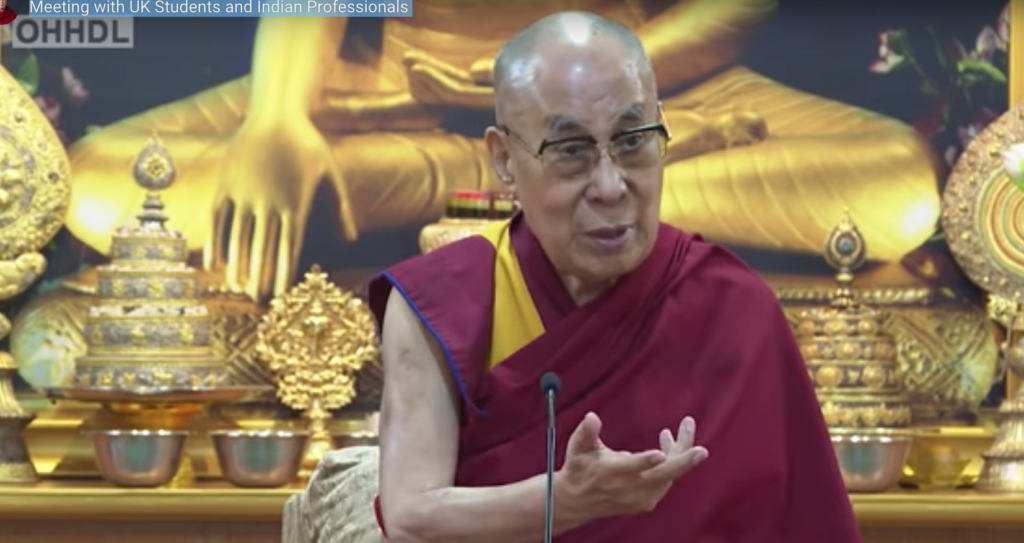 His Holiness the Dalai Lama speaking on the importance of inner values. Photo courtesy: Dalailama.com

Dharamshala: His Holiness the Dalai Lama met with the students from Kingswood School in Bath, United Kingdom and professionals from India at his residence in Dharamsala, HP on 10 July 2019.
During the hour-long session, His Holiness touched in a wide variety of meaningful topics that concern the well being of humanity.
His Holiness asserted that he doesn’t like the emphasis on formality that human has created which only creates barriers as His Holiness mentions that life and death don’t require formality as it comes and goes unannounced.
His Holiness accentuated that all human beings based on the very nature of life and death are the same be it physically, mentally and emotionally besides the scientists have claimed that basic human nature is more compassionate. Moreover, humans being social animals cannot survive independently as all are dependent on each other.
“As soon as we are born we receive the maximum mothers love and care,” said His Holiness the Dalai Lama.
His Holiness further noted that If we humans keep the sense of community, taking care of each other naturally all the sentient beings become much happier.
“A child is not bothered about religious faith, the nationality of other children. They represent the purest form of the oneness of humanity.”
However, as His Holiness mentioned they gradually join the education system and there they learn to put emphasis on different religious faith, nationality, caste, creed, and color.
His Holiness, therefore, affirmed that he has always been a little critical about the existing education system because it has neglected the basic human values.
His Holiness then acknowledged that India has over 3000 years old Sangya philosophy and this Sangya philosophy is further classified into two groups, one that believes God as the creator and the other that don’t believe in the concept of creator and creation. Then followed Jainism in India who does not believe in God as the creator although they do believe in divine beings. Similarly, Buddhism as His Holiness mentioned also do not believe in the concept of creator and creation. But what these two religious traditions believe and have in common is they accept and believe in the concept of self-creation.
Explaining the general concept of atman (independent self), His Holiness said that the body is separate from atman and the real owner of body and mind is this atman. This independent self has no beginning and end but only life after life in the circle.
“This is how the concept of self-creation has come about” informed His Holiness.
His Holiness mentioned that In Buddhism too, the concept of self-creation is similar but the only difference is there is no separation of self from the body.
According to Buddhism, the self is designated on the combination of physical and mental. His Holiness illuminated that in ancient times Buddhism, people used to refer to this as nihilism which means no independent self but self as merely designated.
His Holiness also necessitated the importance of training of the mind and emotion such as the principle of ahimsa (non-violence) and Karuna (infinity love) which His Holiness claimed already existed in India over 3000 years.
“ It is highly beneficial if you practice these inner qualities,” said His Holiness the Dalai Lama.
And In order to practice these inner qualities, His Holiness mentioned that it is essential to know the whole system of emotions and mind first.
In order to tackle the obstacles of mind, His Holiness recommended a single pointed meditation (samatha) and analytical meditation (vipassana).
His Holiness also defined that those religious traditions who believe in the concept of creator and creation usually put a high emphasis on prayers which are important but not as important as training the mind and emotion.
“The world today is also too much superficial oriented while neglecting the oneness of same human beings”
His Holiness views modern education to be partially responsible for the emphasis on superficial differences and materiality values which His Holiness said resulted in the creation of materialistic life and culture.
His Holiness notified that materialistic life only utilises the five senses of organs on the sensorial level and neglects the sixth mind (chith) which is experienced during sleep when the sensorial experience remains unconscious.
” Therefore it is important that we should think more about the nature of the main mind because the destructive emotions such as anger, attachment, fear, jealousy, etc are related to the main mind,” said His Holiness the Dalai Lama.
And in order to train the mind and emotion, His Holiness from time and again have necessitated it is important that modern education must inculcate the education on the training of mind and emotion from the kindergarten level.
His Holiness then answered questions from the audience after his talk.

His Holiness the Dalai Lama addressing the gathering of students from Kingswood School in Bath, United Kingdom and professionals from India at his residence in Dharamshala. Photo courtesy: Dalailama.com