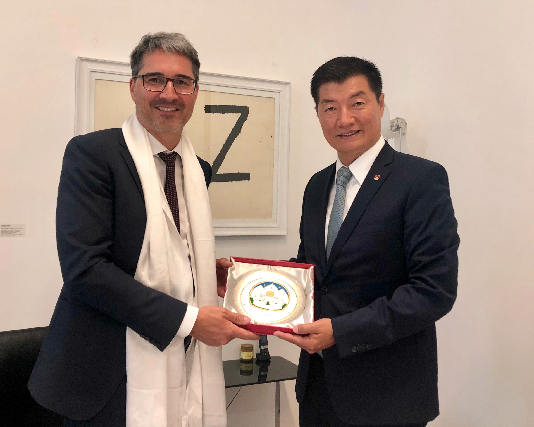 Arno Kompatscher, governor of South Tyrol in Italy, and Lobsang Sangay, President of the Central Tibetan Administration, pose for a photo in the former’s office in South Tyrol, 11 July 2019. Photo/Office of the Sikyong

BOLZANO: They both come from humble beginnings, went on to study law and lead a life of service to their people. The only difference is one leads a true regional autonomy while the other is in the pursuit of such.
Arno Kompatscher is the governor of South Tyrol, Italy’s nethermost region that has enjoyed an autonomous status since 1972. On the other hand, Dr. Lobsang Sangay, President of the Central Tibetan Administration is pursuing what is called the “Middle Way Approach” for Tibet, which seeks autonomy for Tibetans within the framework of the Chinese Constitution.
“South Tyrol’s success is a great example for the Chinese government to study in granting Tibetans a genuine autonomy,” President Sangay said.
At a time when many world leaders shy away from meeting the Tibetan leader, governor Kompatscher officially welcomed CTA President and assured his continued support for pursuing autonomy for Tibet.
On the world map, Tibet shows up as the “Tibet Autonomous Region,” however, Beijing holds a tight grip on the region in reality.
President Sangay also gave a public talk at the EURAC Research Center, a think tank that has worked in partnership with the CTA for the last 25 years. The audience heard about lessons the world can learn from the case of Tibet, especially Italy after recently having signed the Belt and Road Initiative with China.
EURAC has trained many of the researchers Tibet Policy Institute (CTA’s think tank), Task Force members, and senior CTA officials on the modalities of the functions of regional autonomy.
EURAC and CTA have now agreed to sign a Memorandum of Understanding in formalizing and continuing this important partnership.
The President also spoke to the researches at EURAC and discussed areas of studies that can help the Tibet issue, including environmental issues and continuing Tibetan students’ participation in the center’s summer and winter training programs. 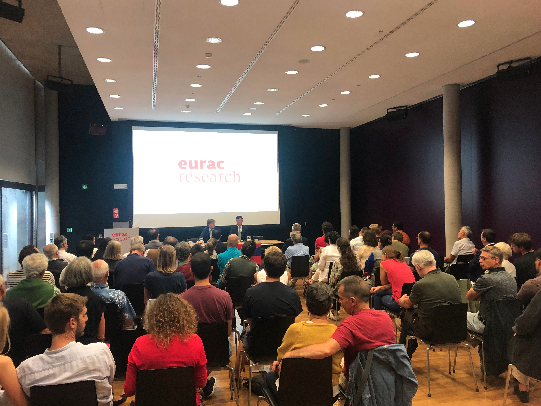 CTA President gives a public talk at the EURAC research center in South Tyrol, Italy. Photo/ Office of the Sikyong