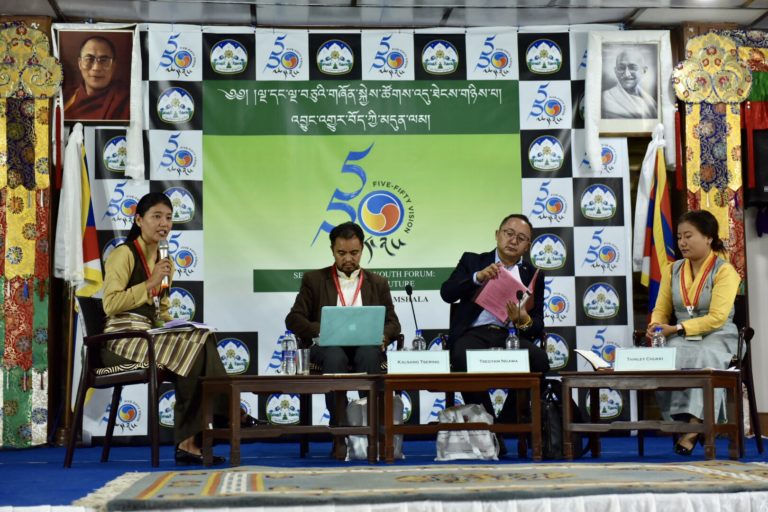 Dharamshala: Hundreds of Tibetan youth in diaspora gathered to discuss and voice their opinions to advance the cause of Tibet at one of CTA’s most celebrated forum, the Second Five-Fifty Youth Forum envisaged by President Dr Lobsang Sangay of Central Tibetan Administration.
The forum convened with the third plenary session at Hotel Devdar resort near Norbulingka Institute. It was presided by President Dr Lobsang Sangay, CTA’s Chief Resilience Officer Kaydor Aukatsang, Chief Planning Commission Kunchok Tsundue, and the secretaries of Department of Information and Internation Relations(DIIR).
The Second Five Fifty Youth Forum: Shaping Tibet’s future kicked off with a panel discussion on the first and foremost theme: Tibet and People’s Republic of China: Establishing Constructive engagement and negotiations. The panelists engaged in discussion about the relation between China and Tibet till date and its future prospects.
The First Panelist Thinlay Chukki staff at UN,EU and Human Rights Desk, DIIR CTA, elaborated on the relation of Tibet and China by speaking on the topic ‘Legal status of Tibet in the international law’. In her statement in proving that Tibet was never part of China, she reiterated, “On the eve of Chinese “act” against Tibet in 1949/50, Tibet fulfilled all the requirement of a “state” under the international law and therefore the act against Tibet was not an internal domestic matter of China. It was an act of aggression against another sovereign state, an illegal invasion violating international laws prevalent then including the UN Charter which is built on principle of “territorial integrity which China so blatantly violated then and now wants the world to respect. Tibet was historically an independent country and that is a fact and no amount of Chinese propaganda can change it.”
Kalsang Tsering, Task Force Secretariat, Kashag, CTA introduced the participants to the processes of dialogues between Chinese delegation and Tibetan delegation which first took place in the year 1979. He further spoke about the Tibetan delegation visitation program and the annual task force meeting. 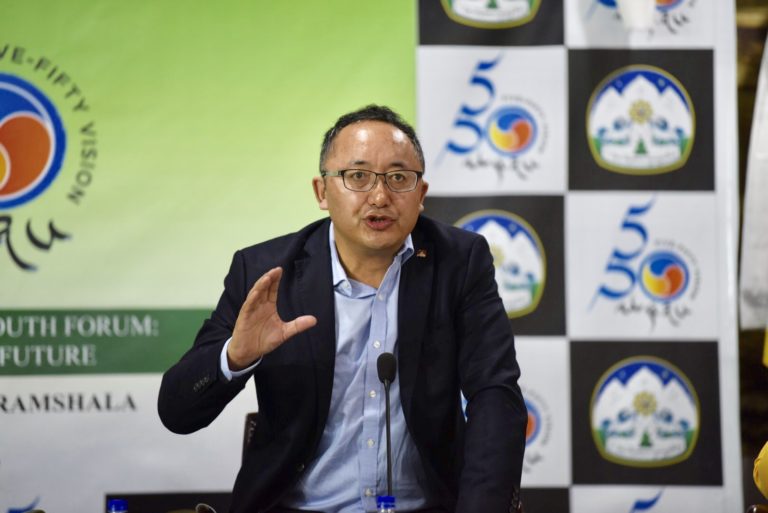 The Keynote speaker of the first Panel Ngawang Tsegyam, Secretary to Private Office of His Holiness the Dalai Lama highlighted the relationship between China and Tibet historically. He further spoke on the benefits and fruitfulness of the Middle Way Policy which the Chinese scholars, educators, lawyers and Human rights activists support.
He further solicited the support for dialogue between Tibet and China as shown by many high level dignitaries of China. He spoke of the importance of keeping relation with China in two ways: Relation with Chinese authority; and relation with the Chinese people.
The first panel discussion ended with Q/A session between the participants and the panelists. 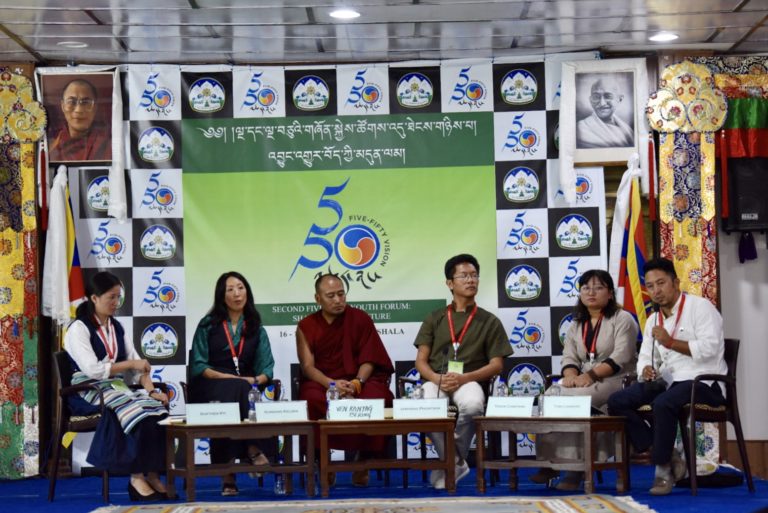 The second panelists deliberating on theme 2: Inclusion of and Responsiveness to Tibetans inside Tibet and Diaspora. Photo/Tenzin Phende/CTA

The second Panel Discussion was on the theme: ‘Inclusion of and responsiveness to Tibetans inside Tibet and Diaspora’. Panelist  Tashi Lamsang, Former General Secretary of Tibetan Youth Congress spoke about the history of Tibet including the military power of Tibet in the early times and the subsequent influence that China has brought out on the language and culture of Tibet.  Second Panelist Tenzin Choeyang, Research and Media officer, Tibetan Women’s association spoke about the Tibetan Women’s role in inclusion of and responsiveness to Tibetans inside Tibet and Diaspora. She narrated case studies of many Tibetan women who were a huge part in the freedom struggle back in Tibet and in the diaspora. Third Panelist Jamyang Phuntsok shared his experiences and suggestions regarding the theme.

The keynote speaker of the Panel Ven. Kanyag Tsering informed about the critical human right situation in Tibet and shared various information related with the same. The panel discussion once again ended with questions and doubts raised by the participants and clarification and answers provided by the panellists. 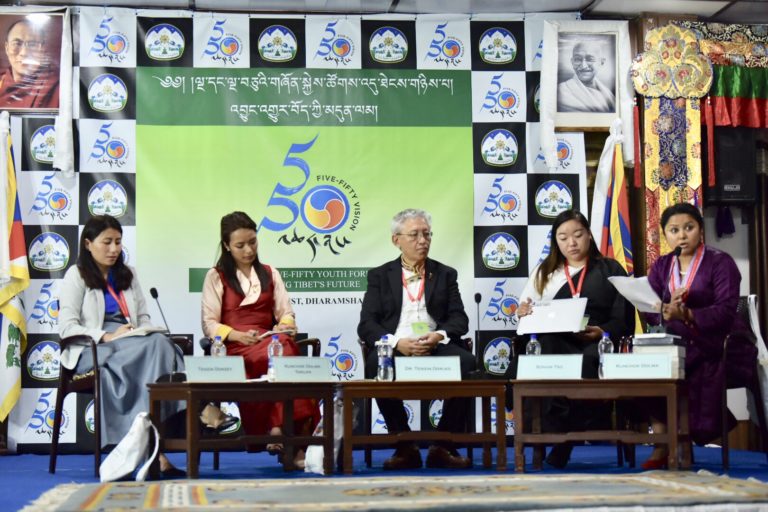 The third panel discussed on the theme: ‘Young voices in the Tibetan Freedom Movement: communications, Advocacy and international Relations’. The Panelists were Kunchok Dolma, New York Emmy Award Winner, Sonam Tso, Campaigns and communication Director students for free tibet, Kunchok Dolma Yaklha, Former Special Appointee for Human Rights, Office of Tibet, Geneva and Dr. Tenzin Dorjee, Commissioner, US Commission on International Religious Freedom, Associate Professor, California State University. All panelists spoke their pieces on the theme.
Kunchok Dolma Yaklha spoke about Tibet advocacy in the UN and shared her experiences regarding how China blatantly cut out the voices raised against them. She shared the incidents where Chinese delegation interrupted her speaking on Tibet issues at various platforms.
She further notified the participants about the role of Central Tibetan Administration(CTA) and the status it holds. She called CTA the pivotal and the head for the Tibetan movement since the institution is the continuation of government back in Tibet. Finally she advised the Tibetan youth to preserve the identity and dignity and carry the movement forward.
Dr. Tenzin Dorjee talked about the importance of communication and keeping a good relation. He spoke broadly on the advocacy and International Relation. He said since the world is globalised, so one must need to be interdependent as specified in the text of Buddhism thus he advised to connect globally and advocate the freedom struggle. He further highlighted the importance of transparency, integrity and preservation of identity and urged the youth to work for Tibetan struggle especially because they are now in a free country.
The fourth and the final panel discussion was held on the theme: ‘CTA’s Leadership Towards the Five-Fifty Vision- Creating Visionary Leadership, and Resource Mobilization’. The panelists were Phurbu Thinley, Principal, SOS Hermann Gmeiner School Pokhara, Shenphen Ringapontsang, Founder AMA- Australia, Yeshi Dawa, PhD Candidate, Amity University- Noida, Kelsang Dolma, Special Assistant, Office of Tibet, Washington D.C, Kalden Choephel, Founder Director, Exile Creations, Pema Gyalpo, Founder, Oshi Shenphen Tsokchung and Nyima Gyaltsen, Winner of TED Investment Award- 2017.
All the aforementioned panelists spoke on their individual experiences with regard to creating visionary leadership and resource mobilisation. The participants enthusiastically participated in all the plenary sessions and expressed satisfaction and understanding of all the information provided by the respective panelists of different themes. The hall was filled with shared knowledge and interaction among the participants about all the themes covered today.
-By Tenzin Seldon 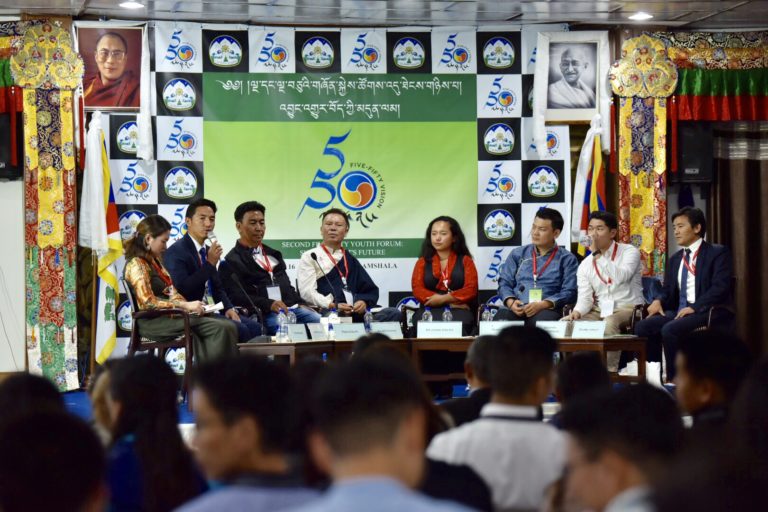