A Monk on a Mission: Urging “Dialogue For Peace” tour final leg in Switzerland 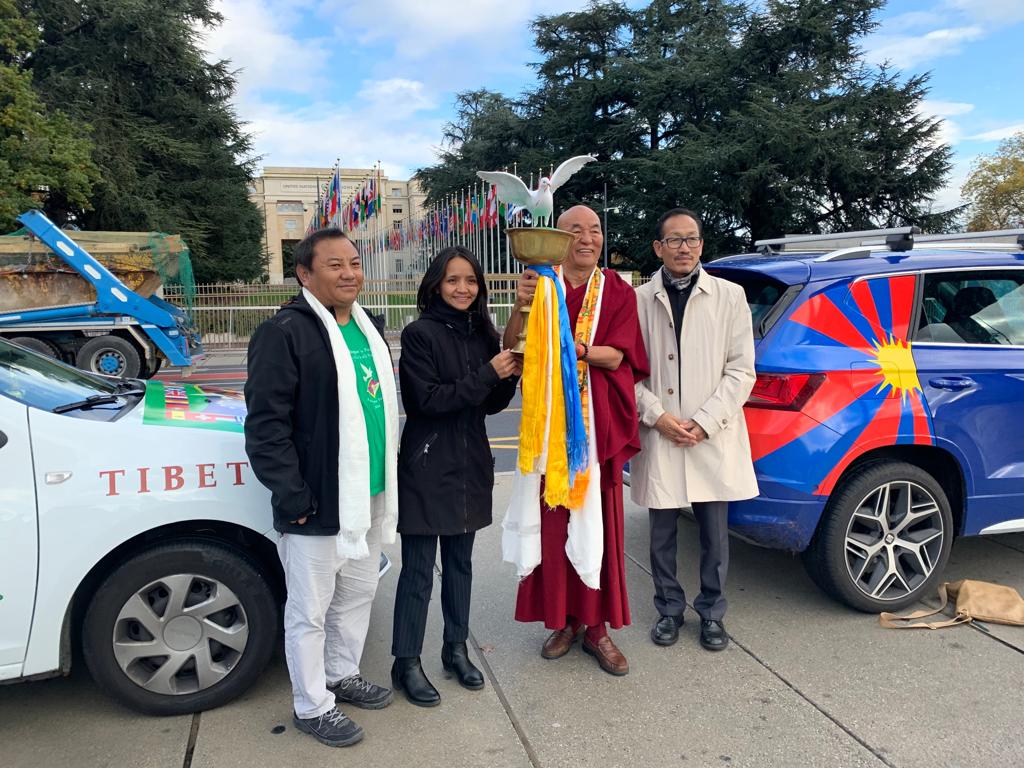 Member of Tibetan Parliament in Exile Venerable Thupten Wangchen with the Representative Chhimey Rigzen and Staffs of the Tibet Bureau in Geneva.

Geneva: On his final leg, Ven. Thupten Wangchen, Member of Tibetan Parliament in Exile, with his two Spanish friends Javier Nogue Begue and Pau Nubiola Muck reached Geneva on 6 November, in a white car covered with stickers of Tibetan National Flag and campaign slogan “Dialogue for Peace”.
MP Wangchen’s Dialogue for Peace campaign focusses on urging the EU, politicians and Tibet support groups across Europe to appeal for dialogue between the representatives of His Holiness the Dalai Lama and the Chinese government.
Switzerland is the final leg of the campaign’s 30 European-countries tour. The Dialogue team was given a rousing welcome on arrival in Zurich, Rikon, Bern and Geneva.
Ven Wangchen accompanied by Representative Chhimey Rigzen, MP Jampa Tsering Samdho representatives from Tibet Bureau and leaders of Tibetan Community in Switzerland and Liechtenstein held a series of meetings including meeting with representatives of the Office of the High Commissioner for Human Rights and the US mission to the United Nations while in Geneva. Meetings with the members of the Swiss Parliamentarian group were held in Zurich and Bern.
With the dove perched above a votive butter lamp and a dedicated mission advocating for the earnest resumption of Sino-Tibet dialogue, the campaign tour began from Barcelona, Spain on September 2nd and continued across Europe.
In the span of two months and a week, Ven Thupten Wangchen travelled 19,500 kilometres across 30 European countries. He met with Members of Parliament, mayors, diplomats, Tibet Support Groups, Media, University students and delivered letters of peace to respective Chinese embassies in each of the 30 countries.
On his Austrian tour, Ven Thupten Wangchen met with Dr Ewa Dziedzic of the Green Alternative Party in Vienna and a member of Federal Council of Austria as well as the head of the Human Rights Desk of the Austrian Foreign Ministry.
In Czech Republic, the peace tour met with the parliamentarians of the Czech Senate along with Mr Martin Bursik, Czech politician and former president of Czech Green Party, in the presence of CTA President Dr Lobsang Sangay at the 23rd Forum 2000 Conference held on 14 October 2019.
While in Rome, Italy, Ven. Wangchen met the president of Italian Chamber of Deputies and Senators Roberto Rampi and Lilian Segre and other members of the Italian parliament, as well as Senator Mihai Gotiu of Romania.
In Slovenia, the peace tour met with members of the Slovenian Parliament, followed by a lecture program at Maribor University.
In Berlin, the peace tour met with German Senator Ms Schaefer, followed by a visit to the Taiwanese Ambassador to Berlin, Dr Jhy-Wey Shieh, who expressed mutual understanding between Tibet and Taiwan, as well as a shared vision and support for future dialogue between Tibet and China. Ven. Thupten Wangchen also participated in a discussion on Tibet and Hong Kong with Berlin-based human rights activists, and students from Hong Kong.
When asked about the reason for choosing “30 European countries” for the peace tour campaign, Ven. Wangchen said, “this year marks the 30th anniversary of the conferment of the Nobel Peace Prize on His Holiness the XIV Dalai Lama, and also the 30th birth anniversary of Tibet’s missing XI Panchen Gedhun Choekyi Nyima”. Hence, 30 denote the marking of “these two important anniversaries”.
Upholding the 60 years of Tibetan commitment towards peace, justice and non-violence, the peace tour emphasis the Middle Way Approach, which seeks genuine autonomy for the Tibetan within the Constitution of the People’s Republic of China, and urged the Europe Union, diplomats, Member of Parliaments among others to encourage China in breaking the stalemate of dialogue between the representatives of His Holiness the Dalai Lama and the People’s Republic of China. The last round of dialogue took place in January 2010.
The symbolic conclusion of the “Dialogue for Peace” tour was set in Geneva, Switzerland. Geneva as the headquarters of the United Nations’ Human Rights Offices is known as the global hub for diplomacy.
-Filed by Tibet Bureau in Geneva 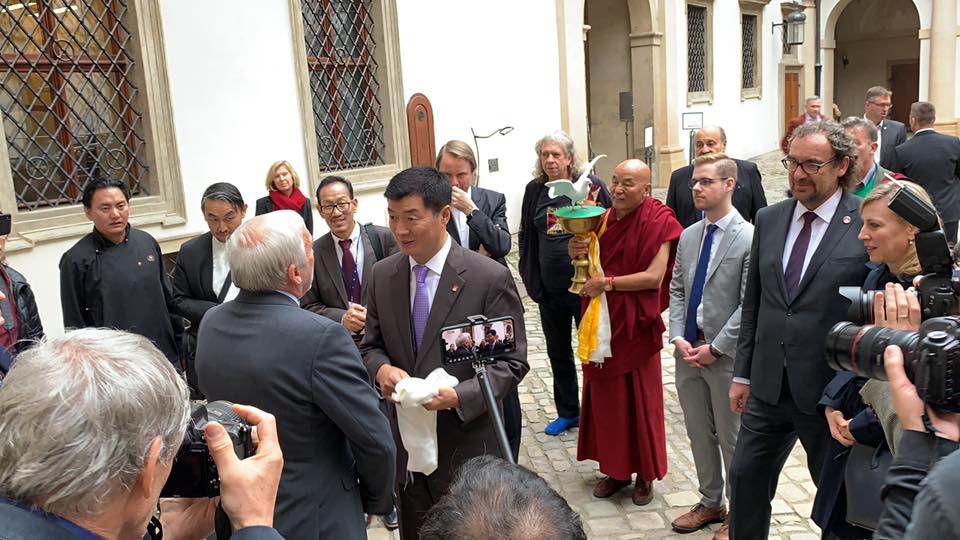 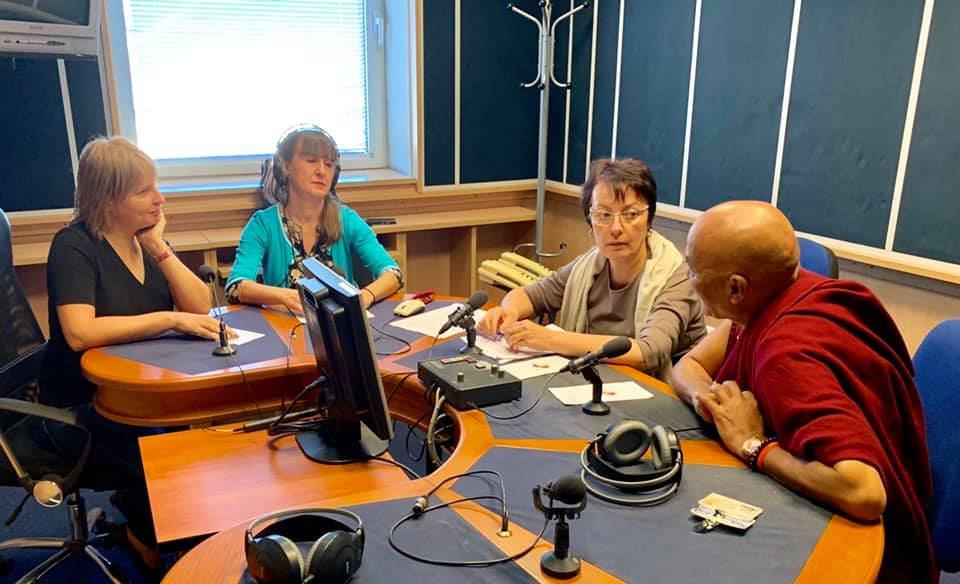 Ven. Thupten Wangchen in an interview series with the Bulgarian National Radio in Sofia, Bulgaria. 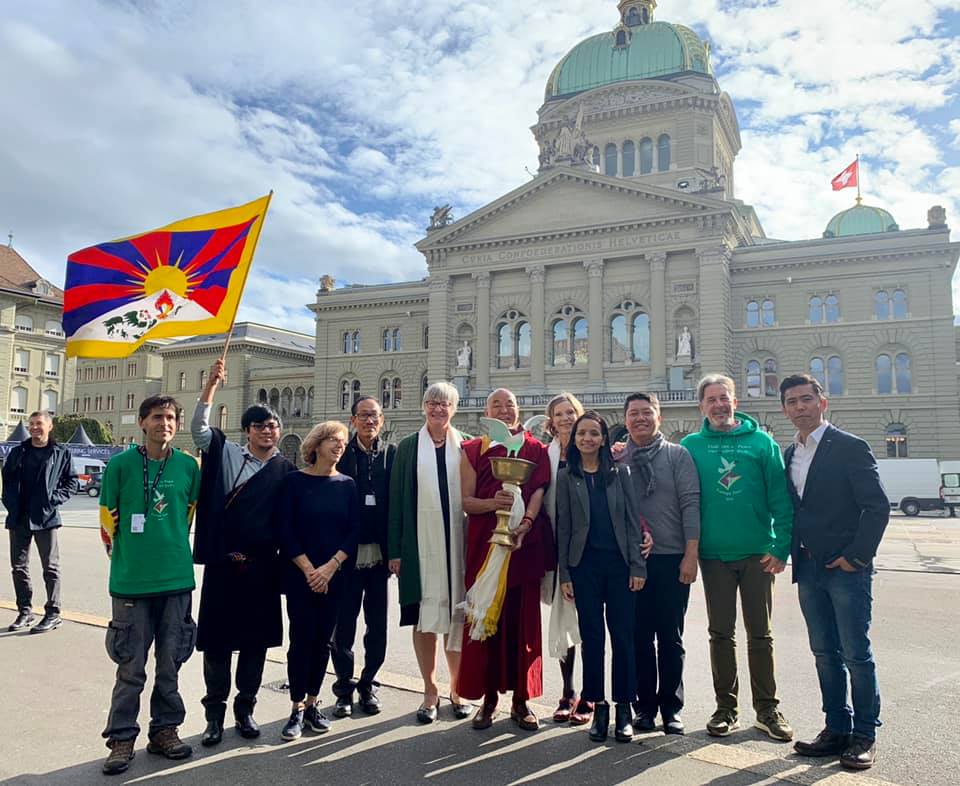 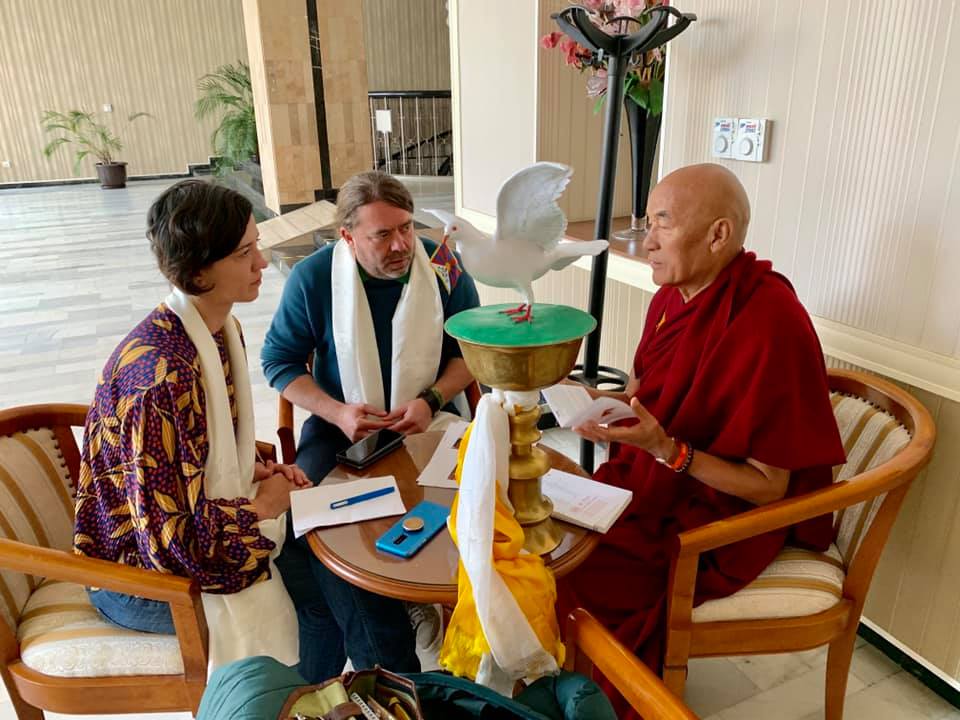 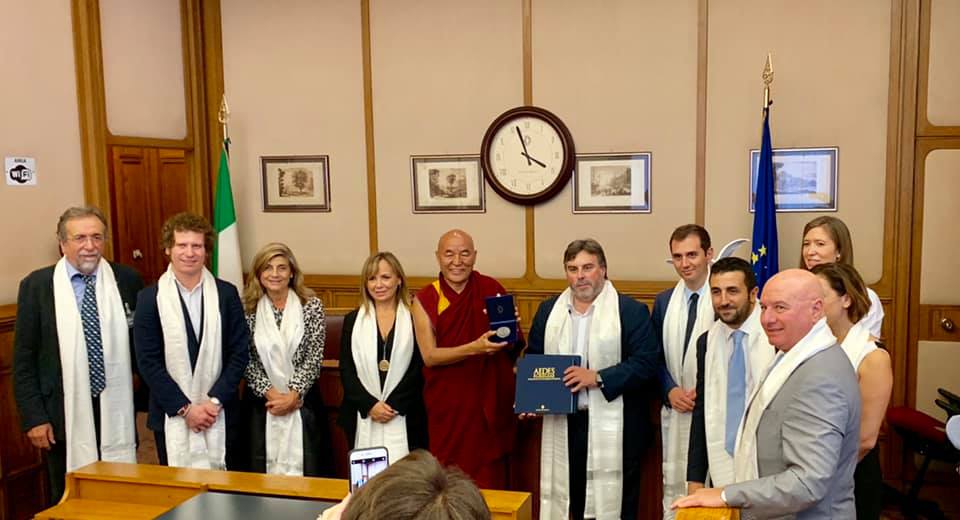 Ven. Thupten Wangchen with Senators Roberto Rampi and Lilian Segre and other members of the Italian parliament in Rome. 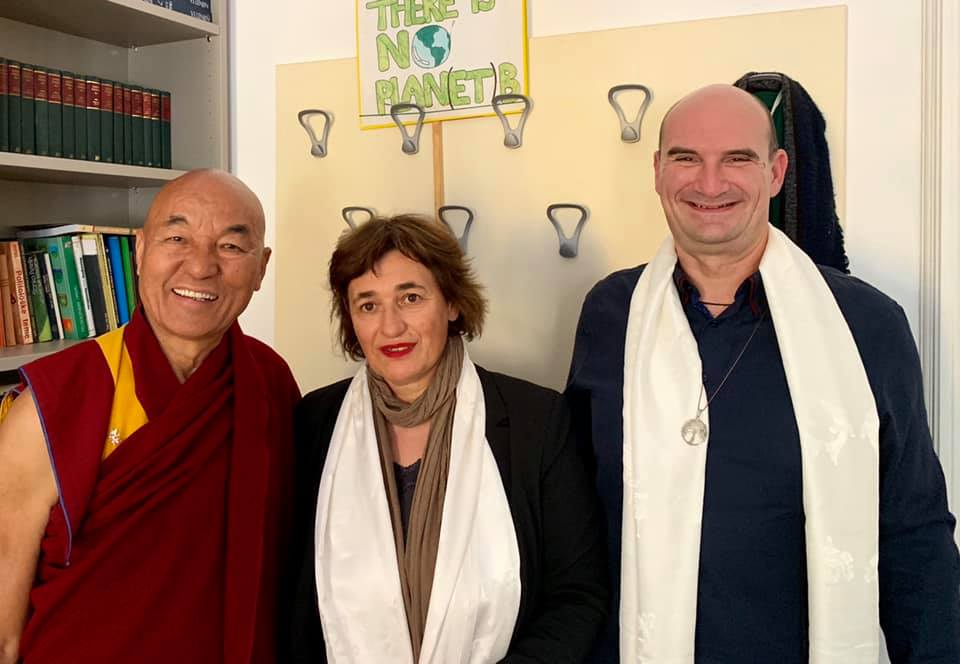 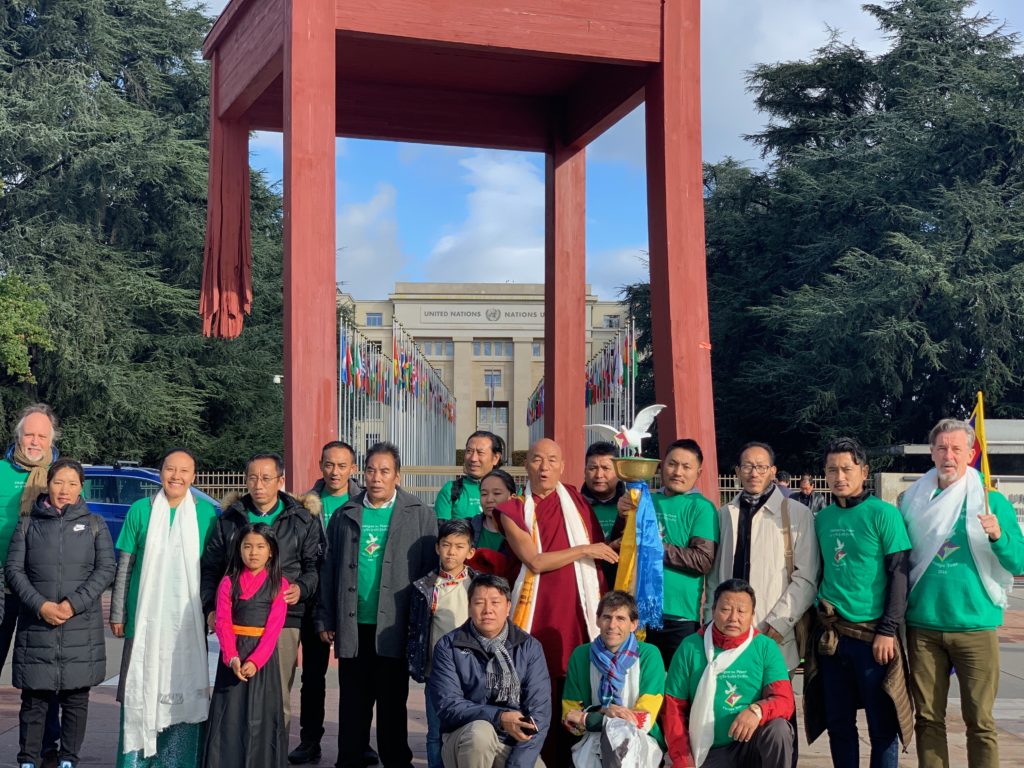 Ven.Thupten Wangchen with MP Jampa Samdho, Representative Chhimey Rigzen and members of Tibetan community in Geneva in front of UN in Geneva. 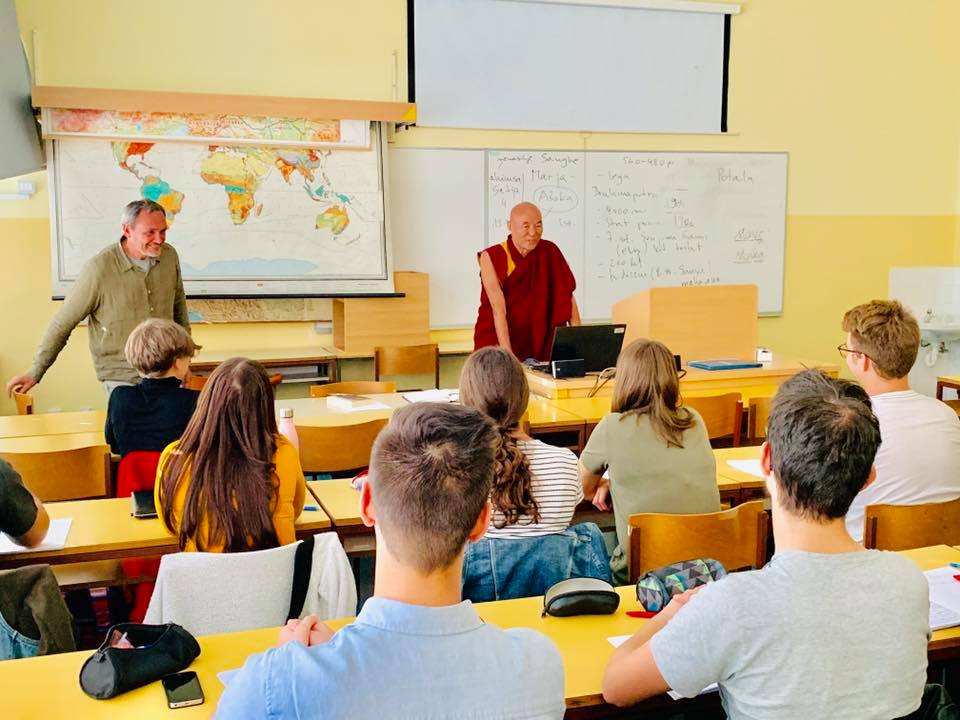