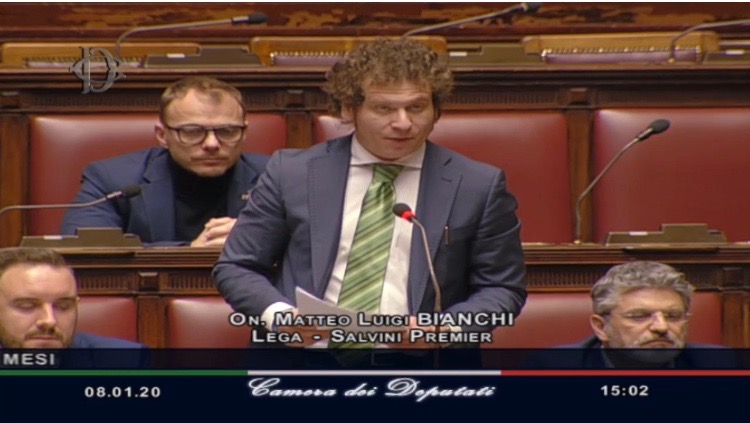 Hon Matteo Luigi Bianchi, member of the Italian Parliament voiced concern over Chinese repression and continued crackdown on the fundamental rights of Tibetans and Hongkongers in his speech at the Parliamentary session currently underway.

Italy: Honourable Matteo Lungi Bianchi, member of Italian Parliament voiced concern over Chinese repression and continued crackdown on the fundamental rights of Tibetans and Hongkongers in his speech during the Italian Parliamentary session currently underway.

Elucidating the case of Tibet, Mr Matteo Lungi highlighted that “the one-party communist People’s Republic of China is not new to repressing freedom towards peoples.” He further narrated the destruction brought on to Tibet with a road to Lhasa, “in 1950, they promised a link road to Lhasa, which was supposed to bring peace and prosperity to the Tibetans. In fact, the road was built, but with it came tanks, rifles and soldiers that occupied the entire territory”.

The brutal crackdown on Tibetan uprising in March 1959 has forced the XIV Dalai Lama and thousands of Tibetans to flee into exile in India, where the Dalai Lama continues to reside, explained On Matteo Lungo Bianchi in the parliament.

While questioning the Italian government’s attention and position concerning the dismal human rights situation in Tibet and Hong Kong, Mr Matteo Lungi questioned the government asking “Are these situations tolerable” […] “Can we pretend not to see what is happening in Tibet, Hong Kong and other contexts where Beijing repression over people’s fundamental rights are not acceptable”?

Mr Matteo Lungi called upon the Italian government to take “clear position” especially in engaging with “strategic” and “commercial partner” like China, providing the significant role of G7 countries like Italy.  “We believe agreements of any kind are important, but we cannot tolerate violent repressions by our partner”, added On Matteo. He further called upon the member of the Italian government to “take clear position” in asserting “national interest”.

Previous Post A Monk on a Mission: Urging “Dialogue For Peace” tour final leg in Switzerland Next Post Tibetans will not accept China-appointed Dalai Lama: His Holiness the Dalai Lama