Tibet at the United Nations in 2019: A Year in Review 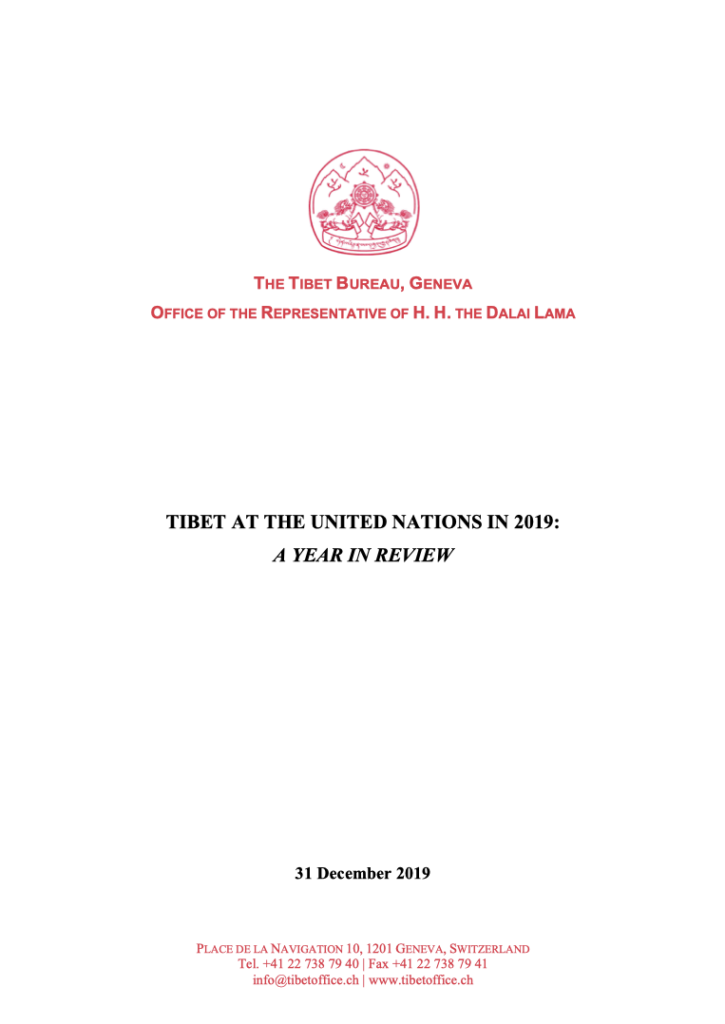 The Tibet Bureau Geneva releases ‘Tibet at the United Nations in 2019: A Year in Review’.

Geneva: The year 2019 marked the 60th anniversary of Tibetan National Uprising Day, a day when hundreds and thousands of Tibetan men and women, young and old stood up against the illegal occupation of Tibet by the People’s Republic of China. The People’s Liberation Army of China brutally crushed the peaceful uprising but failed to conquer the spirit of Tibetans.

Tibetans have survived and prospered in the most trying circumstances. They continue to advocate for the just cause of Tibet and raise voice against the human rights violations in Tibet. This quest for justice, peace and freedom by Tibetans has received international support and many countries continue to raise their concerns on the violations against Tibetans in Tibet by China.

Despite China’s growing influence in the UN, many countries continued to question China on its deplorable human rights track record at the UN. Many countries expressed grave concerns about the human rights violations in Tibet and other territories under the Chinese rule like East Turkestan (Ch: Xinjiang) and Souther Mongolia (Ch: Inner Mongolia). They called for protection of human rights defenders including Tashi Wangchuk.

The year also saw joint communications from UN Special Procedures calling on China to respect the human rights and cultural rights of Tibetans in Tibet. The experts also questioned China on the “misuse of Chinese criminal law on “incitement to separatism” with an objective to suppress freedom of expression, religion, assembly and association and the cultural rights of the Tibetan minority as well as to quash any human rights advocacy with regard to the protection and promotion of these rights.”

As noted by Representative Chhimey Rigzen in the foreword of the report, “the report highlights the common message of ‘hope and never give up’ adopted by Tibetans in the struggle for freedom.” Appealing for support he further stated, “we have come a long way and there is much more ground left to cover. We convey our sincere gratitude to all our supporters for their consistent support in our struggle and appeal them to continue to do so until we reach our goal.”

A copy of the full report is available here.

Previous Post Tibetans will not accept China-appointed Dalai Lama: His Holiness the Dalai Lama Next Post Statement of Tibetan Parliament-in-Exile on 61st Commemoration of the Tibetan National Uprising Day