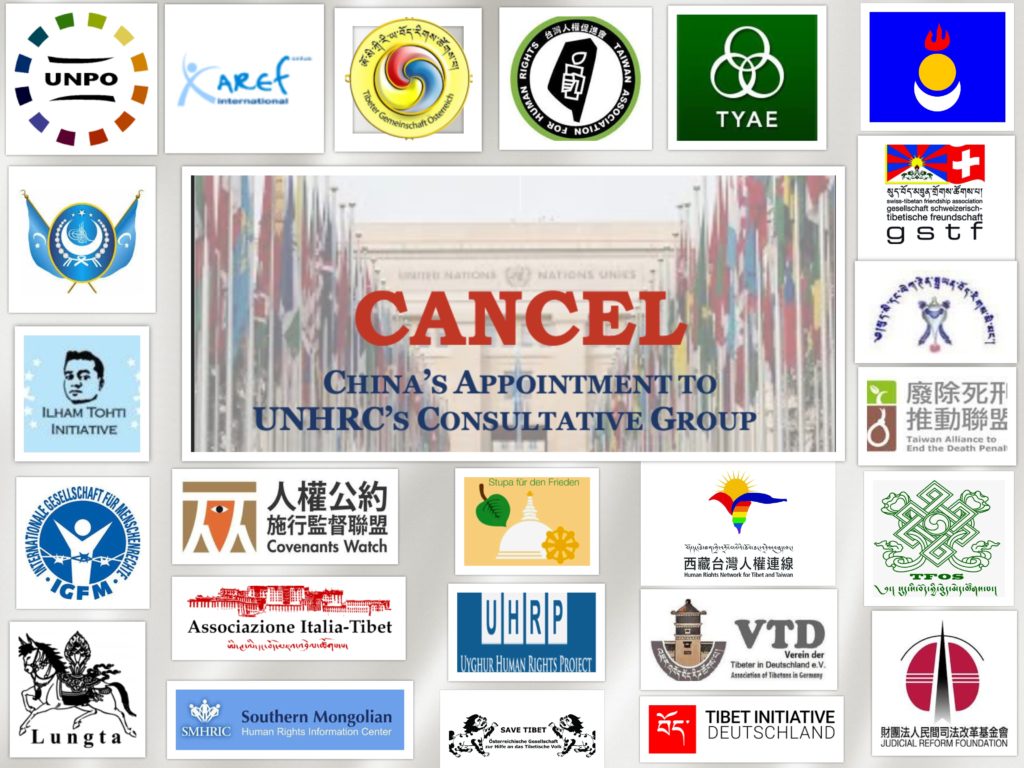 The image used is for representation purpose only and features only a few of the 82 organizations who supported the petition.

Geneva: 82 Organizations and Associations predominantly from Central and Eastern Europe have submitted a joint petition for the cancellation of appointment of Mr Jiang Duan, Minister at the Permanent Mission of the People’s Republic of China, to the Human Rights Council’s Consultative Group from 1 April 2020 to 31 March 2021.

The joint petition was submitted to UN General Secretary Mr Antonio Guterres, Chair of the General Assembly’s Third Committee Mr Christian Braun, President of the United Nations Human Rights Council (UNHRC) Ms Elisabeth Tichy- Fisslberger, the UN High Commissioner for Human Rights Ms Michelle Bachelet and each of the 55 member states of the Asia-Pacific regional group which nominated China to the consultative group of the UNHRC. The petition called for the cancellation of appointment of China respectively.

The consultative group consists of five members each nominated by five different regional groups: African Group, Asia-Pacific Group, Eastern European Group, Latin American and Caribbean Group and Western European and Others Group. The consultative group plays a critical role in the appointments of independent human rights experts under the special procedure of the UNHRC. The petition stated that “with this appointment, China will be able to weaken the 17 Special Procedures which are due for fresh appointments eventually subverting the entire system of special procedures. We cannot let a fox guard the henhouse.”

The petition also highlighted China’s role in suppression of the COVID-19 whistleblowers and the misinformation to the WHO which has currently plunged the world into unprecedented chaos and deaths. The petition also noted that China’s appointment to the influential group sends a discouraging message to all the Tibetans who have been raising their voices against the oppressive Chinese regime in their more than six decades of struggle and who continue to pin their hopes on the UN. “It also dampens the spirit of the Chinese Human rights Defenders, the Uyghurs, Southern-Mongolians and the Hong-Kong pro-democracy advocates who are putting their lives at risk for basic rights of their people against the self-serving interests of Chinese Communist Party Government,” added the petition.

Speaking of the petition Representative Chhimey Rigzen of Tibet Bureau Geneva said, “We have forwarded the petition to all the relevant offices of the United Nations and the Permanent Missions of the Member States. This is a commendable work of the organizations and associations which continue to believe in the universality of human rights. More such actions need to be taken to make the international human rights system and the United Nations accountable to the international community and to restore the faith of people on these international organizations. Human rights are for all and we cannot allow a country like China, one of the worst human rights abusers in the world, to change the basic tenets of it.”