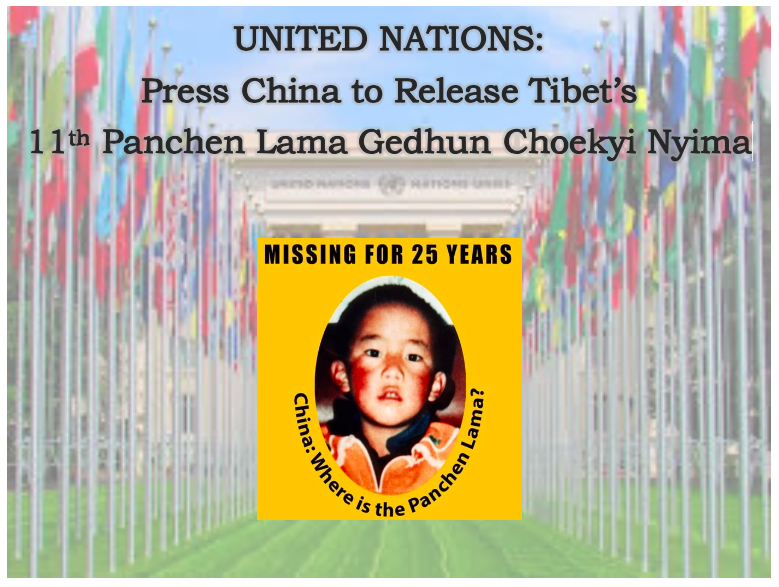 The enforced disappearance case of Panchen Lama Gedhun Choekyi Nyima is currently pending at the Committee on the Rights of the Child and the UN Special Procedure- Working Group on Enforced or Involuntary Disappearance. The joint petition is addressed to UN General Secretary Mr Antonio Guterres, Chair of the General Assembly’s Third Committee Mr Christian Braun, President of the United Nations Human Rights Council (UNHRC) Ms Elisabeth Tichy- Fisslberger and the UN High Commissioner for Human Rights Ms Michelle Bachelet. The joint petition was further forwarded to 12 UN Special Procedure Mandate-Holders, four UN treaty bodies, WHO and 192 Permanent Missions of the UN Member States by the Tibet Bureau Geneva requesting for their support and necessary actions for the release of Panchen Lama Gedhun Choekyi Nyima and his entire family.

The petition highlights China’s egregious human rights violations against Tibetans and the people living under its regime which has led to the spread of COVID-19 pandemic plunging the world in an unprecedented loss of lives, crippling the global economy. “We cannot allow China to continue on this path of global destruction with the ‘Chinese model of deceit and oppression.’”

“The communist China is destroying the foundations of Tibetan Buddhism. It is interfering in the sacred Buddhist traditions of Tibetans with unjust laws like Order no. 5 through which ‘atheist’ Chinese government is meddling in the recognition of reincarnated lamas,” notes the petition. It further adds, “the 25 years of enforced disappearance of Gedhun Choekyi Nyima and his family members is a continuous crime not just against him, his family and the Tibetan people but also against every individual who believes in the sanctity of human rights. This is a crime against humanity and China must be held accountable for this heinous act.”

The joint-petition urged the UN to:

The joint-petition can be found here.