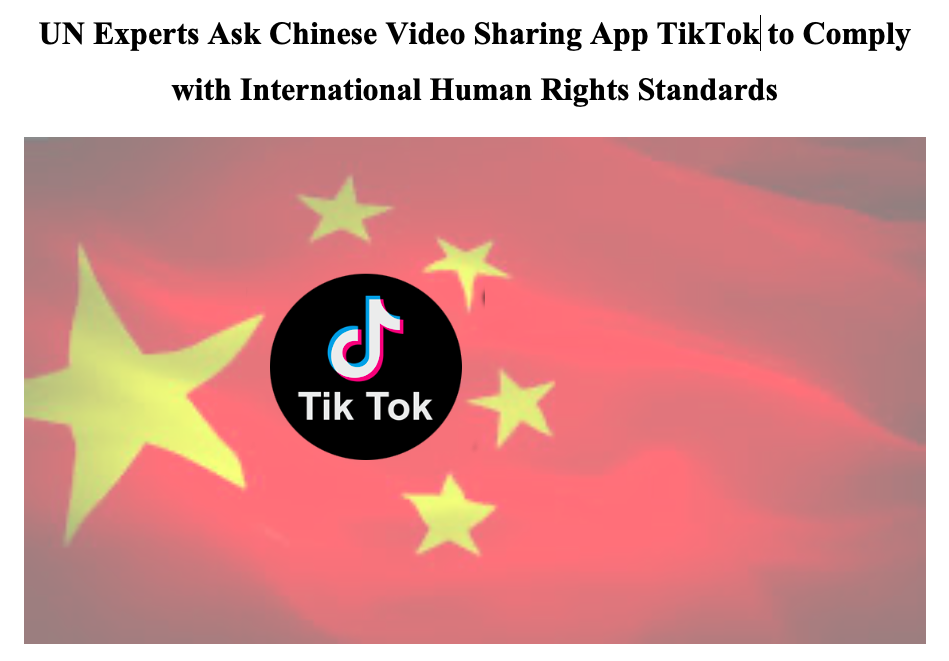 In a 10-page letter dated 15 May 2020, addressed to Mr. Zhang Yiming, Founder and Owner of Chinese video-sharing app Tik Tok, the UN human rights experts have asked TikTok to adhere with international human rights standards while undertaking the task of content moderation.
The Chinese video sharing platform gained notoriety in the backdrop of it banning a US teen from posting videos criticizing China’s treatment of Uighur Muslims. After the global outcry, TikTok was forced to apologize and reinstate the US teen’s videos and account. A leaked internal document of TikTok revealed how TikTok ordered its moderators to censor videos that mention Tiananmen Square, Tibetan issue, or the banned religious group Falun Gong.
According to a report by the Australian Strategic Policy Institute, ByteDance the parent company of TikTok plays an active role in disseminating the Chinese Communist Government’s propaganda. The Chinese state control over this widely used app has triggered various privacy and security concerns. The US government agencies including the Navy, Army, Marine Corps, Air Force, Coast Guard, and the Transportation Security Administration banned the short-form video app TikTok over security concerns. And in India netizens are calling for a ban on TikTok.
The UN experts impressed upon the TikTok to ensure that rules on content restrictions must be precise. They quoted the 2018 report by David Kaye, Special Rapporteur on the Promotion and Protection of the Right to Freedom of Opinion and Expression, which states “the vagueness of hate speech and harassment policies has triggered complaints of inconsistent policy enforcement that penalizes minorities while reinforcing the status of dominant or powerful groups.” They further urged the company to clearly articulate its commitment to respect human rights in their terms of service and community standards. The Experts further urged TikTok to ensure “fundamental commitment to non-discrimination.”
Conceding that companies have to comply with the local laws where they conduct business, the experts, however, emphasized that “companies responding to government removal requests must also keep in mind that any restrictions on the right to freedom of expression must be exceptional and that States bear the burden of demonstrating the consistency of such restrictions with the human rights principles.”
Calling the TikTok’s guidelines on Transparency vague, the experts stressed that human rights responsibilities require a more holistic approach to transparency. The experts asked the company to adhere to human rights standards which would provide “a framework for TikTok to avoid blatant human rights violations.”
The letter of communication was issued by the mandate holders: David Kaye, Special Rapporteur on the Promotion and Protection of the Right to Freedom of Opinion and Expression and Githu Muigai, Chair-Rapporteur of the Working Group on the Issue of Human Rights and Transnational Corporations and Other Business Enterprises.
To read the entire letter please click here.