Not prayers, we need collective compassion to fight Coronavirus 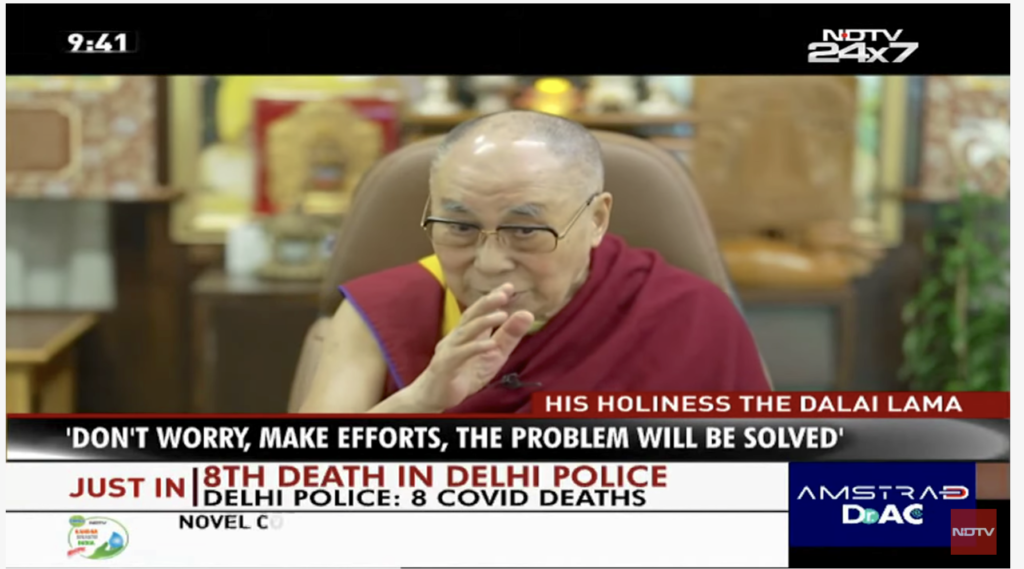 Dharamshala: In a wide-ranging interview with NDTV’s Prannoy Roy, on Friday evening, His Holiness the Dalai Lama talks about coronavirus as a collective negative action (karma) and building immunity against coronavirus through compassionate actions as antidotes while also taking physical care.

His Holiness also speaks extensively about the special relevance of ancient Indian tradition in promoting human well-being and his commitment to revive the system in India through the Tibetan Buddhist tradition which he calls the principal repository of the Nalanda tradition.

“I think mainly peace of mind. As I already discussed when problems start, don’t think much, worry not, don’t be anxious. That is the main factor. And then that also affects the physical condition.”

His Holiness agrees with the interviewer when asked if the coronavirus among others is collective karma that has been negative but adds that the karma is mainly actions and therefore can be altered with effort.

“Since karma is our own creation, so ultimately, we have the ability or opportunity to change karma. For example, some negative karma due to anger or due to violence. Then try to increase compassion, forgiveness and also practice as much as you can.”

“It is important that we should be a more compassionate human being. And you shouldn’t pay much attention, my land, their land, my economy their economy. That is the old thinking. Now we should think we, we, we – 7 billion human being”.

His Holiness views on the state of the world today weave into a larger narrative—the coronavirus outbreak has shown how interdependent our world is, no boundary or walls we built can avert a human crisis.

The pandemic, after all, could be an opportunity to transform our lives for the better.

To recognize the unlimited potentials of our own minds, and realizing that no amount of physical developments can give the solution to every human problem.

Both physical and inner development must go together for human flourishing on this planet—a message His Holiness has repeated all his life.

Excerpts of His Holiness’ interview as published by NDTV:

My brain and every part of my brain is filled by Indian thought. Buddhist thought, that is Indian, Indian tradition. Then this physical survived, I think over more than 50 years, this body survived with India’s daal and India’s rice. So, therefore, mentally, physically, from both view point, I am a son of India. I really feel proud.

And the roots of your Indianness goes way back in history and tradition, right?
You see 8th century, Tibetan emperor invited one Nalanda scholar, Santaraksita, in the 8th century. He was a great scholar. His writing we still use and study. He was a great logician and Madhyamaka philosopher. Very sophisticated philosophy and he (was a) great logician. So, Nalanda tradition, even Buddha himself stated ‘Oh my follower, you should not accept my teaching out of faith but rather thorough investigation and analysis. So, Buddha, as one great master of India, he utilized thousand years old India’s tradition, a logical approach. So that 8th century Nalanda master, Santaraksita, he invited my Tibetan emperor. And he introduced Buddhism according to Nalanda tradition. So, we extensively use logic. So as a student of logic, even Buddha’s own word – never say yes, yes. But always raise question why? What’s the reason? So, it is very, very useful, very useful.

Tell me in karma, this year 2020 there’s been earthquake, there is virus, there have been so many things. Is it collective karma that has been negative?
Oh yes. Group of people, some negative karma. Then also you see effect of their life or event. But since karma is our own creation, so ultimately, we have the ability or opportunity to change karma. I think some lazy people, without much effort, they just say karma, karma, karma. Some lazy people.

One thing you have always said that women leaders, female leaders are better. In fact, in this pandemic the leaders that have handled it best are women leaders?
Look history. All heroes. Hero means killing other, killing more people. So, most heroes are male. Now according to some scientists, the females have physical conditions that make them show nature more love and kindness to others. Firstly, our mother female. In my own case, my father was very short tempered. On a few occasions, I got some punishment. He was fond of pork, my father. While he enjoyed pork and some oil he used to put on his moustache. Sometimes I sit beside him hoping for some piece of pork. Then sometimes I pull his moustache and then he sometimes (mimics slapping and laughs). But my mother never showed angry face. I usually describe my mother is my first guru about karuna (compassion).

How do you build your fitness and immunity levels? I think mainly peace of mind. As I already discussed when problems start, don’t think much, worry not, don’t be anxious. That I think is the main factor. And then that also affects physical condition. I practice some yoga. That also, I think, help.

You have always been involved with science. Is it possible to combine spirituality with science? Since my childhood, very young age, I had some interest. Whenever I get some toy, some movement, I always used to open it (to see) how it worked. Then the 13th Dalai Lama kept one movie projector. It produced some light. So I opened that (to see) how light (is) produced by a small dynamic move. So, I have some interest from childhood.

How does the brain of a scientist meet and interact with the mind of a spiritual person?
Modern science is mainly a material thing. Modern science, till late 20th century, the scientists had no idea about mind, about chitt. Only brain. Later part of 20th century, some scientists study and experiment. Some individual practitioner, who can meditate few hours. So, during (while) these people meditate and they check about brain. So eventually, these scientists now accept, besides this brain – whether you call chitt or mind – there is something meditating that effect our brain.

In this current situation, caused by this virus, a lot of people are going to lose a friend or even, God forbid, a family member. And there’s going to be a lot of sorrow. Have you ever faced sorrow in your life?
Oh yes. When my mother passed away, I had some worry and I prayer. And then one person, one monk, who also serve 13th Dalai Lama. So he took care of me from my childhood, I think when I was 3 years old, since then that monk was taking care of me. So, in 1959, he also came with me. I can’t remember the year, (but) when he passed away, I really felt very sad and some tears came. But then, in such case, India’s tradition of rebirth, reincarnation, rebirth besides this body, whether you call atma or self (helped). Death does not mean end of everything. No.

All across the world there is widespread fear- fear of getting the virus, fear of death, in fact it’s being called a fear of fear. In your life, even as a young person, did you ever face fear?Oh certainly. In my life, some occasion really very, very… lot of fear. One particular thing, 1959, 17th March… the 10th of March the entire Lhasa people were against the Chinese behavior. And then you see, the next one week I try my best to cool down. I talked to the Tibetan and told them to be peaceful, careful, careful. And on the other hand, the Chinese also should not have used military forces. I tried my best then failed, nothing happened. Meanwhile you see in Norbulingka, where I lived in summer-time, so every night I saw a lot of troop movement, Chinese troop movement. So then I also wrote some letter, but Chinese attitude became more harder and seems they were determined to suppress. So then, on 17th March 1959, I thought…and also we have the tradition, some consultation with state oracle, and some mystery sort of way to investigation. So then, 17th morning, the state oracle also now (say) time has come to leave. Then, that very night I escaped from Norbulingka, with the feeling of whether I will see the next day or not. The road was very close to a Chinese military garrison, military regiment. So, when I (am) on horse, moving without any flash(light), the other side of the river I see Chinese police or Chinese military guard there. I can see. Very much afraid. And then, the whole night we move. Then the next day, sunshine (comes), then I feel now ok. (Dr Roy laughs)

I suppose to have peace of mind one needs peace around you – no wars or violence of one country, religion or caste against another?
It is important that we should be a more compassionate human being. And you shouldn’t pay much attention, my land, their land, my economy their economy. That is the old thinking. Now we should think we, we, we – 7 billion human being.

How much has your life after politics changed. Today – What are your main areas of focus – globally? Now here, I’m human being. I have four commitments. Number 1 commitment, I’m human being. I’m one of the seven billion human being. So basic human nature is, because I am a social animal, compassion. Compassionate. So I’m trying to share (with) others as much as possible. Our basic nature is more compassionate and compassion is ultimate source of happiness, inner peace. So, irrespective whether believer or non-believer, we are social animal so we must pay more attention about karuna or compassion. I’m one of the seven billion human being. I’m trying to promote human compassion . This is number one commitment. Number two commitment, religious harmony. After seeing India I have full confidence religious harmony is possible. And India- all major religious traditions exist here. At intellectual level, or some argument and discussion. Basically mutual respect, mutual learning. All major world’s religion exist in this country. I never heard like shia and sunni complain. In other country, (they are) killing (each other)- shia and sunni. Same follower, follower of same teacher Mohammed. This country, all different religious traditions live together. So religious harmony is possible.

So my main concern is now ecology, Tibetan ecology. People mentioned or expressed that Tibet is roof of the world. We can see all major rivers, Sind in Pakistan. Then major river- Ganga or the Brahmaputra, major Indian river come from Tibet. Then the Mekong river of Vietnam area, then Yellow river in China. So all major rivers come from Tibet. So Tibetan ecology is very important. Within my own lifetime, when I was young, some mountain around Lhasa, during winter time, got more snow. Then during my lifetime gradually less and less. Now Dharamshala itself, in 1960, I came here. That winter, there was a lot of snow. We use to play (with) snowballs and shooting snowball like that. We actually experienced, we witnessed global warming.