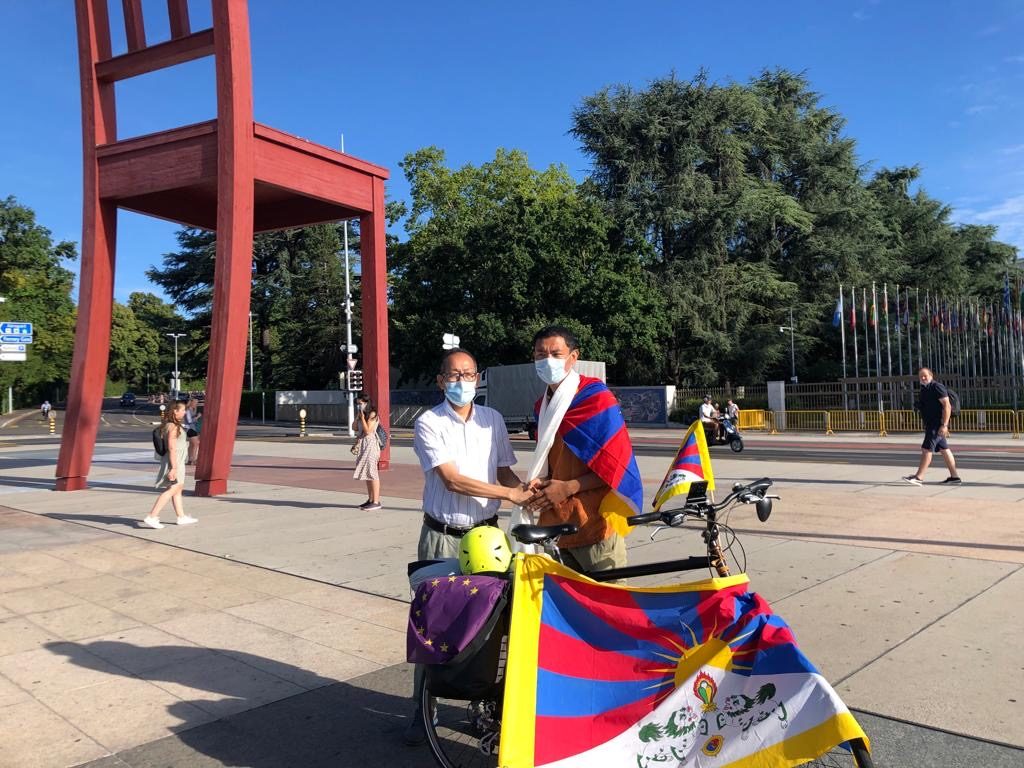 Geneva: The solo Tibetan cyclist Ngawang Tsephel, campaigning for freedom and human rights in Tibet, Hong Kong and East Turkestan (CHN: Xinjiang) arrived today on 19th August in Geneva, Switzerland from Paris, France with an appeal to the UN.

Addressing the UN High Commissioner for Human Rights, Ms. Michelle Bachelet, he petitioned the UN to press China to end its “ongoing violations of human rights and freedoms in Tibet and against the Uighur people in Xinjiang, as well as the overall Chinese aggression towards humans, animals, and the planet earth.” The petition further reads, “the Chinese Communist Party (CCP) today has amassed absolute control in all spheres — public and personal over Tibet and the Uighur people. There is no freedom to study and practice our religion, no freedom to learn and speak in own mother-tongue and no freedom to preserve and promote our culture. Contrary to these wide scale and long-standing violations, the CCP propagates that all the “minorities” are happy in the socialist paradise of China to the world outside. The ban on international media further worsens the picture.”

Tsephel reached the Palais des Nations donning the Tibetan national flag over his traditional Tibetan shirt, with the European Union flag visibly tied to his bike. He was warmly received by Representative Chhimey Rigzen and staff Sonam Therchin from Tibet Bureau Geneva under the iconic Broken Chair. They were also accompanied by the President and Vice-President of Tibetan Community of Geneva along with other local Tibetans as a mark of solidarity and respect despite the Wuhan-originated COVID-19. On witnessing Tsephel’s dedication, Representative Chhimey Rigzen remarked, “It is very encouraging to see young people like Ngawang Tsephel taking individual responsibility and contributing to the Tibetan movement. The issue of Tibet impacts all of us and the responsibility is on all of us equally. With the current global pandemic made worse by the oppressive policies of the Communist Party of China, the world now realizes that the freedom and human rights in one country can have global impact. We all should work together to make the world aware about the egregious human rights situation in Tibet which is now spreading to Hong Kong as well.”

With the support of the Tibet Bureau Geneva, Tsephel will file his 8-point appeal to the OHCHR shedding light on the diverse concerns right from freedom in Tibet, Uighurs in Xinjiang, political demonstrators at Hong Kong, to environmental exploitations and accountability of lives of many that have been affected by the wet market in China. He urges the UN to press the Government of China to stop the dire human rights treatments in these regions, and act like an international player starting with taking accountability for the mismanagement of coronavirus and checking its expansionist agenda. Read the appeal letter attached below. Tsephel had also initiated a petition on Change.org to seek collective support to back his appeal when launching his solo campaign ride. 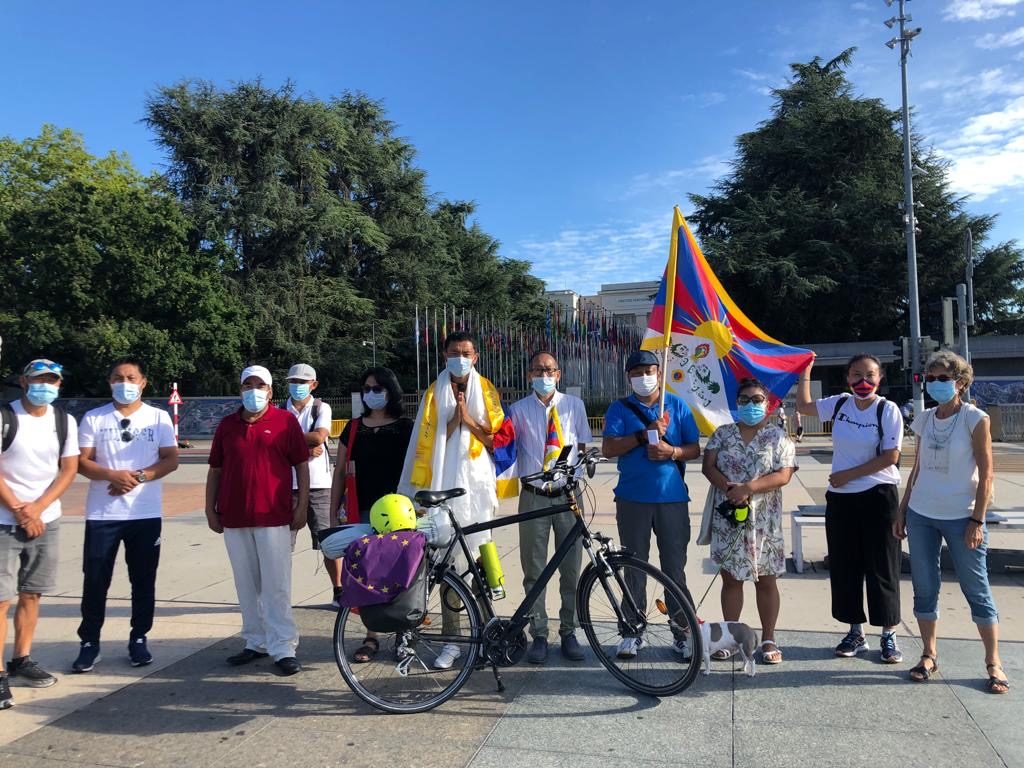 Cyclist Ngawang Tsephel (centre) with Representative Chhimey Rigzen of the Tibet Bureau Geneva, President of Tibetan Community Geneva, and Vice-President with local Tibetans and Tibet supporters in front of the UN Office of Human Rights. 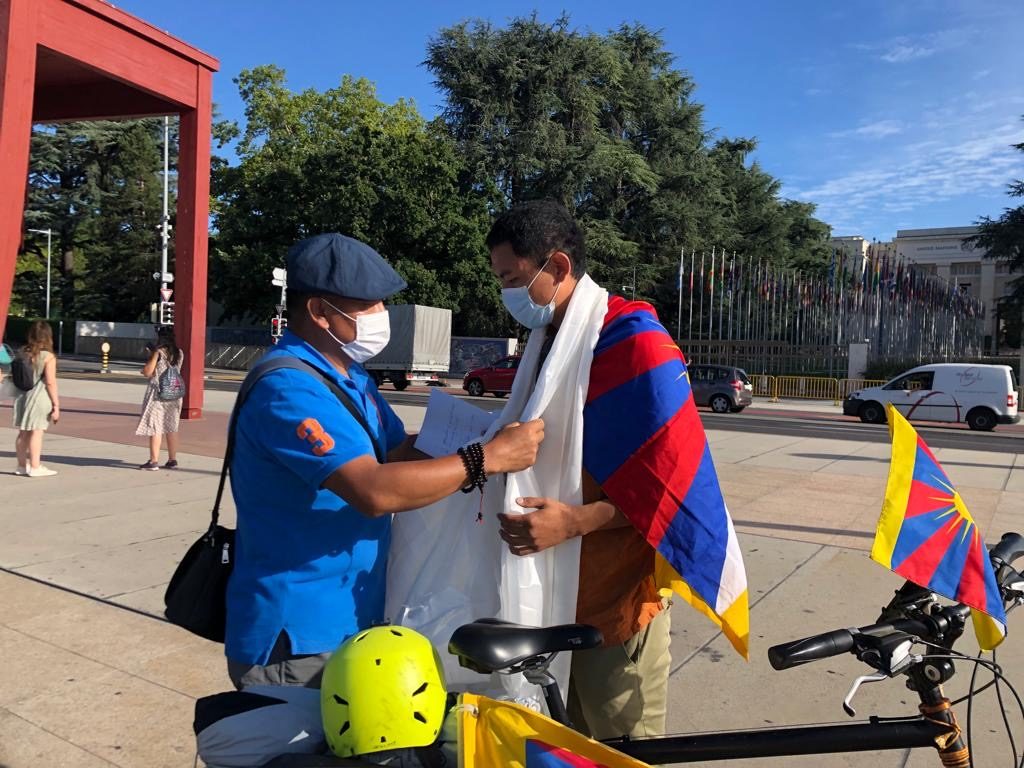