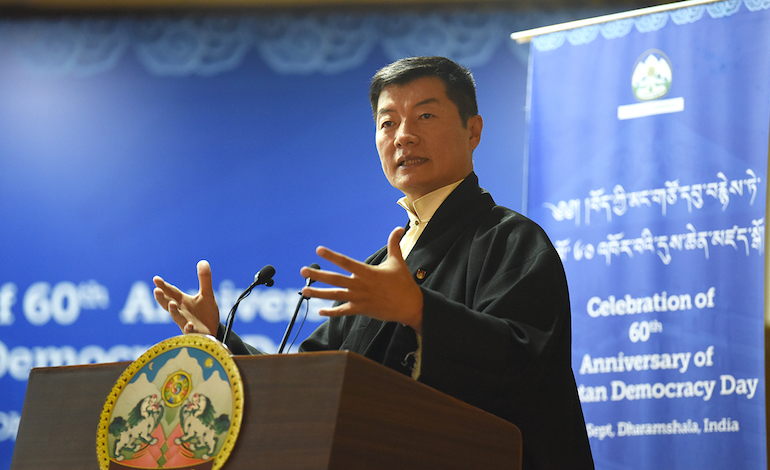 We are gathered here today to celebrate the 60th anniversary of the birth of Tibetan democracy. On this occasion, with deep reverence and gratitude, we pay homage to His Holiness the Great 14th Dalai Lama, pioneer of Tibetan democracy. We also extend our warm greetings to Tibetans in and outside Tibet and our supporters around the world.

In 1952, just two years after assuming the temporal leadership of Tibet, His Holiness established the Reforms Committee to usher in a more egalitarian society. However, this groundbreaking effort was thwarted by the occupying forces of the People‘s Republic of China (PRC). By 1959, as violence was unleashed over Tibet, His Holiness led and cared for tens of thousands of Tibetan refugees forced to leave behind every semblance of their home. Even while shouldering this enormous responsibility, His Holiness established the Central Tibetan Administration (CTA) and continued to pave the way for Tibetan democracy.

On this very day in 1960, the first elected representatives of the Tibetan Parliament-in-Exile took their great oaths and inaugurated the Tibetan democratic system. As we celebrate our democracy and its 60th anniversary, we mark the progress of time. Since its inception,.Tibetan democracy has evolved and flourished under the magnanimous leadership of His Holiness and the toils of our elders who made a significant contributions towards our democracy.

In 1963, the Tibetan constitution based on the ideals of democracy and universal values was enacted by His Holiness. A year later, the progress of our democracy was marked by the election of women representatives in a time when few nations of the world had elected women to parliament. In 1977, we progressed to include Bon representatives.

Then on 11 May 1990, in his address at the Special General Meeting, His Holiness emphasized the need for further democratization of the Tibetan system. The next year, the Charter of the Tibetans-in–Exile was adopted by the parliament and enacted by His Holiness. In 1992, with the establishment of the Tibetan Supreme Justice Commission, the creation of three pillars of democracy, the Judiciary, the Executive and the Legislature, was completed.

With profound concern for the interest of all Tibetans and the Tibet cause, His Holiness in 2001 announced that he would assume a position of semi–retirement and at the same time, called for the first direct election of the Kalon Tripa, the executive head of the CTA. Ten years later, His Holiness announced devolution of all his political and executive power to the Sikyong in a time when several Arab nations were engulfed in pro–democracy uprisings while their authoritarian leaders clung to their positions of political power.

As we look to the past, we experience once again our deep gratitude to His Holiness and also feel proud that Tibetan democracy in exile has walked shoulder to shoulder with the nations around the world as gradual progress is made towards more democratic states.

Today, as we celebrate in exultation the visionary leadership of His Holiness and the toils of the elder generation, many of whom have already passed, we also consider the responsibilities and duties that they have entrusted to us. As we celebrate the trajectory of the young Tibetan democracy in exile, we recall, as well, our responsibility to our brothers and sisters in Tibet who live under a regime whose every action mocks the values and principles of democracy. In the face of this repressive regime that has reinforced efforts to undermine Tibetan language, religion, and identity altogether, courageous Tibetans continue to persevere.

Recently, Xi Jinping, the General Secretary of the Communist Party of China (CPC) in his address at the 7th Central Symposium on Tibet Work held in Beijing on 28th and 29th August, stressed on ensuring national security and enduring peace and stability. He called on for a vigorous pursuit of ideological and political education in schools at all levels to instill devotion for the motherland. Tibet, he said, must be stabilized in order to secure the borders and to ensure China‘s security at large. He further called on the officials to “actively guide” Tibetan Buddhism to adapt to the socialist society and to “promote” its sinicization. The address lauded and claimed the achievement of such policies in Tibet.

In 2019, the US State Department report on International Religious Freedom ranked PRC among the worst offenders. Earlier this year, five United Nations independent mandate holders called on the Chinese government to provide information about the whereabouts of the 11th Panchen Lama and to allow an independent monitor to visit him.

More and more nations around the world are waking up to the threats to global democracy posed by the PRC. In June of this year, senior parliamentarians from eight countries including the US, Canada, UK, Germany, Australia announced the launch of the Inter–Parliamentary Alliance on China (IPAC), a coalition that would seek a proactive approach to the challenges posed by China.

His Holiness‘ unceasing efforts in overseeing the Tibetan polity into a democratic system and guiding the Tibetan movement on the path of non-violence have been admired and supported around the world. His Holiness sowed and nurtured the seeds of democracy and today Tibetans reap its benefits. We also owe a great debt to all the elected officials of the past for their selfless service.

Earlier this month, the Election Commission announced the commencement of the 2021 general elections of the Sikyong and Members of the Tibetan Parliament–in–Exile. The Kashag urges all the Tibetans around the globe to actively take part in this process. We encourage everyone to keep in mind the aspirations of the Tibetan people and our cause and to work towards electing rightful candidates. Our freedom comes with great responsibilities, and we urge and encourage responsible participation, especially on social media, and that we remain united and vigilant against those who seek to incite disharmony.

The task is now on our shoulders to protect and further strengthen our robust democracy. The citizens are at the heart of democracy and Kashag acknowledges the Tibetans for their active engagement in the democratic process. We must continue to strengthen our democracy with renewed dedication and effort.

Taking this opportunity, the Kashag, on behalf of the Tibetans in and outside Tibet, would like to thank all the leaders for their initiatives to right the injustices taking place in Tibet. We are grateful to our supporters around the globe, and especially, to the Indian government and its people for all their support for the Tibetan Democracy–in–Exile and the just cause of Tibet.

Today the world is going through a challenging time due to the global pandemic. We remember in our prayers all the lives lost and also the people who grieve these irreparable losses. We sincerely pray and hope that the pandemic will come to an end soon.

Lastly, we pray for the long life of our most esteemed leader, His Holiness the Great 14th Dalai Lama. May all his wishes be fulfilled. May the just cause of Tibet soon be resolved and may we be united with our brothers and sisters in Tibet.

Note: This is a translation of the Tibetan statement. Should any discrepancies arise, please treat the Tibetan version as final and authoritative.

Previous Post Statement of the Tibetan Parliament-in-Exile on the occasion of the 60th anniversary of the Tibetan Democracy Day Next Post ‘Switzerland Supports Tibet’s Concerns’: Zurich Canton Councilor Mario Fehr flags off Tibetan Peace March from Zurich to Geneva