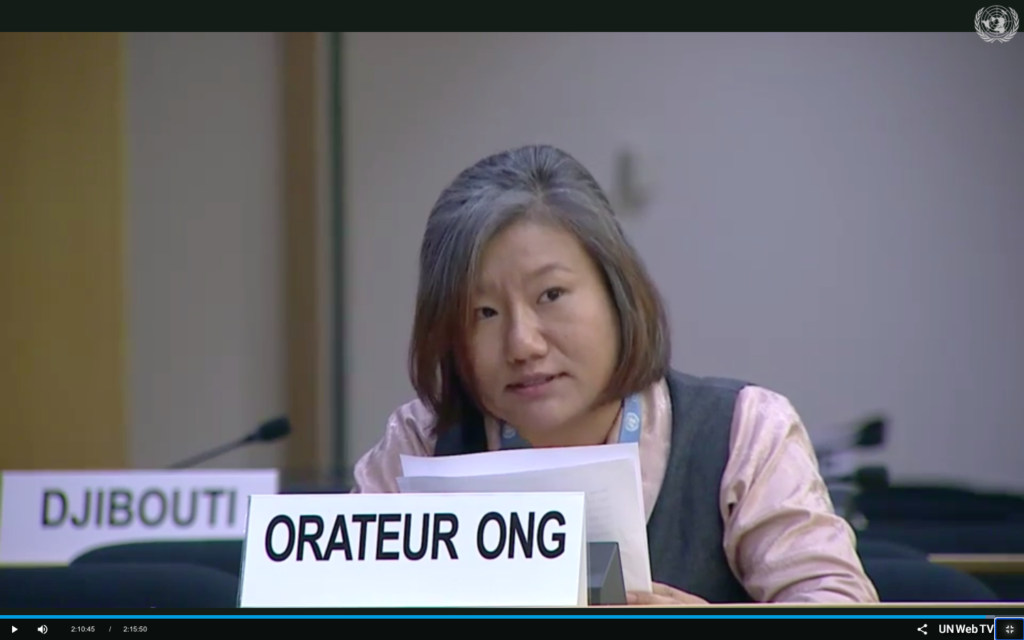 Thinlay Chukki, CTA’s Special Appointee for Human Rights at Tibet Bureau Geneva raises the issue of coercive “Labour Trainings” of over half a million Tibetans in Tibet by China at the ongoing 45th regular session of the UN Human Rights Council, 25 September 2020.

Geneva: On 25 September 2020, at the ongoing 45th regular session of the UN Human Rights Council, the issue of coercive “labour trainings” of over half a million Tibetans in Tibet by China was raised by Thinlay Chukki, CTA’s Special Appointee for Human Rights at Tibet Bureau Geneva.

Speaking on behalf of the Society for Threatened Peoples under the Council’s agenda item no. 4 titled “Human Rights situation that requires Council’s attention”, Ms. Thinlay Chukki drew the attention of the council to the recent reports of “over half a million Tibetans are being subjected to coercive labor trainings with enforced indoctrination, intrusive surveillance, military-style enforcements and harsh punishments.”

Underscoring the destruction of self-sufficient sustainable life style of Tibetans by China, she stated, “first the Chinese government deprived the Tibetans of their livelihood by illegal agricultural land grabs and forceful resettlement of the Tibetan nomads and then in the name of ‘poverty alleviation’ and ‘development’ China is [now] rounding up Tibetans in labour camps and factories for absolute subjugation.”

Noting that the objective of China is total subjugation and suppression of Tibetans, Ms. Chukki stated that “China is using [even] Covid-19 as an excuse to further suppress the Tibetans by sending armed military soldiers instead of medical teams.”

Highlighting the cases of  Panchen Lama Gedhun Choekyi Nyima’s enforced disappearance since 25 years and rights advocates like Tashi Wangchuk, A-nya Sengdra and Sonam Palden, Thinlay Chukki stated that “China is using surveillance, labour camps, arbitrary detention and enforced disappearances as weapons of mass-subjugation with impunity.  Through this China is creating a new-normal weakening the international human rights system and we cannot afford to be mere spectators.”

The UNHRC session will continue till 6 October 2020.

Recently 63 Parliamentarians from 15 countries and the European Parliament have issued a joint statement strongly condemning China for the atrocities and have called upon the United Nations to appoint Special Rapporteur to investigate forced-labour and ethnic persecution in the People’s Republic of China.

The session can be viewed here