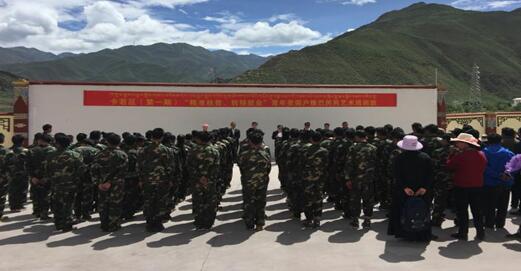 Military-style training of Tibetans in the Chamdo region of Tibet. Source: https://archive.is/HrnXS

Geneva: The German Ambassador Christoph Heusgen read out a joint statement on behalf of 39 countries during the UN Third Committee General Debate at the UN headquarters in New York on 6 October 2020.

The countries expressed grave concerns about the human rights situation in Tibet, East Turkestan (CHN: Xinjiang) and Hong Kong and called on China to respect human rights particularly of Tibetans and Uyghurs. The statement referenced the letter of concern issued by 50 UN Independent Experts from 30 Special Procedures in June 2020 and stated that the countries shared their grave concerns.

The calls by the 50 UN independent was echoed by over 300 civil societies which wrote an open joint-letter to the UN. President of the Central Tibetan Administration, Dr. Lobsang Sangay had thanked the 50 issued a statement urging “UNHRC and the Member States to hold a special session to evaluate the human rights violations being carried out by China and to establish a country mandate of UN Special Rapporteur on China to monitor, analyze and report annually on the human rights situation in Tibet and other regions under the People’s Republic of China. We urge the international community to unite and ensure that China fulfils its obligations under international laws including human rights obligations before it is too late.”

The statement also detailed about the human rights violations in Xinjiang and Hong Kong and called on China to “allow immediate, meaningful and unfettered access to Xinjiang for independent observers including the UN High Commissioner for Human Rights and her office.”

Hailing this as an important milestone, Ms. Thinlay Chukki, Special Appointee for Human Rights based in Tibet Bureau Geneva noted that, “more countries need to group together to question the concerning human rights situation in China especially in Tibet and East Turkestan. China’s human rights violations with impunity in Tibet is emboldening it to take further regressive actions like concentration camps in Xinjiang and the flagrant violations of international agreement on Hong Kong. Our advocacy work for the 45th UN Human Rights Council (UNHRC) concentrated on bringing together Member-States to take holistic approach towards violations by China in Tibet, East Turkestan, Southern Mongolia and Hong Kong. The fire-fighting needs to be strategized and broader plan should be put in place on how to prevent the fire.”

The human rights situation in Tibet is worsening.

The recent reports of militarized forced labour estimates that over half a million Tibetans from rural areas in Tibet were subjected to these forced labour camps with notable accounts of enforced indoctrination, intrusive surveillance, military-style enforcements and harsh punishments notes the report. The same was also highlighted during the 45th UNHRC session.