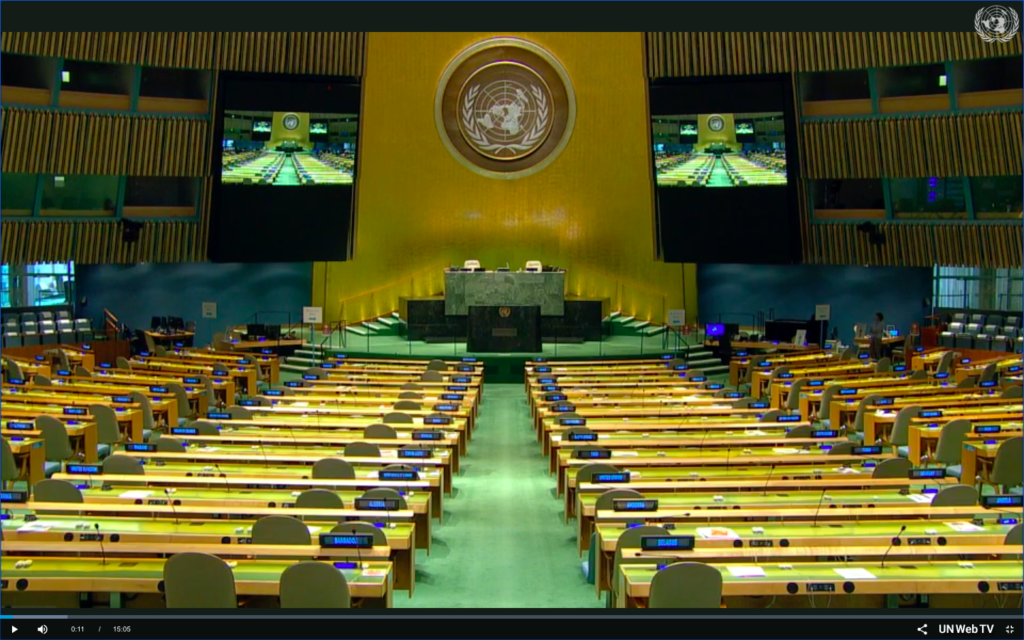 75th General Assembly session at UN Headquarters in New York where the elections to the UNHRC were held. Photo/Screengrab

Geneva: China has been elected to the UN Human Rights Council today, 13 October 2020 during the ongoing 75th General Assembly Session at the UN headquarters in New York. Even though the results were quite expected, the elections, however, saw reduced support to China in comparison to the earlier elections.

President of the Central Tibetan Administration, Dr. Lobsang Sangay remarked, “China’s election to the Council casts an indelible stain on the credibility of the UN Human Rights Council. There is mounting evidence of China’s egregious human rights violations in Tibet, East Turkestan (CHN: Xinjiang), Hong Kong, Souther Mongolia (CHN: Inner Mongolia) and other regions under China. The human rights violations in Tibet have gone from bad to worse with reports of over half a million Tibetans subjected to forced labour camps in Tibet. And yet China is elected to one of the most important UN bodies tasked with the protection of human rights. This undermines the integrity of the Council. However, we should also acknowledge the fact that 41 countries who had voted in favour of China in 2016 have changed their votes and this clearly shows that China’s power is on the decline. More countries should join hands towards making the world a safer place for Tibetans, Uyghurs, Hongkongers and other vulnerable communities suffering under the Chinese Communist Party regime.”

The UN Human Rights Council has 47 member states elected to a term of three years. However, after two consecutive terms at the Council, a member state is not eligible for immediate re-election. The membership of the Council is distributed on equitable geographical distribution and the seats are allocated as follows: Group of African States (13); Group of Asia-Pacific States (13); Group of Eastern European States (6); Group of Latin American and the Caribbean States (8) and Group of Western European and other States (7).