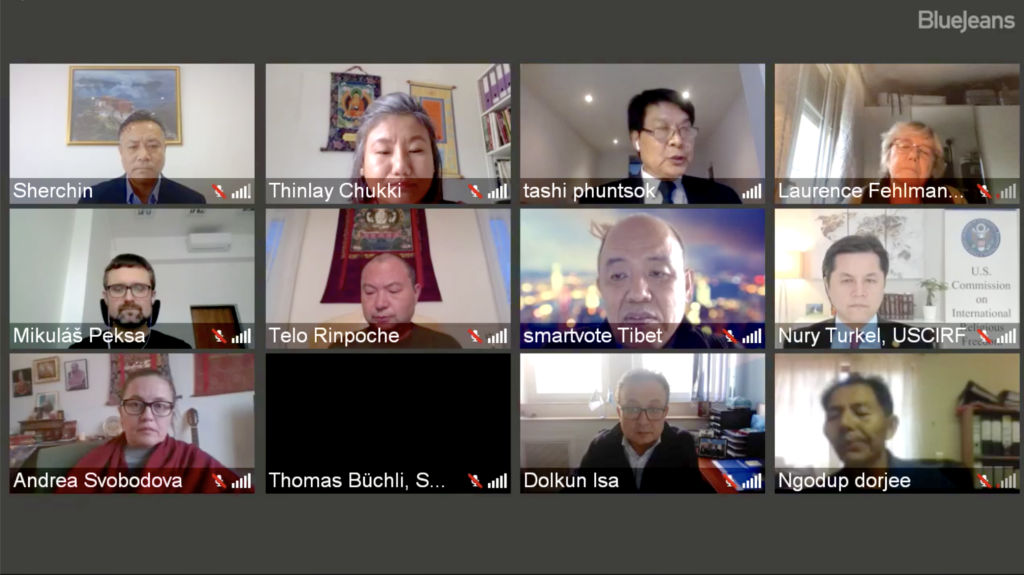 Geneva: China is home to one of the largest populations of religious prisoners. Under Xi Jinping, the Chinese Communist Party (CCP) has pushed to sinicize all religion and to adapt them to the doctrines of the atheist party through a set of stringent policies.

While on paper the Chinese constitution recognizes five religious groups namely Buddhist, Taoist, Muslim, Catholic, and Protestant, in practice, there is a systemic crackdown on religious practices of believers including the selection of their religious leaders, case in point being the continuous Chinese intrusions in the centuries-old Tibetan Buddhist practice of recognition of reincarnated lamas and in particular its intention to meddle in the reincarnation of the Dalai Lamas.

Such was the focus of the first-panel segment of the Geneva Forum 2020 titled “China’s Policy on Freedom of Religion under the Global Framework”, organised by the Tibet Bureau Geneva.

Representative Tashi Phuntsok, Office of Tibet, Brussels opened the session by tracing the evolution of human rights norms established immediately after the world wars which saw China become a Communist state and its continues attacks on religion till the present day.

While referring to China’s approach as “fundamentalism of communism and paramount of communism”, he noted that there is a shift in transition vis-à-vs china’s influence in global geopolitics and freedom.

Panellist Mikulas Peksa, Member of European Parliament, Czech Republic said, “Freedom of religion is a fundamental right in European and international law, recognises faith-based organisations role in development and conflict resolution and it promotes and protects the freedom in its internal and external relations. However, religious freedom is under attack in China.”

Citing the grievance state of freedom of religion in Xinjiang and Tibet, MEP Peksa called for harsher economic sanctions that targeted not just state officials but business involved as well as diplomatic pressure.

“Issues in China is not limited to the right to religious freedom, its authoritarian approach to minorities symbolize genocide.” 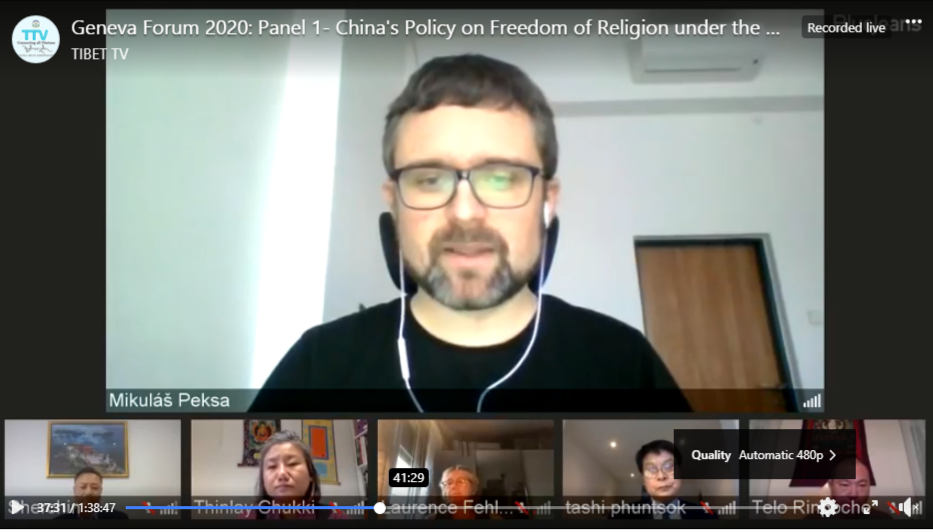 He stressed upon the securitization in ethnic minority regions, increased police presence, surveillance to monitor religious activity and thoughts.

He also mentioned drone images that have recorded evidence of China’s discrimination against minority populations, where individual crimes are used to oppress the larger community. He added that the use of Orwellian technology in collecting private data which extends beyond its own border to control the diaspora to strengthen CCP’s rule was worrying.

MEP Peksa who is also the President of Tibet Interest group of EU Parliament called upon China to investigate the cases of abuses forced disappearances based on their religious beliefs in Tibet, Xinjiang and all ethnic minorities.

Commissioner Nury Turkel, US Commission on International Religious Freedom, emphasized the work of USCIRF which among other functions oversees initiatives such as Religious Prisoners of Conscience Project.

The USCIRF has been consistently advocating for the unconditional release of the 11th Panchen Lama in addition to publishing annual reports through which it recommends countries of concern to be included on US watch list.

“China continues to seek a policy of assimilation of Tibetan Buddhists through sinicization campaigns and its interference in reincarnation issues and forced indoctrination of nuns and monks to study Chinese ideology and its demolitions of places of worship has driven many Tibetans to self-immolation,” he said.

Nury Turkel pointed out that China is in violation of its obligations to international standards that it had signed onto including UDHR, ICCPR, UN Council membership, by continuing to persecute religious minorities. The replication of the repressive mechanism used in Tibet is being scaled up in Eastern Turkestan overseen by the official Chen Quanguo who has been promoted for this scheme. 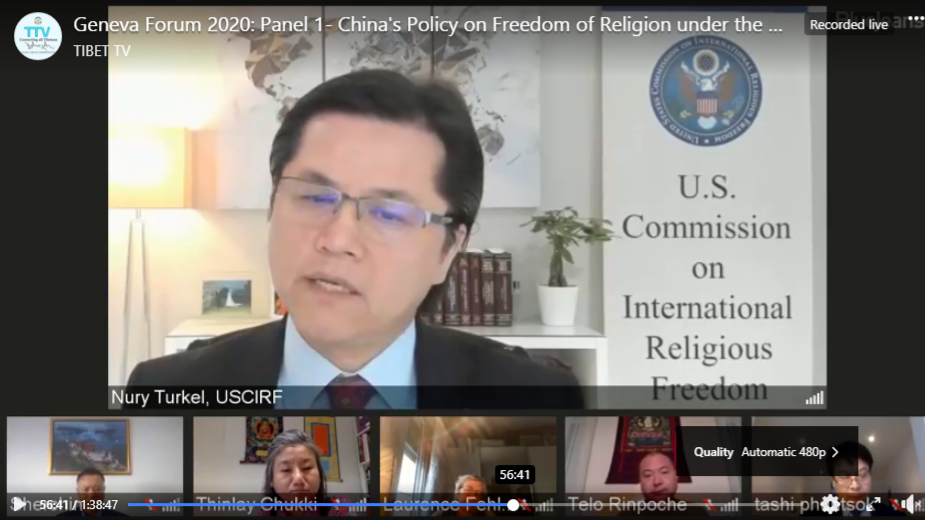 Given the bipartisan, bicameral support for religious freedom in Tibet and Uyghur at all levels of the US administration, the commissioner expressed hope that US’ strong stance on China would bring other allies to do the same.

“By leading the charge against religious freedom violations, it emboldens other like-minded allies to stand up against China and hold it accountable.”

Dr Tsering Topgyal, Assistant Professor in International Relations, University of Birmingham spoke on a range of topics including religious landscape in China, the provision of religious freedom in China’s official documents, the policy-making, and implementation and supervisory body with regard to religious affairs in China with a special focus on the religious policy under Xi Jinping, in particular, the tightening of space and restriction on religious practises under his rule.

Dr Topgyal observed that there is a huge gap between the policy which provides religious freedom in China and its actual implementation on the ground as he lays down the overview of the religious landscape in China.

Given the religious landscape in China, the Chinese official figures report around 200 million Chinese citizens who believe in one religion or another, however, Freedom House released a different figure which reports over 350 million religious believers. Amongst the figures, 185-250 million Chinese practise some form of Buddhism of which around 6 million are Tibetan Buddhists.

According to PEW, there are 60 million Christians believers in China out of which 58 million are protestants. There are 22 million Muslims out of which 11 million are Uyghur Muslims in  Xinjiang.

To answer whether religious freedom is present in China or not, the Chinese constitution and more recent documents state that there is a provision of religious freedom, however, there is a huge difference when it comes to the implementation of policy as the freedom of religion is constantly restricted simultaneously. 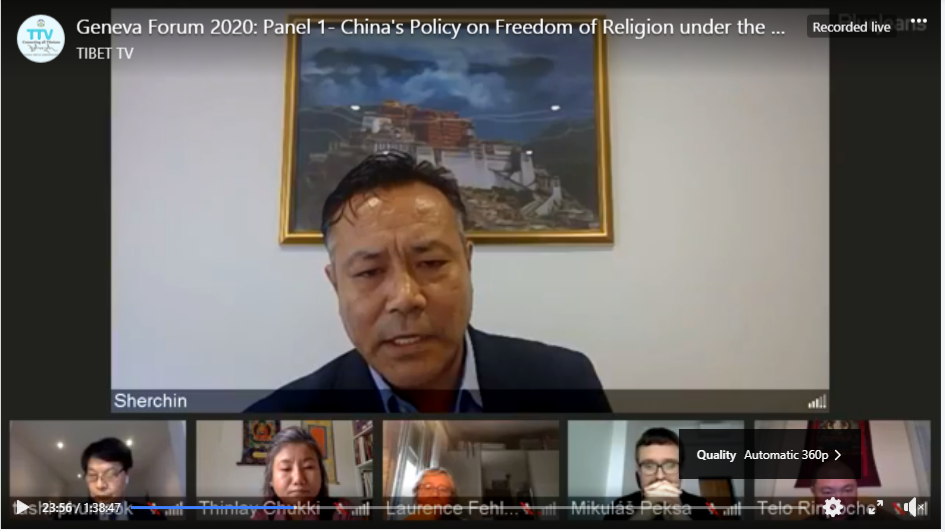 And outside the official documents, freedom of religion is restricted through the use of security forces on religious practitioners.

Delving further into religious freedom in China, he noted that it is imperative to identify who has a role in making policy and implementing policy which at present is in the hands of the United Front Department after the top supervising body, the State Administration for Religious Affairs, was disbanded in 2018.

He explained that religious freedom under various Chinese leaderships went through massive downfall trend and added that religious freedom in China up to Hu Jintao’s leadership enabled a ‘little space and potential’ for the religious believers to ‘co-opt the state body’. Under Xi’s rule, he added that CCP is seen coopting the other way which is restricting and controlling the religious practises to serve the interests of the communist party and the state.

“If you look at issues of Tibet, Xinjiang, and policies toward Buddhists and Muslims we can see that there is a clear agenda of sinicisation. Under Xi-Jinping, the CCP has pushed sinicisation of religion or shaped all religion to conform to the doctrines of the official party and the customs of the major population”.

From a theoretical point of view, Dr Topgyal observed that Xi’s tightening of space for religious space could be attributed to insecurity dilemma as religion being the centre of the religious groups like Tibetans, Uyghur Muslims, and Christians minority’s identities, the communist party sees it as a threatening attack on the party’s core values. 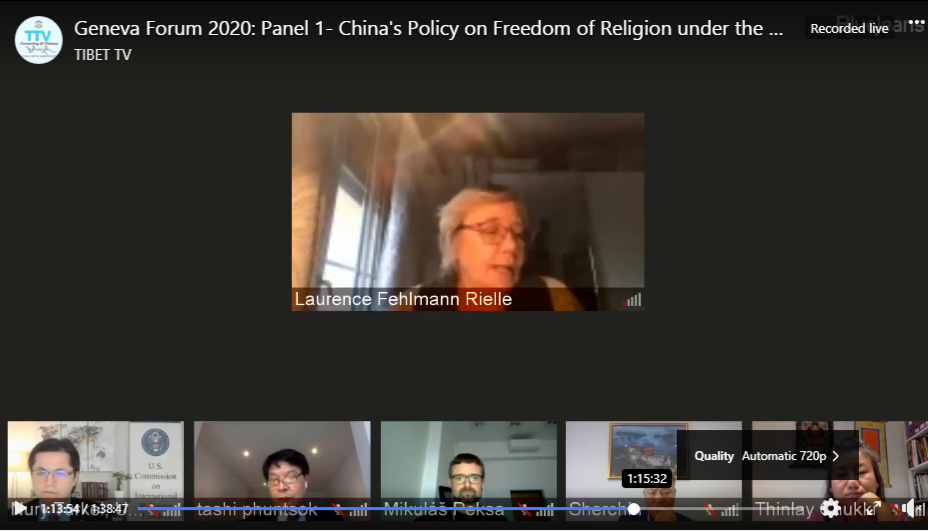 Laurence Fehlmann Rielle, Member of Swiss National Council speaks on the Swiss policy on the freedom of religion vis-a-vis China.

Laurence Fehlmann Rielle, Member of Swiss National Council spoke on the Swiss policy on the freedom of religion vis-a-vis China.

She quoted an article published in 2018 by AP in which China’s reinforcement of restrictions and control on religion was mentioned for instance restrictions on money coming from foreign associations and prohibition on the opening of religious schools.

Councillor Rielle added that Switzerland expressed deep concern and spoke critically on the prevalent human rights situation in China at the 16th session of the Human Rights dialogue between Swiss and China which took place in Beijing.

She mentioned that Swiss was critical about the justice system, the sentences system, and the minorities rights in China, in particular, the protection of minorities and the rights of Tibetans and Uygurs in Xinjiang.

And despite signing a free trade agreement with China, Councillor Laurence Rielle stated that Switzerland has always considered the human rights values above everything and will continue to stand by those values. 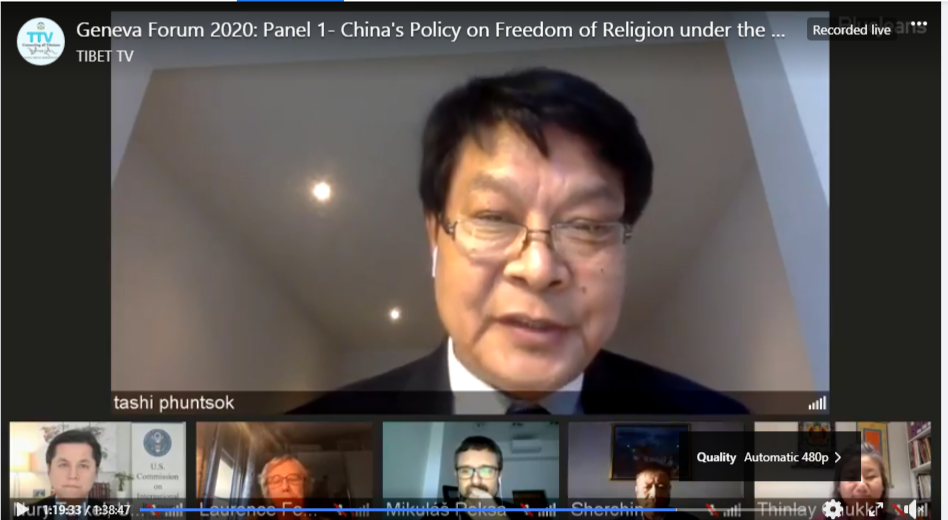 Previous Post “Tibet Was Never a Part of China, But Middle Way Approach Remains a Viable Solution” launched in Czech language Next Post Switzerland holds political dialogue with China, raises concerns on treatment of Tibetans in the backdrop of Swiss Ambassador’s visit to Tibet