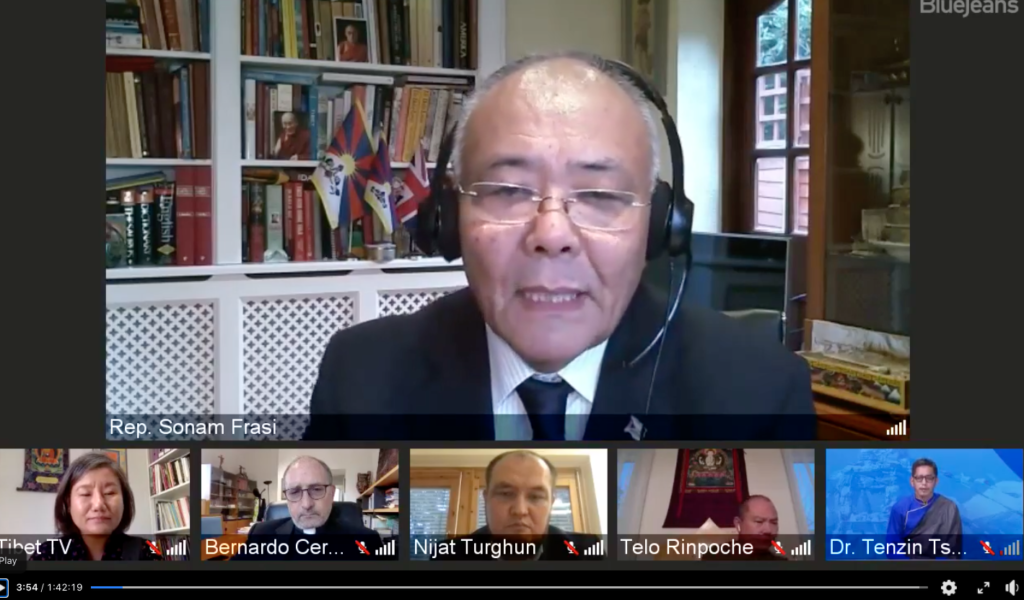 Geneva: China is one of the world’s worst violators of freedom of religion and belief. Even though the Chinese government recognizes five religious groups namely Buddhists, Muslims, Taoists, Catholics, and Protestants under the umbrella of “Patriotic Religious Associations,” it continues to meddle with and control their religious beliefs and traditions. Even these religious groups that have government recognition are not free of oppressive mistreatments. Tibetan monks and nuns, Uighur Muslims, Christians, and other believers are often persecuted and are subjected to torture, physical abuse, arrest, detention, imprisonment, and harassment.

Additionally, China’s heavy investment in the latest high-tech surveillance systems is a product of the need to facilitate its oppression of religious practices to a whole new level.

On that note began the second panel of the Geneva Forum titled Religious Persecution: Crackdown on People of faith in China.

Representative Sonam Frasi, Office of Tibet London opened the panel by underlining that communism in China is the product of the insecurity of the corrupt party officials who would rather use force, violence, control, and intimidation to coerce the religious groups and people of faith to their ideology.

“Nation ruled by corrupt party officials with no respect for civil liberty, freedom of religion and human rights where religion is considered a poison by its leaders shows the depth of religious intolerance in China,” said Representative Frasi.

Religion and Religious institutions are branded as reactionary and treated as enemies of the communist party and the state.

Representative cited historical evidence that suggested that Mao Zedong was jealous yet interested in the Vatican and the power of the pope to command allegiance beyond the national boundary. He said that the tenacity and effectiveness of the Catholics greatly perturbed the communist regime and this led to the persecution of Tibetan Buddhists, Uyghur Muslims, Christians, and other people of faith.

Dr. Tenzin Tsultrim, Visiting Research Fellow, Tibet Policy Institute spoke on the prevailing condition of religious practice in Tibet and why Tibetan Buddhism is still being repressed by the CCP.

Similar points were also emphasised in the 17 point agreement, added Dr Tsultrim, CCP promising protection of religious belief of the Tibetan people. It was mentioned in the agreement that the PLA entering Tibet shall not arbitrarily take anything that doesn’t belong to them but the reality, however, was PLA took away everything including Tibetan people’s freedom of religion and language.

Dr Tsultrim added that the crackdown on Tibetan Buddhism intensified in the last few years with the unprecedented increase in the intensity and the diversity of China’s surveillance system in Tibet. 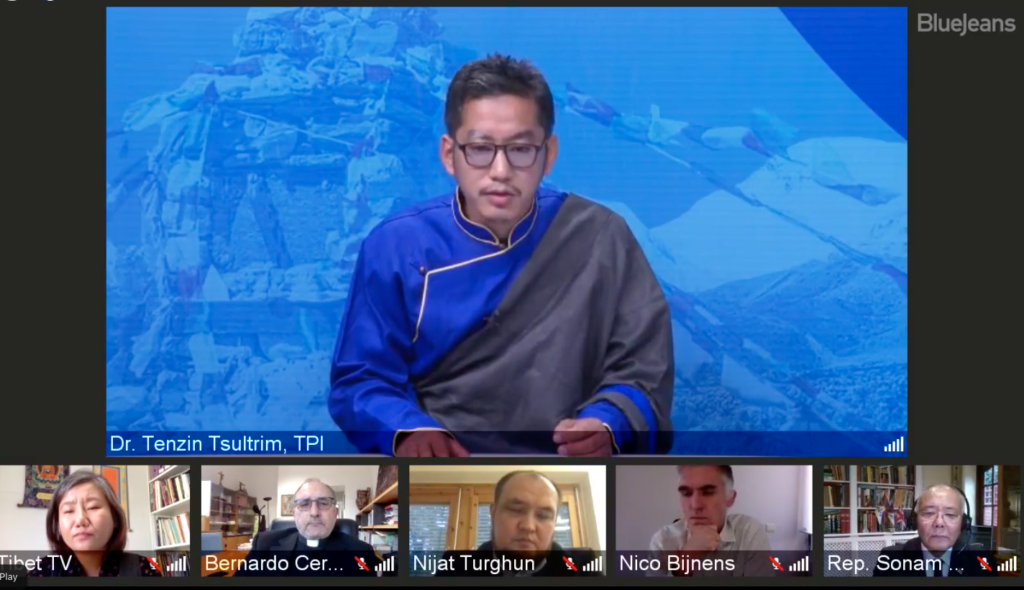 In 2011, around 21,000 Chinese communist members were stationed across Tibet to observe and scrutinise the movement and activities of the Tibetan people. Such a village-based cadre system covered around 1700 religious sites to observe the religious activities of the monks and nuns. And between 2012-2016, the TAR established 81140 double-linked households covering 3 million residents to monitor the potential threat of so-called religious extremism including targetted individuals on the watch list.

He observed that CCP’s intention behind all these mechanisms is to simply catch such incidents early and for the past few years CCP has attempted to systematically infringe traditional values and tradition of Tibetan people which were off CCP’s political radar. For instance, he reported that in 2017, schools in Lhasa were strictly notified to disengage children from taking part in any religious activities. Also, retired Tibetan government employees were restricted from engaging in religious activities.

“All these measures indicate increasing repression on religion in Tibet” added Dr Tsultrim.

As for why Tibetan Buddhism is still repressed in Tibet, Dr Tsultrim explained that by destroying the language and culture of Tibetans, CCP realised their potential to destroy Tibetan identity without realising that religion also plays a vital role in sustaining the identity. Having understood the significance of religion for the Tibetan people, the CCP began to consider religion as a threat.

“Many of the lawmakers, experts, and scholars on Tibet have shared consensus about causes and implication of CCP’s continuous repression in Tibet and most of their writings emphasised CCP’s sense of insecurity against the growing fascination of Tibetan Buddhism among Chinese citizens and the strong devotion of Tibetans toward their religion including the Dalai Lama”, he explained.

Dr Tsultrim further explained how the destruction of two of the largest Buddhist institutions in Tibet, Larung Gar, and Yachen Gar, was not due to overcrowding issue and development project but that it is an attraction for those interested in Tibetan Buddhism conforms to CCP’s insecurity against the potential spread of religious ideologies which they considered it as a threat to the legitimacy and authority of the CCP rule.

He said that while China’s constitutional law mandates freedom of religion to all the citizens of PRC but the ground reality is different when it comes to implementation.

“The reality of religious status in East Turkestan from 1949-1958 was the first time China tried to exercise full and effective control over religious affairs through administrative agencies”, said Mr. Nijat

He mentioned that the CCP tried to enforce China’s socialist ideologies and characteristics in the management of the religious affairs in East Turkistan. And during the cultural revolution, China criticised religious freedom and called religion a poison, and strongly considered it as a negative aspect. The religious issue got completely entangled with political issues.

Nijat Turghun noted that however, after the cultural revolution ended PRC did offer some space for religion in East Turkistan but even then he said it was illegal to study Islam as religious activities were closely monitored. 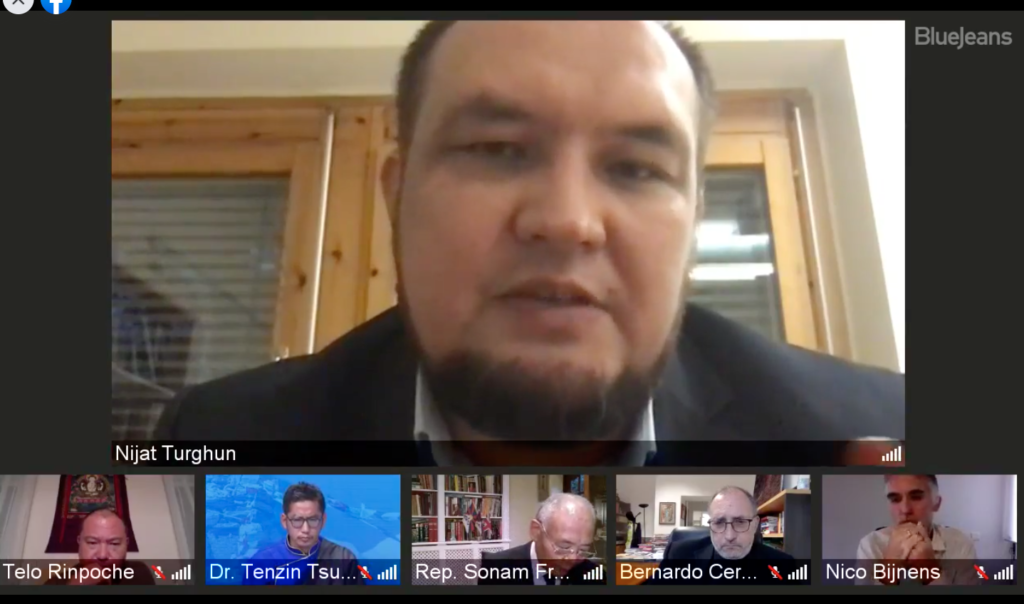 “In 2016 China established one state control of religion and expanded into other activities pertaining to religion such as religious education, religious press, and publication. The Uyghur religious identity was coupled with extremism and separatism and called the Uyghurs a terrorist group and since then the religious identity of the Uyghur was brutally targetted by the CCP”.

He cited a statement issued by Jiang Zemin, former general secretary of CCP in 2012 which states that ‘the party will not allow the use of religion to oppose the Party’s leadership and the socialist systems or undermine the unification of the state and unity among various nationalities’.

The Party secretary believed that proper management of religious affairs was needed in East Turkistan and that’s when intensive restrictions on freedom of religion and practice were imposed including control of religion in the education system and anyone found to be violating the ground rules were considered ‘offenders’ and were put into arbitrary detention, he added.

Sinicisation of Islam began with the destruction of religious buildings and the elimination of religious identity and belief through the marginalization of the Islamic community and to date, the Muslim minorities in China are forcibly put into concentration camps where they are coerced to adopt and cultivate the Party’s ideologies.

Father Bernardo Cervellera, Director, AsiaNews, briefed about the persecution of Christians in China and highlighted the ongoing government crackdown on Christian minorities. He related that during Mao’s regime, Christian Protestants were forced to renounce their denominations and forced to unify under the serf patriotic movement.

He noted that despite falling under the dictionary definition of persecution, there are political and religious leaders who do not come forward to recognise it and minimize it as an obligation somewhat strictly enforced by the Chinese government.

Arguing, he stated, “Obliging people to follow rules, against their will and their faith is persecution”. He raised instances of ‘forced disappearance’ of religious leader and members, and linked it with “aim to reduce and eliminate” expression of faith ”, and fabricated crimes citing instances such as that of a Reverent Zao who was charged with terrorism for not registering in the self-patriotic movement and risked facing up to 10 years of imprisonment.

Emphasising the irony of “An atheist religion becoming the guide of a religious institution”, he noted that it was in line with CCP founder Mao Zedong and successors’ policy to control or destroy all religions and follow the guidance of the CCP. 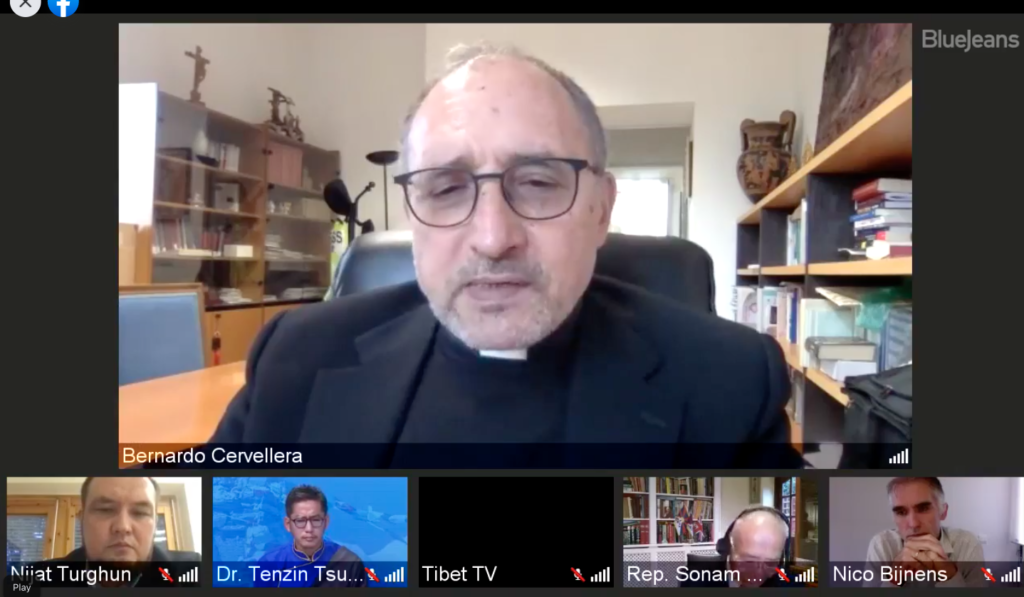 The increasingly dire situation since February 2018 when new rules for religious activity were issued requiring religious organisations to register with government authorities to hold a religious activity that set the penalty at 13,000-40,000 Euros; shutting down of religious centers and the demolition of religious sites citing the example of churches in Hunan and Xinjiang that were carried out during pandemic lockdown. Land seizure of individuals from minority communities for development projects and not providing compensation.

Under the Sinicization programme, churches are forced to assimilate under Chinese ideology and create theology and rewrite history, and religious iconography was demolished for not being Chinese.

Religion is viewed as a threat and a divisive factor that undermines ethnic unity according to CCP  with a surveillance system scaled up to monitor and control thoughts and activity, its control extending beyond the political realm into businesses.

Father Bernardo urged the international community and all religious communities to press China “to produce a law on religion, not regulations to control religion as an ill aspect of society” for the benefit of the Chinese people.

Speaker Nico Bijnens, Falun Gong Practitioner, and Human Rights Activist spoke about the persecution of Falun Gong practitioners in China. He explained that CCP’s targetting of Falun Gong members were rooted in its perceived threat to the Party due to its popularity and hundreds of millions of followers that led to its ban. Crediting CCP’s nervousness with the religion’s popularity, rooted in authentic Chinese culture and providing a bridge to the past, that drove its crackdown on Falun Gong practitioners marked by mass arrests and disappearances.

Despite all appearances of material advancement in the image of the western capitalist state which far exceeded the scale of economic and technological progress, China’s horrific atrocities proved its disinclination to subscribe to principles of democracy and human rights. 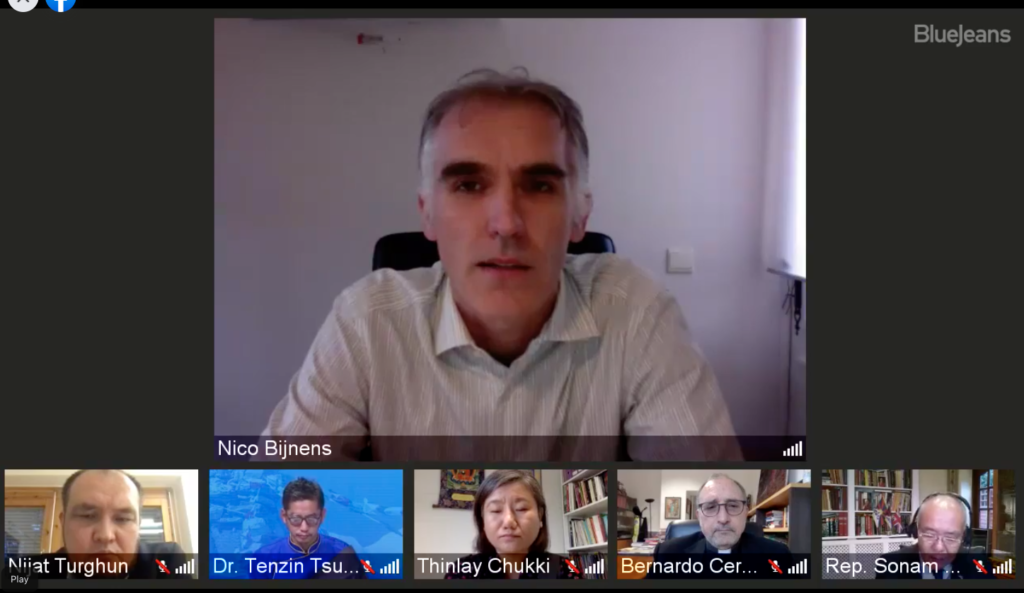 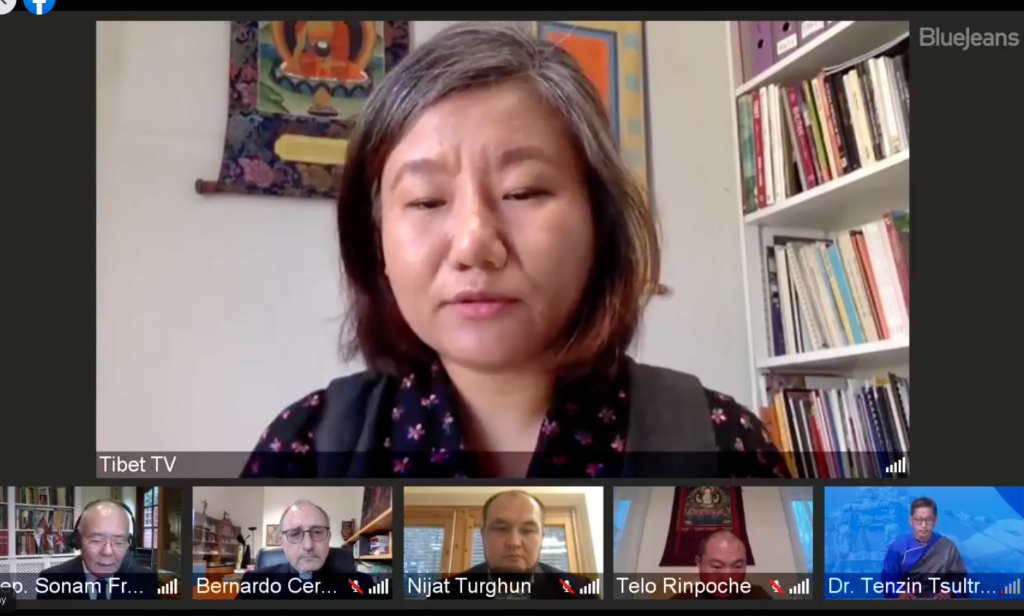