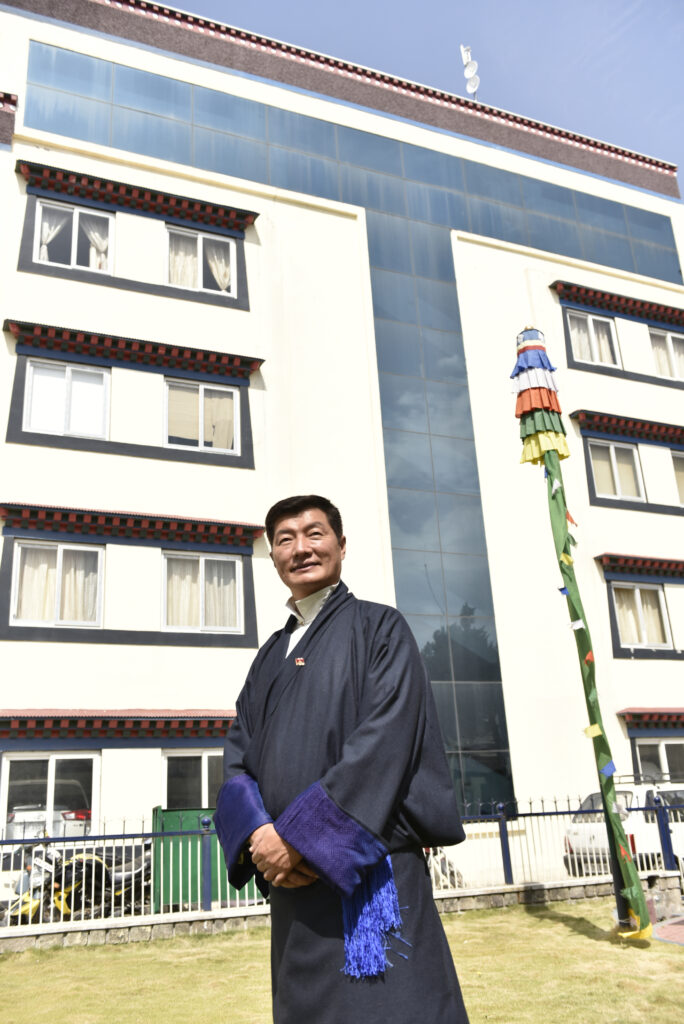 Sixty-two years ago, on this day, thousands of Tibetans in Lhasa rose in unison to protest against the rule of communist China.  The Central Tibetan Administration remembers and honors the courage and spirit of the martyrs. We remember too, Tibetans in Tibet who remain in the clutches of tyranny. Our prayers and thoughts are with them and we continue to stand in solidarity with them.

On 10th March 1959, His Holiness the 14th Dalai Lama was invited to a theatrical performance at the Chinese army headquarters in Lhasa. A day before the event, His Holiness was asked to attend the event unaccompanied by his guards. When this information reached the people, thousands of Tibetans formed a human chain around the Norbulingka palace to protect His Holiness. Seven days later, shells of the two mortars fired from a nearby Chinese army camp fell outside the palace’s northern gate, and His Holiness was forced to leave that very night. In the early hours of the 20th March, mortars and gun fire rained down on the Tibetan people and in the following days thousands were massacred. These acts further confirmed that China, who had positioned itself as a “liberator” since invading Tibet in 1949 was, in fact, the colonizing oppressor.

Over a million Tibetans have lost their lives in the past six decades under Chinese rule. Today, we have come together to collectively mourn this loss. But we are also here to mark the undaunted resilience of Tibetans in Tibet. Even under the threat of losing their lives, they continue to protest by protecting and preserving our language, our religion, our land, and our identity.

On 19th January this year, 19-year old Tenzin Nyima, a monk from Dza Wonpo monastery in Karze prefecture died of injuries sustained in prison. He had been brutally tortured. What was his crime? He had participated in a peaceful protest. We cannot help but think about the fate of other young monks and laypeople who were at the same protest in November 2019 and who were also detained and imprisoned.

Barely a month after the death of Tenzin Nyima, another Tibetan political prisoner, Kunchok Jinpa, a 51-year-old tour guide from Chagtse township in Driru county, died of injuries inflicted while in prison. He had been serving a 21-years sentence in prison since 2013 for his alleged role in sharing the news of local environmental and other protests in his region to foreign news outlets. The tragic stories of Tenzin Nyima and Kunchok Jinpa help illustrate the gruesome reality of Tibet.

In its annual report last year, the US Congressional-Executive Commission on China (US CECC), reported worsening human rights and religious freedom in China. It expressed concern over the Chinese government’s sinicizing of Tibetan identity and over the widespread arbitrary arrests of Tibetans. In fact, China’s State Administration of Religious Affairs last month produced an order titled “The Administrative Measures for Religious Personnel,” which aims to enforce new strictures on religious gathering, teachings, and religious activities. The new order set to be enforced from May 2021 also aims to eradicate perceived ‘foreign influence.’

One crucial example of the Chinese government’s blatant disregard and intrusion on the Tibetan people’s religious freedom is found in the story of Gendhun Choekyi Nyima, the 11th Panchen Lama. This May will mark the 26th year since the abduction and forced disappearance of Gendhun Choekyi Nyima, his family and Chadrel Rinpoche, the former abbot of the Tashi Lhunpo monastery.

For years, the UN Committee on the Rights of Child and the Working Group on Enforced or Involuntary Disappearances, international organizations, parliaments and governments, and Tibet supporters worldwide have passed resolutions and reports seeking information and the release of the 11th Panchen Lama. A month-long global advocacy campaign was launched by the Central Tibetan Administration through the Offices of Tibet in 2020. We remain steadfast in our advocacy for the release of the 11th Panchen Lama.

Despite these joint concerted efforts, China continues to parrot lies justifying the abduction of a six-year-old and his enforced disappearance. If there is any truth to the Chinese government’s denials of abduction and harm to the Panchen Lama, it must be able to provide evidence of the 11th Panchen Lama, his family, and Chadrel Rinpoche through recent authenticable photo and video.

Censorship and surveillance in Tibet have reached unprecedented levels further escalating the violation of the Tibetan people’s fundamental rights. On 24th December 2020, authorities in the so-called Tibet Autonomous Region (TAR) announced criminal prosecutions against individuals who use online communication tools to “split the country” and “undermine national unity”, which will further aid the government in its persecution.

It is not surprising that China has been listed as the worst internet abuser in the world in Freedom House’s 2020 report on Internet freedom. Similarly, China is ranked at the near bottom at 177th in the 2020 World Press Freedom Index, compiled by Reporters Without Borders (RSF). Every year the Index evaluates the situation for journalists working in 180 countries and territories.

Last December, a 30-year-old Tibetan nomad Lhundup Dorjee from Machin Golog Prefecture was sentenced to one-year imprisonment for posting a video of His Holiness’ teaching on Weibo, a micro blogging site.

Heavily fortified in a digital cage, it is near impossible to get information out of Tibet. This past January, we received news of the self-immolation protest by 26-year-old Shurmo from Driru Shagchukha village, five years after the event. This sheds light on the extent of information control and surveillance being carried out in Tibet.

Shurmo is one of 155 Tibetans who have self-immolated since 2009. 133 Tibetans have died following their protests. The stranglehold of Chinese rule in Tibet has driven Tibetans inside Tibet to resort to extreme measures to voice their resentments against the policies and practices that threaten Tibetan identity, religion, and culture. Even as they were engulfed in flames, they called for the freedom for the Tibetan people and the rightful return of His Holiness the Dalai Lama to Tibet. The reality in Tibet is reflected in the Freedom House’s annual report of 2021, which lists Tibet as the least free region in the world alongside Syria.

Today, China’s tentacles have reached beyond Tibet by using its growing economic clout to jeopardize global democracy. According to Freedom House, China conducts the most sophisticated, global, and comprehensive campaign of transnational repression in the world.” It highlights the CCP’s efforts to control and pressure Chinese citizens, political dissidents and minority communities such as Tibetans, Uighurs and Hong Kong beyond its borders. The democracies around the globe must come together to thwart such assaults on global democracy.

On 27th December 2020, then President of the United States signed into law the Tibetan Policy and Support Act 2020 (TPSA). The TPSA significantly updates US policy and support for Tibet. It firmly asserts that the reincarnation of the Dalai Lama and other Tibetan Buddhist leaders are religious matters and all decisions pertaining to reincarnations rest solely on the Dalai Lama, the Tibetan people and the Tibetan Buddhist community. It further warns of sanctions against any Chinese authorities who interfere in this matter. The bill formally acknowledges the Central Tibetan Administration and recognizes the significance of the Tibet’s environment and its plateaus.

We thank the United States government, Congress and the Senate, and especially the bill’s sponsors and co-sponsors. We also thank all the organizations and individuals who supported in the swift passage of the bill.

We are grateful to the US Secretary of State Anthony Blinken for assuring a speedy appointment of the US Special Coordinator for Tibet Issues. We also urge the Biden Administration for swift appointment of the US Special Coordinator and also for the further implementations of key legislations such as the Reciprocal Access to Tibet Act 2018 and TPSA 2020.

The US CECC has recommended the US Congress and the US Administration to urge the Chinese government to “cease treating the Dalai Lama as a security threat” and resume dialogue with the envoys of His Holiness without any preconditions. My administration is committed to the Middle Way Approach in seeking genuine autonomy for all of Tibet.

We stand united with our brothers and sisters in Tibet, especially with the political prisoners who remain resolute despite the inhumane treatment and torture they suffer in Chinese prisons. We welcome the recent news of the release of Tibetan language advocate Tashi Wangchuk after a five-year sentence. We call on the Chinese government to release all the political prisoners of conscience, including the 11th Panchen Lama.

As we move to the final round of elections for the Sikyong and the 17th Parliament, we urge responsible participation, especially on social media. We enjoy the benefits of the democracy bestowed upon us by our great leader, and we must exercise this right responsibly. We must remember to honor the hopes and aspirations of our people in Tibet.  We can do so by strengthening our democracy in exile and our cause for freedom and justice.

We bow in obeisance to His Holiness whose tireless efforts have led to global support for the Tibet cause and the establishment of a resilient Tibetan administration and community in exile.

My Administration has worked towards furthering our cause and carrying the voices of Tibetans in Tibet to the world. At the same time, we have directed our efforts to further the welfare of the Tibetan diaspora. It has been an honor, and we thank all of you for your support.

Our continued struggle for freedom would not be possible without the support of our friends from around the globe. The Kashag, on behalf of the Tibetans in and outside Tibet, especially thanks the government of India and its people for their continued generosity and support. We thank leaders, governments, parliaments, organizations and individuals who stand for justice, equality and freedom and who continue to support the just cause of Tibet.

Lastly, we pray for the long and healthy life of His Holiness the Great 14th Dalai Lama. We pray for the earliest arrival of the day when the ray of peace and freedom will shine upon the Land of Snows.

Note: This is a translation of the Tibetan statement. Should any discrepancies arise, the Tibetan version is to serve as final and authoritative.

Previous Post Statement of the Tibetan Parliament-in-Exile on the commemoration of the 62nd Anniversary of Tibetan National Uprising Next Post Historic Moment: Tibetan National Flag Hoisted on Czech Parliament Building for the First Time in History