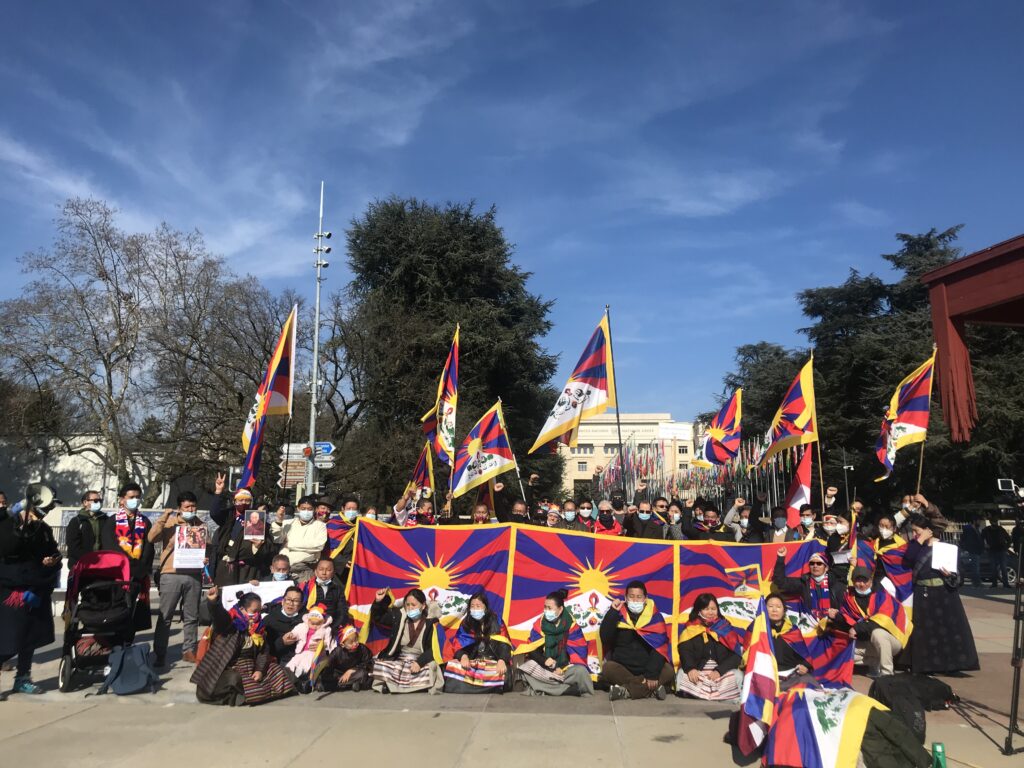 In Geneva, the demonstration was led by TCSL in front of the UN building coinciding with the 46th UNHRC session. It was attended by 50 people including Representative Chhimey Rigzen, Tibet Bureau Geneva; Hon’ble Emmanuel Deonna, Geneva Cantonal Councilor from the Social Democratic Party; Mr. Jacques Arnal, activist and Representative of Swiss-Tibetan Friendship Association; the out-going and incoming presidents of TCSL Norbu Tsamda and Karma Choekyi respectively; and representatives of various sections of TCSL. While addressing the gathering Hon’ble Emmanuel Deonna, Geneva Cantonal Councilor from the Social Democratic Party, cherished and reaffirmed the friendship of Switzerland with Tibetans since last sixty years. Extending his support to the Tibetan freedom movement he said “support to Tibetans’ non-violent struggle implies support to all the people who are deprived of their rights across the world.” A joint petition was submitted to the UN High Commissioner for Human Rights Michelle Bachelet calling upon her to break her silence on atrocities in Tibet.

In Bern, the demonstration was led by Tibetan Youth Association in Europe (TYAE) which held a “mass funeral exhibition” with 24 caskets honoring the fallen brothers and sisters who sacrificed their lives for Tibet. The TYAE President Tashi Shitsetsang, Vice-President Dalha Kharsar and several other executive members of the TYAE were present at the exhibition explaining to the curious onlookers the significance of the demonstration.

The demonstration in Zurich was led by the Swiss Tibetan Women Association in front of the Chinese consulate in Zurich. Hon’ble Mario Fehr, Government Councilor of Zurich and Swiss Parliamentarian and co-chair of Swiss-Parliamentary Group for Tibet Hon’ble Fabian Molina sent their written messages supporting the Tibetan struggle. Hon’ble Mario Fehr noted that “Switzerland recognises the legitime concerns of Tibetans and that the Chinese government must be reasonable in making the proposal for genuine autonomy for Tibetan people possible.” Assuring his continued support, Hon’ble Fabian Molina noted that with the growing awareness about China’s continued human rights violations, the relation and business with China “as usual is no longer possible.”

A group of Tibetan youth volunteers from Switzerland initiated a postcard campaign whereby over 2,500 Tibetans and supporters sent individual postcards on the eve of the Tibetan National Uprising day, calling on the UN High Commissioner for Human Rights Michelle Bachelet to break her silence on the deteriorating human rights situation in Tibet.

Posting in her social media platform, Vice-President of the German Parliament Hon’ble Claudia Roth, commemorated the day by recalling her last visit to Dharamshala in India, the exile seat of His Holiness Dalai Lama in 2015. Hon’ble Roth posted “The day is a reminder of the targeted destruction of Tibetan culture, daily oppression and discrimination faced by the people of Tibet.”

The Tibetan Community of Italy, Italia-Tibet, the Tibetan Women’s Association along 16 organizations held a demonstration in Rome, the capital city of Italy. Furthermore, the Italian Intergroup of Parliamentarians organised a press conference in the Italian Parliament Conference Hall of the House of Deputies with President Dr. Lobsang Sangay as the Chief Guest and was broadcasted live on the Parliament’s website. It was organised in collaboration with Tibet Bureau-Geneva, Tibetan Community in Italy and the Italy-Tibet Association and attended by several parliamentarians including the President of the Italian Intergroup of Parliamentarians On. Luciano Nobili, On. Matteo Luigi Bianchi, On. Antonella Incerti, On. Augusta Montarulli, On. Federico Mollicone, On. GIGLIO VIGNA Alessandro, On. Yana Ehm and Representative Chhimey Rigzen of Tibet Bureau Geneva. On. Paolo Grimoldi, member of the Italian Parliament and On. Anna Cinzia Bonfrisco, member of European Parliament also tweeted expressing strong support to Tibetans.

Lungta, a Tibet support group in Czech Republic, placed 155 flags before the Chinese Embassy in Prague representing each of the 155 Tibetan self-immolators in Tibet since 2009.

The Tibetan community in Austria organised demonstrations in Vienna and Salzburg. Tibetans along with their supporters marched towards the Chinese Embassy in Vienna and later submitted appeal letters accompanied by the statement of the President from Central Tibetan Administration to the Ministry for Human Rights and Minority Issues and Vienna based human rights organisations.

In Slovakia, Members of the Slovakia Parliamentary Group for Tibet commemorated the Tibetan Uprising Day by displaying Tibetan national flags inside the parliament building in Bratislava, the capital of Slovakia. In Šamorín, the friends and supporters of Tibet commemorated the day by holding a demonstration and hoisting Tibetan flag in front of At Home Gallery, a synagogue building which was almost destroyed during the communist regime. His Holiness the Dalai Lama had visited the place thrice in 2000, 2009 and 2016.

In Hungary, an appeal letter accompanied by the statement of the President of CTA was delivered to the Chinese Embassy in Budapest followed by a solo protest in front of the embassy.  Furthermore, a public event including a book reading of Red Star Over Tibet authored by Prof. Dawa Norbu was organised in Shambala Tibet Center. Tibetan flags were also hoisted in two major bridges in Budapest: Erzsébet and Chain bridges.

Chhimey Rigzen, Representative of His Holiness the Dalai Lama and the Central Tibetan Administration for Central and Eastern Europe based in Tibet Bureau Geneva thanked the political leaders, Parliamentarian Groups for Tibet, Tibet Support Groups and civil societies for their continued support to Tibet and for participating in the 62nd commemoration of Tibetan National Uprising Day. He noted, “10 March is a historic day to remember and honor the courage of Tibetan martyrs and to commemorate millions of Tibetans who have lost their lives due to illegal occupation of Tibet by Communist China.” 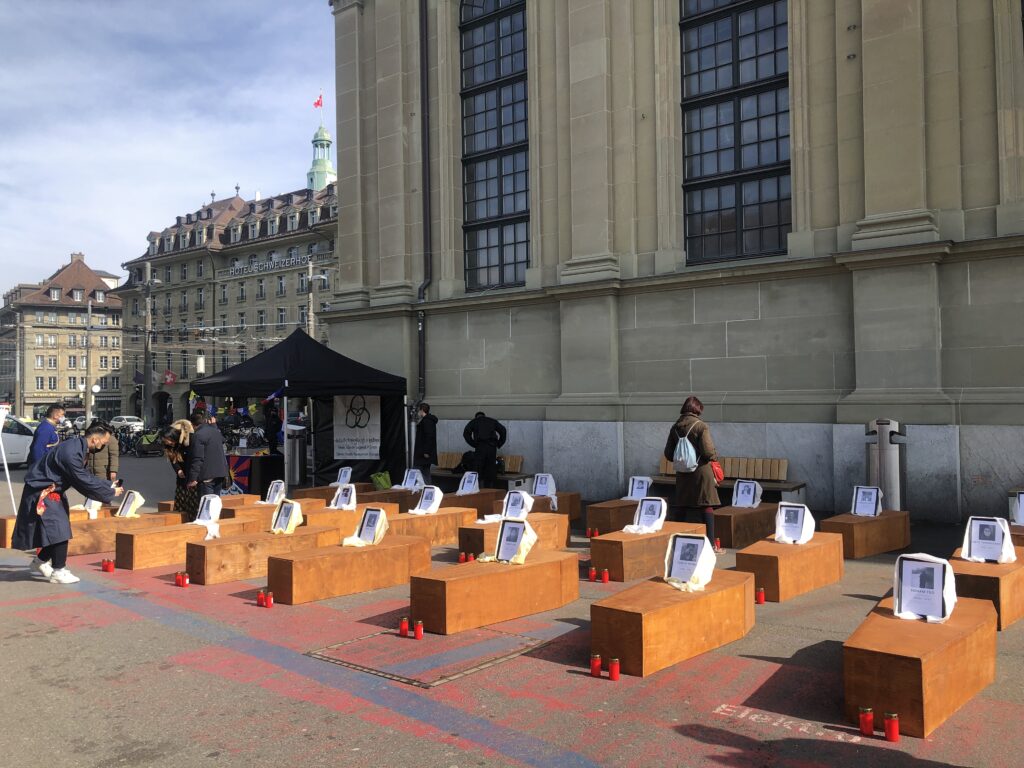 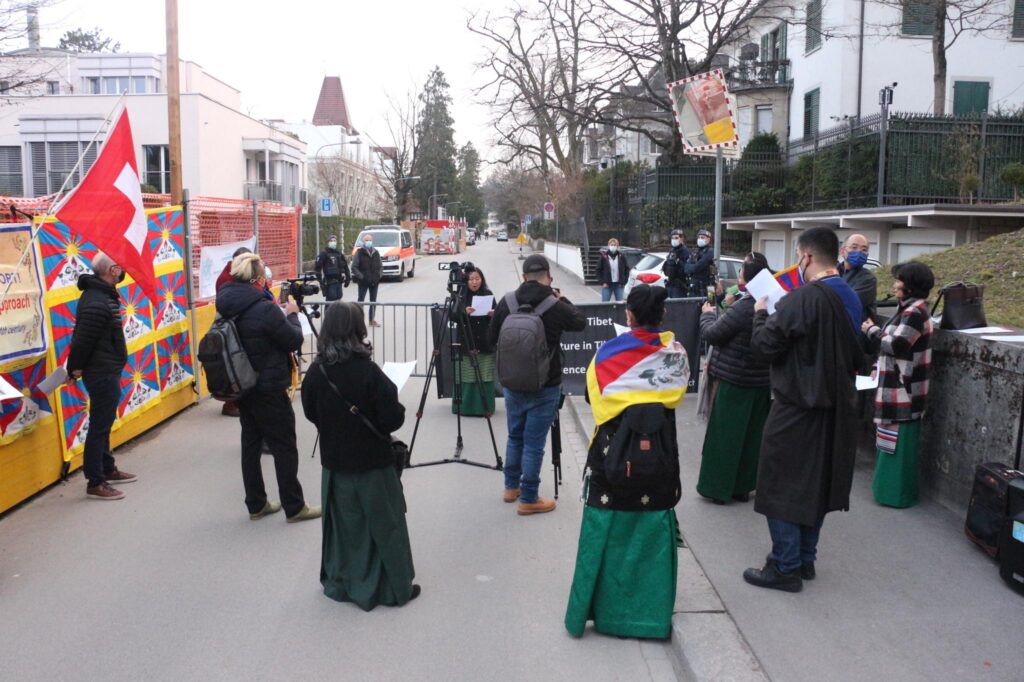 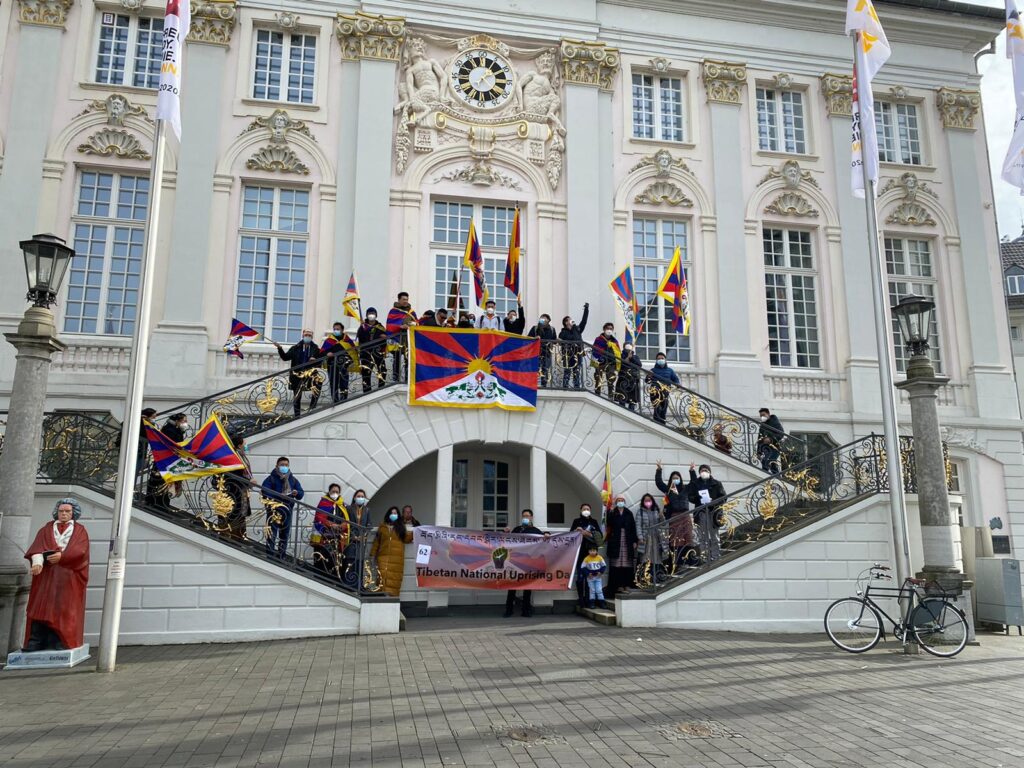 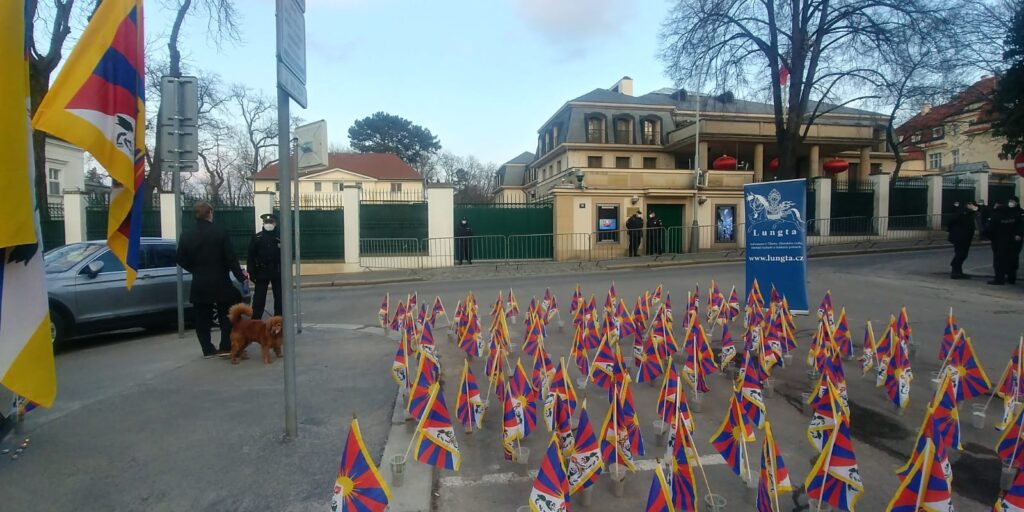 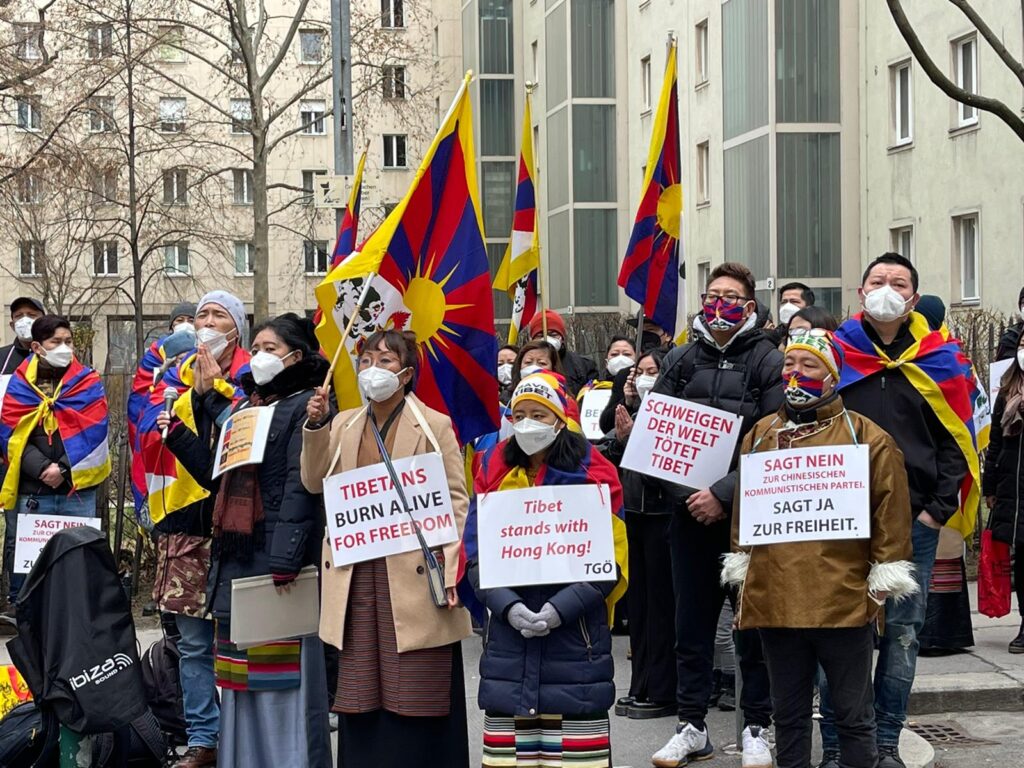 Tibetan Community in Austria organized demonstrations in Vienna and Salzburg 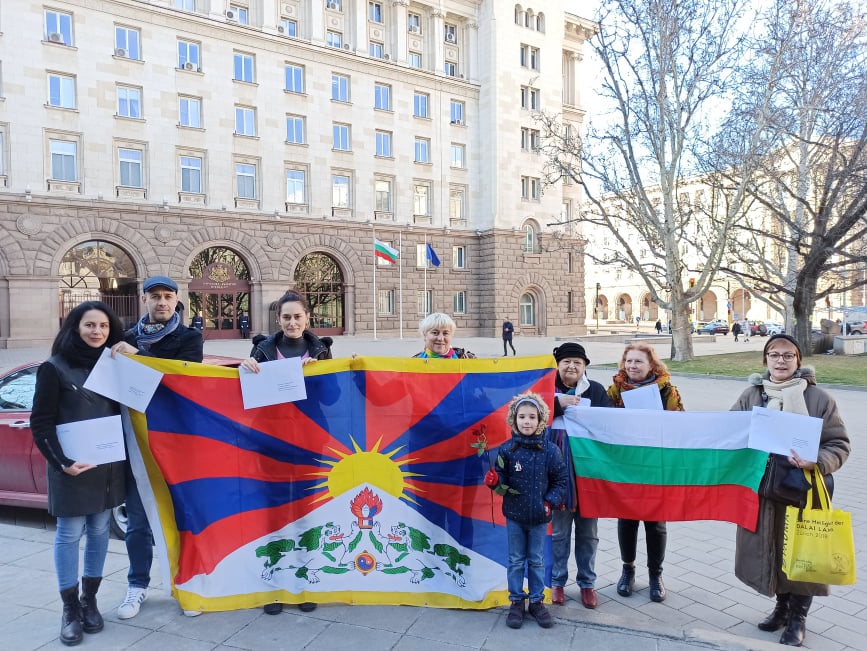 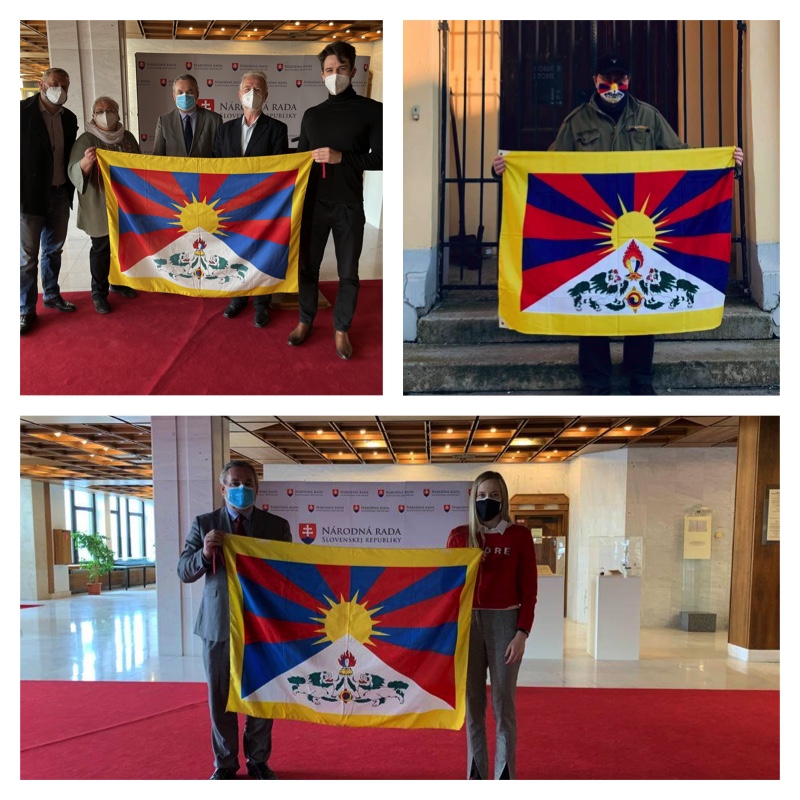 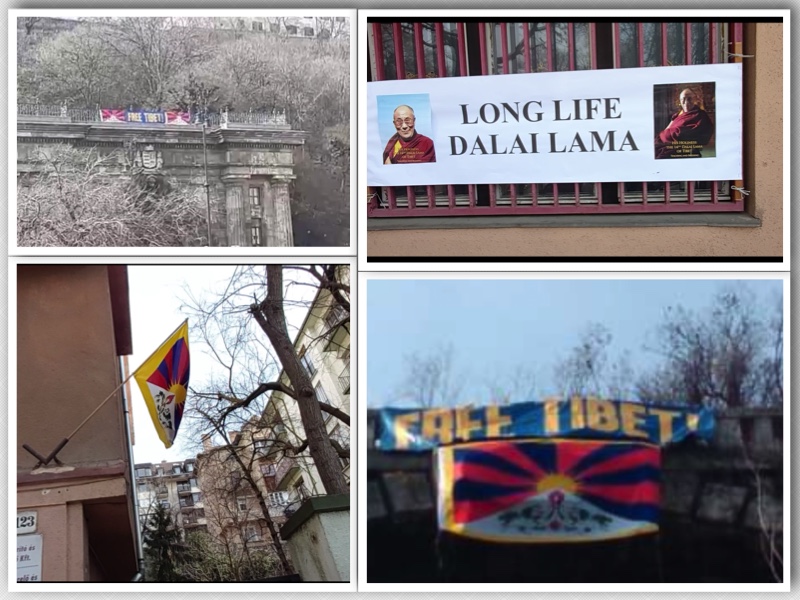 Tibetan flags were hoisted in two major bridges in Budapest