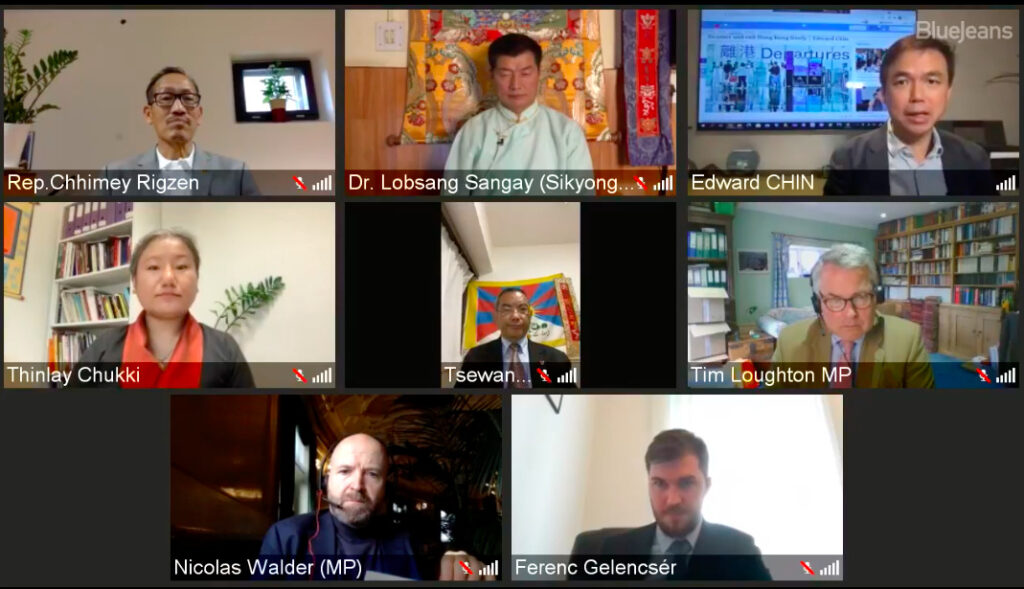 Day 1 in session of the 3-Day Virtual Event on 17-Point Agreement & 70 Years of Oppression in Tibet on “China’s Politics of Liberation and Non-Compliance: Drawing Parallels from Tibet and Hong Kong”.

Geneva: The Tibet Bureau Geneva kickstarted its 3-day Virtual Event on 17-Point Agreement & 70 Years of Oppression in Tibet with a panel discussion titled “China’s Politics of Liberation and Non-Compliance: Drawing Parallels from Tibet and Hong Kong” on Friday, 21 May 2021.

The first speaker from the expert panel Dr. Tsewang Gyalpo Arya took a detailed historical dive to explain why China forced Tibet to sign the 17-Point Agreement and breached it, impacting the validity of the Agreement as of today. In his conclusion, he proposed the potential of the Agreement to be sincerely studied for “mutually acceptable terms and performativity” to resolve the Sino-Tibetan conflict. Dr. Arya also reinforced the message that 17-Point Agreement is an important international law document to validate Tibet’s historic independent status and China’s ongoing illegal occupation.

With limited scope to interact publicly due to the enactment of the National Security Law in Hong Kong, Mr. Edwin Chin delivered his witness account. Mr. Chin revealed the rampant security attacks against Hong Kong protestors for demanding Beijing to limit the control to only diplomatic and military affairs as it promised during the signing of the Sino-British Joint Declaration on Hong Kong. He also highlighted China’s control over almost all aspects of Hong Kong since the crackdown on 30 June 2020 and the sad possibility of nearly 3 million out of the total 7.5 million nationals leaving the country creating “our own exile” with history nearly repeating itself if Beijing does not retreat.

As the first of the high-level plenary panel, President of the Central Tibetan Administration Dr. Lobsang Sangay laid out China’s seasoned politics of signing written documents like the 17-Point Agreement, 1997 Sino-British Joint Declaration on Hong Kong, and 2008 Beijing Olympics and subsequently contravening them. He reiterated his lesson to warn the international community against Chinese government’s politics of forging dialogue only where its interests are at stake and forgoing the same on issues of Tibet, East Turkestan (CHN: Xinjiang), Hong Kong, Southern Mongolia, and Taiwan.

Hon’ble Member of UK Parliament, Tim Loughton echoed President Sangay’s observation of how China has continued to sign yet breach international agreements with impunity. He called on China to take its legal commitments towards Tibet seriously first for it be seen as a trusted international player. His talk shed light on the plethora of activities taking shape in the British Parliament and the European Union as a form of “rude awakening” to China for its sanctions on the country. Congratulating the recent unanimous vote at the British Parliament to recognize the situation in Xinjiang as genocide, MP Loughton underlined the 70 years long occupation in Tibet since the 17-Point Agreement was signed as a precedent to what is now being observed in Xinjiang and Hong Kong under China.

Swiss National Council Member Nicholas Walder reaffirmed the difficulties of trusting the Chinese government given its practice of putting the party interests before the people. He similarly expressed doubts on the correctness of using the term “agreement” to describe the 17-Point Agreement given its forced nature. In his talk, Mr. Walder expanded on the increasing focus on human rights in China within Switzerland with growing focus on reassessing Chinese businesses and rule of law among the different political parties. He alerted how China is not only seeking to take seat but also change the rules surrounding human rights that attacks at the core of the international system and ultimately the values of the western world. Bringing attention to Taiwan as the next big target of China, Mr. Walder warned of what awaits the democratic countries in the west unless they “show bit more muscle” to China.

The final talk was by Mr. Ferenc Gelencsér who recently hoisted the Tibet flag from his municipality building during the Chinese Defense Minster’s visit to the city in March 2021. He reverberated Mr. Walder’s description of China as a “lone serving” and criticized the state’s imprisoning its population whose voices fall into a minority. He feared these human rights violations inside China as reminiscent of the Cold War and World War eras. Mr. Gelencsér also called out the hypocrisy of his own government for appealing to the Communist government of China over large infrastructural projects while promoting anti-communism in the country.

In the closing remarks, Thinlay Chukki noted that the 17-point agreement which was signed under duress proves Tibet’s historic independence. China’s so-called promise of liberation has brought unprecedented destruction to Tibet. And the history is repeating itself with Hong Kong.

The event was broadcasted live through the Tibet Bureau Geneva’s Facebook page.