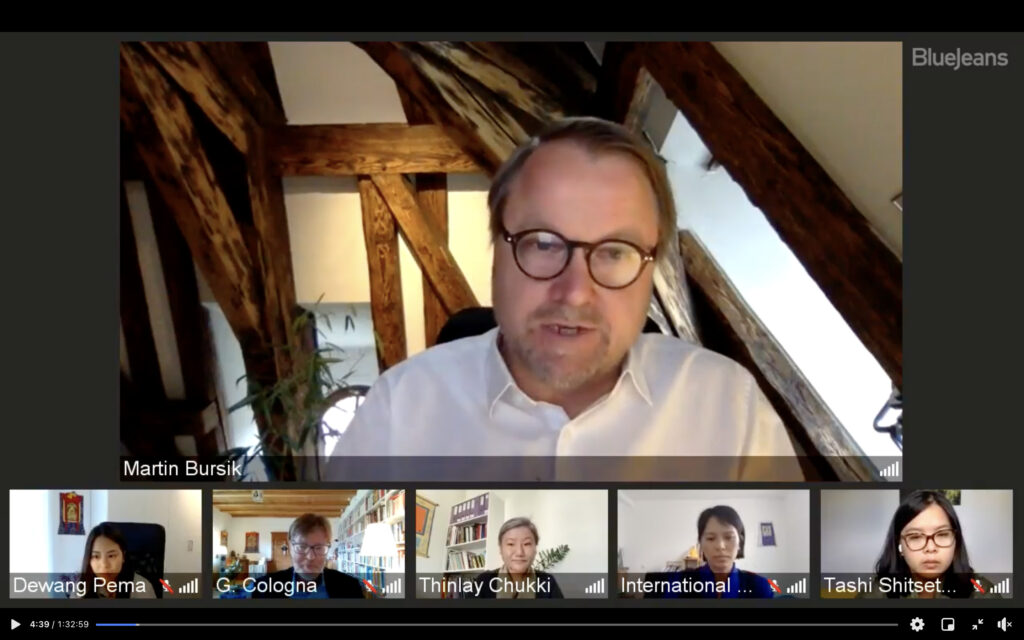 The third and final session of the virtual panel discussion highlighting the 70 years of oppression in Tibet by the Chinese Communist Party of China.

Geneva: The 3-day virtual event highlighting the 70 years of oppression in Tibet by the Chinese Communist Party of China concluded with potent discussions on 70 years of human rights violations. The discussion was held with various civil societies from Europe which are working on Tibet for a long time.

23 May 2021 marked the 70th year since the forcefully signing of the “17-point agreement” between China and the representatives of the then Tibetan Government. China in its propaganda claims that the “agreement” brought liberation to Tibet which is far from the truth. The speakers outlined the various human rights violations that are ongoing in Tibet and the advocacy work of their organizations in bringing the truth to the fore.

Hon’ble Martin Bursik discussed his travel to Tibet during the 1988 uprisings which made him aware of the brutal occupation of Tibet by China. During his discussion compared the invasion of Tibet by China which China claimed as “peaceful liberation of Tibet” to the invasion of Czechoslovakia in 1968 by 5 armies of the “Warsaw pact” which was called “brotherly help of allied armies.” He further added, “Tibet was never part of China. Tibet was an independent state. The invasion of Tibet by China is an act of aggression and Tibet is an occupied country. An occupation of a sovereign country is a violation of international law. It is important to repeat this truth continuously and not to accept the act of aggression by China.”

Dr. Gunther Cologna noted that even though the texts of the 17-agreement are reasonable but it is important to note that “China bullied the Tibetan representatives into signing the agreement under duress and accepting that they have lost their sovereignty.” China had threatened to use military pressure if Tibetans did not sign the agreement. He further noted that “these kinds of agreement can only work if there is trust, sincerity, good faith, otherwise they are not even worth the paper they are written on. And unfortunately, this is the case with 17-point agreement.” “Chinese never honored what they had imposed on Tibetans which is also very similar to what has happened with Hong Kong… It is a lesson for the West to remember while also signing the Belt and Road Initiative of China,” he added.

Tenzin Palmo from International Campaign for Tibet- Germany analyzed the deteriorating human rights situation in Tibet and the aggressive propaganda of China internationally. She noted that since the 2008 uprisings in Tibet, China has accelerated its policies of assimilation of Tibetans and in this regard has implemented forceful relocation of Tibetan nomads into concrete buildings. She further highlighted the three major priorities for ICT’s advocacy work: “Reciprocal access to Tibet; freedom of religion and the succession of His Holiness the Dalai Lama; and environmental sustainability in Tibet.”

Tashi Shitsetsang, President of the Tibetan Youth Association in Europe (TYAE), discussed the work of TYAE as a member of the Tibet Advocacy Coalition and their recent report on China’s new coercive strategies in Tibet. She further noted that the TYAE has been highlighting Tibet’s history of independence at all international platforms. Speaking on Beijing Olympics 2022, she noted that the international community should boycott this as China has time and again violated not just international laws but also basic human values which form the core of the Olympics.

Dewang Pema, Board Member of the Swiss Tibetan Friendship Society, noted that their organization has been promoting Tibetan issue with the Swiss government and the parliament since its inception. She noted that many countries including Switzerland have been mistakenly believing that economic relations with China will improve the human rights situation in Tibet, Xinjiang and other regions under China. However, contrary to this belief, China has been building surveillance network to monitor and suppress the people.

Thinlay Chukki, Special Appointee for Human Rights, in her closing remarks, noted that during the three-day virtual event on 17-point agreement and 70 years of oppression in Tibet by China, “It is very evident from the three-day discuss that the 17-point agreement was forced upon Tibet with threat of military occupation and with no intention of being legally bound by the agreement as is evident with the destruction that followed in Tibet after the signing of the agreement. It is not a “liberation” as claimed by China but rather colonization of Tibet by China.” “China’s domestic policies of suppression has international implications as evidenced by the suppression of Covid-19 whistleblowers by China and the natural disasters experienced in Tibet and bordering areas due to environmental destruction and mega dams being built by China. It is time China’s days of oppression comes to an end,” she concluded.

The panel discussion can be viewed here.