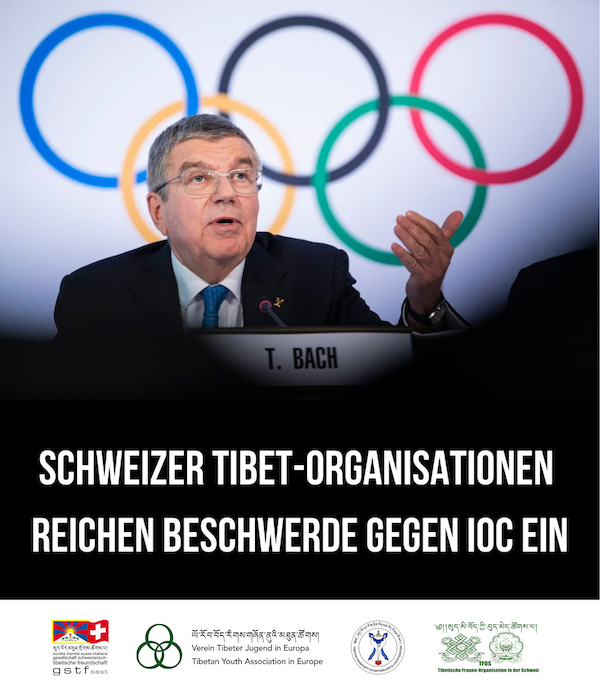 Today as the world watched the opening ceremony of the Tokyo Olympics 2021, four Tibet organisations based in Switzerland filed a complaint against International Olympic Committee (IOC) with the Swiss National Contact Point in Bern for violating the OECD Guidelines over the award of the Beijing Winter Olympics Games.

The four Swiss based Tibetan organisations are the Swiss-Tibetan Friendship Association, the Tibetan Youth Association in Europe, the Tibetan Community in Switzerland and Liechtenstein and the Tibetan Women’s Organisation-Switzerland. In their press release the complainants allege that despite its knowledge of widespread egregious human rights violations in Tibet, East Turkestan (CHN: Xinjiang), Hong Kong, Southern Mongolia (CHN: Inner Mongolia) and other territories under China, the IOC awarded the 2022 Winter Olympics to China. It further notes that 155 known cases of self-immolations by Tibetans inside Tibet were actually enough drastic signs against the repressive policies of the Chinese regime.”

The complainants further allege that several of the sponsors, partners and suppliers of the 2022 Beijing Winter Olympics are allegedly directly or indirectly linked to the forced labour/internment camps which clearly flout the OECD Guidelines for multinational enterprises.

Thomas Büchli, President of the Swiss-Tibetan Friendship Association, the lead complainant in this case, states: “The Olympic Games represent human values that should be emulated and aspired to. However, the 2022 Winter Olympics in Beijing represent the eradication of these same human values. The IOC may be excused as a mistake for awarding the 2008 Olympics to China, but awarding the 2022 Winter Olympics to China is nothing less than a co-conspiracy to commit crimes against humanity. That is why we feel it is our duty, through this complaint, to remind the IOC of its elementary responsibility to uphold these very human values that are now being flouted across the board by the award to Beijing.”

The Tibet Bureau Geneva echoes the concerns of the four Tibet organisations on the egregious human rights violations. “It is of paramount importance that the International Olympic Committee carries out human rights due diligence for the 2022 Beijing Winter Olympics to ensure that detainees of internment camps are not abused for organising Olympics. The human values which the Games represent should be implemented in practice and not just remain restricted to papers,” noted Thinlay Chukki, Special Appointee for Human Rights, based in Tibet Bureau Geneva.

Today, 23 July 2021, also marks the 100th year of the First National Congress of the Chinese Communist Party (CCP) which was held from 23- 31 July 1921. As CCP celebrated its founding centenary on 1st of this month, the Tibet Bureau Geneva released a report titled “100 Atrocities of CCP in Tibet: A Handbook on the History of CCP’s Atrocities on its 100th Year.” The report documented atrocities suffered by Tibetans since 1949 and traced the brutal treatments suffered by Tibetans which the CCP is now trying to erase.