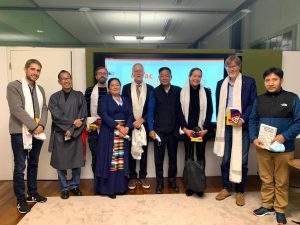 CTA’s association with Eurac Research was cemented in 1993 when His Holiness the Dalai Lama visited South Tyrol at the invitation of then-President Luis Durnwalder.

The visit of Sikyong to Eurac Research centre this time was to illuminate them on his administration’s policy and to seek their coordination to bring awareness on issues related to Tibet. Sikyong explained that his core political strategy in dealing with the Chinese government will continue to be the one espoused by His Holiness the Dalai Lama which is the Middle Way Approach.

“We will continue to follow the Middle Way Approach because that is the policy first proposed by His Holiness the Dalai Lama and widely supported by the Tibetans, and to this day, the significance of the proposal remains unchanged after the Tibetan Parliament adopted the policy with unanimous acceptance,” Sikyong said, further noting that if the policy needs change in any form or shape then it will go through a referendum.

During the meeting, Sikyong also presented a brief overview of what has been done by his administration in the last five months. He explained the major reorientation and restructuring of the Departments of CTA under his leadership, particularly the revamp of the Taskforce on Sino-Tibetan Dialogue which he noted was his first commitment after taking the charge of Sikyong. He continued that the earlier task force committee was replaced by a four-member core committee consisting of a member each from the Department of Security, Department of Information and International Relations, Tibet Policy Institute, and the Kashag Secretariat. Through this approach, Sikyong noted that he hopes to resume dialogue with the Chinese counterpart which has remained stalled since 2010.

Likewise, Sikyong briefly explained the key responsibilities of the departments involved in the committee. The Department of Security, in addition to its primary responsibility of ensuring the security of His Holiness the Dalai Lama, has now been entrusted with the additional responsibility of gathering information from inside Tibet. Since Tibetans in exile mostly rely on the information given by newly arrived Tibetans from Tibet, this too has proven difficult as their numbers have reduced dramatically because of growing restrictions after the 2008 protest. Also, the ensuing border conflict between India and China in recent years has also led the Indian government to ban major communication apps like WeChat which was a primary mode of communication between the exiled Tibetans and the Tibetans inside Tibet.

“So it’s not just restrictions on physical mobility of people but on the information flow too,”  Sikyong added while assuring his administration’s effort to keep trying to gather as much information as they could on the situation inside Tibet despite the challenges.

Sikyong next explained the key responsibilities of the Department of Information and International Relations, and the Tibet Policy Institute (TPI), the official research centre. Sikyong mentioned that efforts are underway to seek collaboration with governments and organisations to research the ground reality inside Tibet vis-a-vis tackling the disinformation campaign spearheaded by Chinese media. He also sought the cooperation of Eurac in aiding TPI to conduct more qualitative and analytical researches on Tibet based on the information gathered by the Security Department.

In addition, Sikyong said that the changing social and demographic character of the Tibetan community with at least 45% of the Tibetan population residing abroad was an advantageous factor in representing the Tibet issue worldwide since a large number of those Tibetans have well-integrated themselves into the culture and systems of their host nations.

After his meeting engagements in Bolzano, Sikyong is scheduled to depart for Rome to attend the conference of the Inter-Parliamentary Alliance on China (IPAC) on 29 October.