The Issue of Tibet’s Environment and Human Rights is about Morality, not Politics: Sikyong in Bern 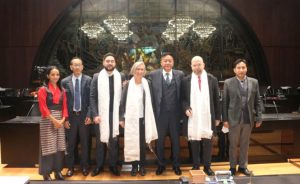 Sikyong Penpa Tsering of the Central Tibetan Administration arrived in Bern from Geneva on 4 November. Upon arrival, Sikyong went to the Switzerland National Council (Swiss Parliament) where he met Nicolas Walder, member of the Swiss National Council, and President of the Swiss Parliamentary support group for Tibet, and national council members Ms Prisca Birrer-Heimo, and Cedric Wermuth.

During the meeting, Sikyong apprised the Swiss National Council members about the brutal policies being practiced by China inside Tibet and its destructive impacts on Tibetan religion, culture, language, and identity. Urging the Swiss parliamentarians to raise the issue of Tibet, Sikyong stated that Tibet has never been a part of China historically and the issue of Tibet’s environment and human rights is a matter of morality, not politics. Sikyong further discussed future plans and activities to amplify the Tibetan movement and the just cause of the Tibetan people.

In the afternoon, Sikyong participated in a discussion on the topic ‘Tibet was never a part of China, One China policy should be abandoned’ organised by Tibetan associations based in Switzerland. Sikyong was joined at the discussion by Dr Micheal van Walt van Praag, Regula Rytz, member of Swiss Parliamentary group for Tibet, Rolf Bächli, Author, and Vijay Kranti, Indian Journalist. The discussion was moderated by Cludia Sedioli Maritz.

While in Bern, Sikyong also met several other dignitaries in the city. He will leave for Zurich on 5 November.