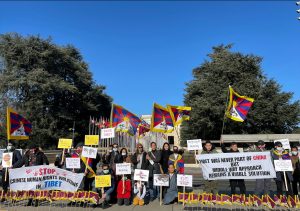 Marking the historic day of the proclamation of Tibetan independence by the 13th Dalai Lama, the Swiss-Tibetan Community of Geneva section staged a sit-in protest in front of the UN Human Rights Council Office in Geneva, on 13 February.

Unfurling the Tibetan national flag and enlarged banners depicting the grim situation in Tibet, members of the community gathered to highlight the historical independent facts of Tibet and protested China’s continued illegal occupation of Tibet. Furthermore, under a banner titled “Tibet Was Never A Part of China But Middle Way Remains a Viable Solution”, members of the community called for the international community’s concerted efforts to counter Beijing’s propaganda with informed historical facts of Tibet and current situation of Tibetan people under China’s control.

According to the community’s press release, “The community observed 13 February by revisiting the historical facts of Tibet to resist Beijing propaganda machinery whitewashing its crime and violations of international order.” Regardless of how much China attempts to whitewash its atrocities in Tibet, Tibetans and supporters will continue to reveal the truth of Tibet, added in the press release. 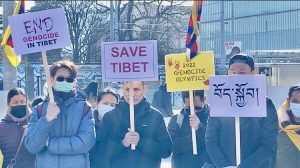