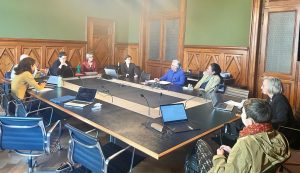 The Swiss-Parliamentary Group for Tibet met to discuss and chalked out action plans for Tibet on 07 March, on the side of the ongoing spring session of the parliament.

During the meeting the members of the parliamentarian were briefed on the current human rights situation in Tibet, in particular, the rapidly deteriorating situation in Kham Drakgo and the ever-growing Chinese government’s crackdown on cultural and religious expression of Tibetan people.

Furthermore, a wide range of issue was raised, inter alia, situation of undocumented Tibetan asylum seekers, commemoration of 63rd Tibetan national uprising day and future action plans in defending the cause of Tibetan people in Switzerland by the legislators.

The spring session of the Swiss parliament commenced from 28 February and is scheduled to hold until 18 March.