Geneva Summit Highlights Oppression by China in Tibet and Other Regions 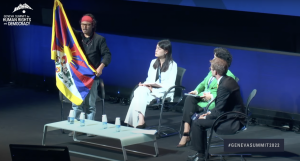 Political dissidents, representatives of current political prisoners and freedom activists gathered in Geneva, a global hub for diplomacy and human rights, for the 14th edition of the Geneva Summit for Human Rights and Democracy, on 06 April 2022. The summit shone the global spotlight on countries with deplorable human rights records in order to put them on the international agenda to do more in defence of freedom and human rights. The rights record of China and regions under its oppression are deliberated, among other authoritarian regimes, at the summit.

A dedicated summit segment on China titled “The Struggle for Human Rights in China” featured Tibetan poet and freedom activist Tenzin Tsundue; Founder of Campaign for Uyghurs, sister of a political prisoner in China Rushan Abbas and Policy Advisor at Hong Kong Watch, Advisor to Inter-Parliamentary Alliance on China Joey Siu. The panel was moderated by the Founder and CEO of Arise, an anti-slavery charity, Luke de Pulford.

Speaking at the summit this morning, Tenzin Tsundue moved the audience by sharing his journey and jail experience in Tibet- blindfolded, beaten, tortured, denied food and sleep in order to “break the person”; highlighted how the Tibetan Buddhist and cultural upbringing had given him inner strength and said “the real force is not the one who is torturing from outside”, instead of empowering oneself for the higher purpose of life is the “real force”, said Tsundue at the summit. Empowerment does not come from “hatred, anger and desire for revenge”, in fact, sympathise with the enemy who is undergoing a period of weakness, Tsundue appealed. “There is another way, it does not have to be like this- hating each other”, added Tsundue.

Highlighting the historical facts of Tibet, Tsundue said, just after the second world war; the beginning of the United Nations and the period of history when most of the nations were beginning to become free and independent, that was the time China invaded Tibet, killing thousands of Tibetan people. But internationally, most people were not aware, and those who knew Tibet sided with China. Today, 9.6 million square kilometres of land is made by putting together Tibet, East Turkestan, Manchuria and Southern Mongolia. Sixty per cent of today’s China landmass is occupied countries, explained Tsundue.

Expressing his concern over Chinese people who are persecuted and suppressed by their own government, Tsundue said “I am not worried about the Tibetan people, I am worried over Chinese who are under their own dictatorial government, who are suffering”. Despite China being the biggest authoritarian regime in the world with 1.4 billion population, Tsundue expressed his dismay over governments internationally supporting China and placing business interests above everything. There has to be another way, it cannot go on like this- dictators supporting dictators and speaking peace at the United Nations but internally working only to suppress more human beings”, lamented Tsundue. Solidarity amongst human rights defenders, and freedom activists is the way forward, Tsundue told the audience.

Swiss-Tibetan Women Organisation, one of the partner NGOs of the Geneva Summit, facilitated Tibetan activist Tenzin Tsundue to speak at the Summit. Tsundue is scheduled to undertake Tibet advocacy tours in other parts of Europe. 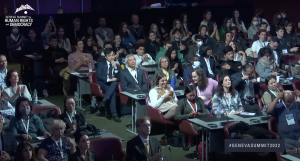 Where is the 11th Panchen Lama?- Spanish