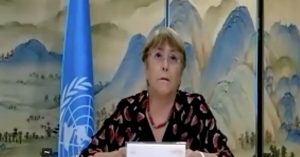 With regard to situation of Tibetan people under Chinese oppression, the High Commissioner said in the end of the mission’s statement that “it is important the linguistic, religious and cultural identity of Tibetans be protected, and that Tibetan people are allowed to participate fully and freely in making decisions about their religious life and for dialogue to take place”. She said she has discussed “education polices”, and underlined the importance of (Tibetan) “children learning in their own language and culture in the setting of their families or communities”.

The mission’s statement failed to reveal any specific cases of persecution of Tibetans, Uyghurs, Southern Mongolian, Hong Kongers and others under the Chinese repression. The rights groups expressed serious concerns over the debacle missions’ statement ignoring “overwhelming evidence” of systematic rights violations by China.