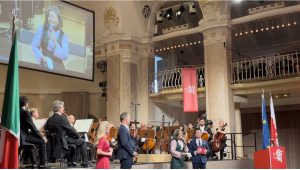 The celebration presided over by governor of South Tyrol Arno Kompatscher was partaken by Governor of Tyrol Gènther Platter; Austrian Federal Minister for the EU Karoline Edtstadler; Italian Minister of Economy and Finance Daniele Franco; President of the Autonomous Province of Trento Maurizio Fugatti and Minister-President of the German Speaking community of Belgium Oliver Paasch amongst other dignitaries.

While addressing the gathering, Representative Thinlay Chukki extended greetings from His Holiness the Dalai Lama and Central Tibetan Administration to the people and the autonomous government of South Tyrol. Highlighting His Holiness the Dalai Lama’s first visit in South Tyrol 25 years ago, Representative Thinlay Chukki congratulated South Tyrol for successfully overcoming the troubled times and bringing peace. She said South Tyrol is a benchmark for genuine autonomy, and the Tibetan people continue to keep hope and aspiration to enjoy genuine autonomy in Tibet.

The genuine autonomy guaranteed for people of South Tyrol has brought an end to the violence, she added. Referring to the current challenges and sufferings due to Ukraine war, Representative Thinlay said that South Tyrol and its autonomy in particular has become a lesson to the entire world that “where there is a will, where there are people who are willing to come together and work through the problem, there will always be possibility for peace, love and compassion. Every human being should be treated with dignity”, she concluded. The video footage of the official ceremony with the Representative’s speech is available on the Tibet Bureau Geneva Facebook page.

While in South Tyrol, Representative Thinlay also met with board members of Italy-Tibet Association and thanked them for their unwavering support and being with just cause of Tibet for all these long years.