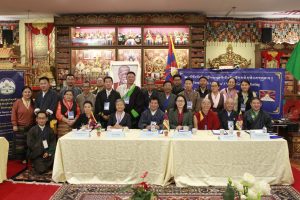 Europe Tibetan Associations held their third general meeting in Milan, Italy from 01 October to 02 October. The meeting was facilitated by the Tibet Bureau in Geneva in close coordination with the Europe members of Tibetan Parliament in Exile, Offices of Tibet in London, Brussels, Paris’ coordinator office and Tibetan Community in Italy. It was held at Ghe Pel ling Tibetan Buddhist Center based in Milan, Italy.

The special guest DIIR Kalon Norzin Dolma presided over the inauguration of the meeting. In her address, Kalon Norzin Dolma said the support and solidarity for Tibet from the western governments and people are all because of His Holiness Dalai Lama’s wisdom and leadership. Because of which, the agenda of Tibet is alive, added Kalon.

Emphasising the importance of preservation of Tibetan culture and language, Kalon Norzin said it is crucial to facilitate and nurture Tibetan youth (future seeds of Tibet) in such a way that would build the capacity and bring every single Tibetan closer to the Tibetan freedom movement with firm understanding of Tibetan culture, language and situation in Tibet. Referring to the Tibet advocacy at the Europe Union level and in respective national level, Kalon Norzin said “collective and coordinated” efforts are key in advancing the Tibet advocacy. She further stressed the critical role of Tibetan communities, associations and individual Tibetans to take cordial relations with the government and people of the host country.

Representative Thinlay Chukki welcomed the meeting attendees and briefly walked through the meeting agenda including the significance of holding the meeting in Italy.

Commending the democratic values and virtues embraced by the Exile Tibetan community, a group of friends of Tibet observed the proceedings of the meeting. The observers and guests of the meeting include executive members of Italy-Tibet Association Claudio Cardelli; Nanni Ribaldone; President of AREF International Marilla Bellaterra; President of ADHI Nicola Missiani; President of Union Buddhist Associations in Italy Filippo Sciana; Michela; Carmen Leccardi; Giancarlo Giorgetti Morandi and Manuela Morandi.