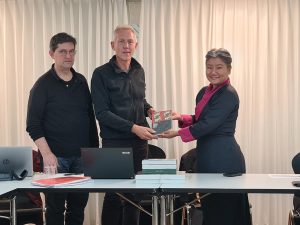 The book titled “Fokus Tibet” in German language authored by Uwe Meya, board member of Swiss Tibetan Friendship Association, was released on 05 November 2022 in Switzerland by the Representative of His Holiness the Dalai Lama and the Central Tibetan Administration Ms. Thinlay Chukki. The book compiles decades of news summaries drafted by the author from 2002 to 2021 as part of outreach and awareness campaigns on the situation inside Tibet. It documents the systematic suppression and sequences of repression in Tibet under the occupation of China.

Representative Thinlay Chukki presided over the book launch event along with the President, Vice-President, board members and section leaders of the Swiss-Tibetan Friendship Association.

The author of the book Uwe Meya is a long time Tibet supporter and has visited Tibet and witnessed prisoners in Lhasa in 1988. After having seen the ground situation in Tibet in 1980’s, the author became a founding member of the Tibet-Initiative Deutschland e.V. (TID)in 1989. Since then, the author has been actively involved in Tibet advocacy including raising awareness on Tibet in the German speaking countries. During the book launch author Uwe Meya noted that he started the compilation in 2002 when he was the President of the Tibet-Initiative Deutschland e.V. (TID) and he had to send telefax to the Tibet supporters appraising them about the situation in Tibet.

Addressing the gathering, Representative Thinlay thanked Uwe Meya for his dedicated work and support for Tibet. She further noted that Swiss-Tibetan Friendship Association is one of the most important Tibet Support Groups which has been actively garnering support for Tibet both at political as well as community level. She thanked the section leaders for their active role and commended the executive committee including the President for their leadership. 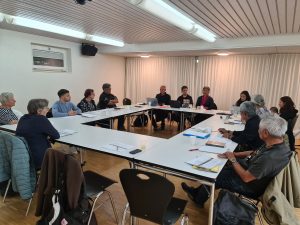