President Dr Lobsang Sangay with Erica Georgina Terpstra, a retired Dutch politician and one of the strongest voice for Tibet.

Amsterdam: In his last leg of 12 cities tour, CTA President Dr. Lobsang Sangay was warmly received by Representative Tashi Phuntsok and his staff of the Office of Tibet, Brussels; Tsering Jampa, Director of ICT, Europe; and the Tibetan community of Netherlands when he arrived at Schipol airport, Amsterdam early in the morning.

He hardly got an hour’s rest at the hotel and left for Rode Hoed conference hall where more than 400 Tibetans were eagerly gathered to listen to him.

In his keynote address at the meeting, President Sangay advised the Tibetans not to waste time in discussing small internal politics; rather they should focus more on issues related to China and inside Tibet.  He spoke in-length about how successfully he had concluded the 11 cities visit starting from Madrid amidst China’s pressure on the host countries. He also said, “The younger generation of Tibetans must study hard and get a decent job in the Netherlands. It would be good for the Tibet cause if Tibetans work in the government bodies or in the parliament. However, it is up to you to pursue a career of your interest.”

He emphasized the importance of the green book and urged the Tibetans to participate in the forth-coming Tibetan demographic survey.

The meeting with Tibetan community concluded after the presentation of certificates to the Tibetan Community members and the teachers of the weekend Tibetan school.

Later in the afternoon, President Sangay attended the ‘Thank you the Netherlands’ event jointly organized by ICT, Europe and the Tibetan Community, the Netherlands. 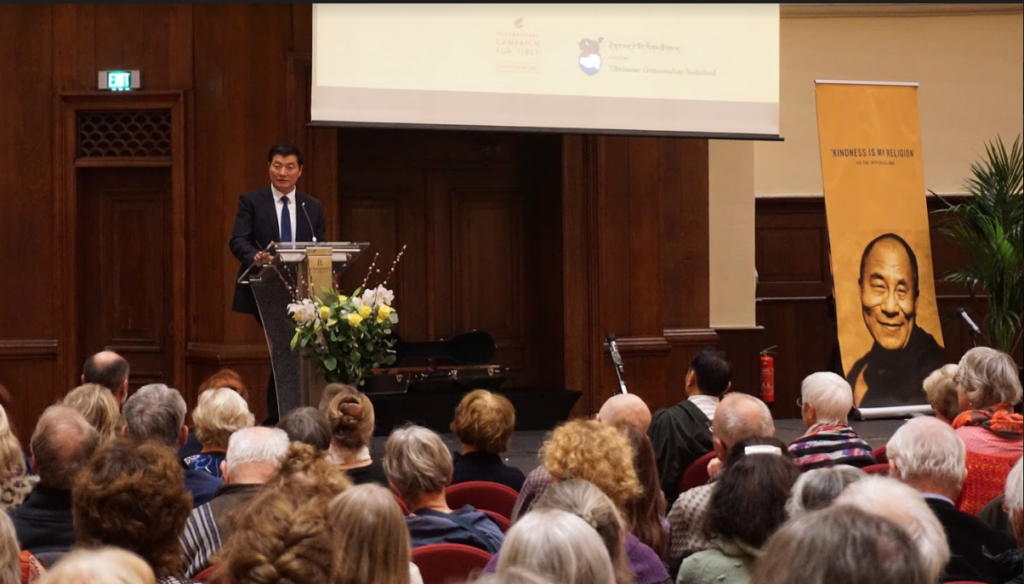 Tsering Jampa, director of ICT, welcomed and gave a brief account of the event. She thanked all the Dutch people for their help and support for Tibet over the last 60 years. She also offered a tribute to Gyari Rinpoche who passed away three weeks ago.

The program unfolded with a 5 minutes video on Dutch support for Tibet which was followed by a 2 minute Thank you Netherlands song sung by Tibetan children. Then a few Tibetan women performed a Tibetan folk dance of the Kham region of Tibet, the lyrics of which was composed by Tibetans in Tibet in praise of President Sangay for his excellent leadership.

Highlighting the tragic events in Tibet after its occupation by China, President Sangay expressed his gratitude for His Holiness the Dalai Lama for his courageous and wise leadership of the Tibetan people in a dire time of distress. President Sangay added, “From having lost everything to building a community, reviving our culture and religion in exile, Tibetans have survived for the past 60 years.” “Hence,” he said, “we are especially privileged and honoured to dedicate this year to all our supporters and friends from around the globe who contributed to the Tibet cause. Because of their support and care for our education, health, etc., we were able to stand firm and survive in our host countries. Therefore, I am travelling around the globe to thank people and governments. After a few in India, I am going to travel to Australia.” 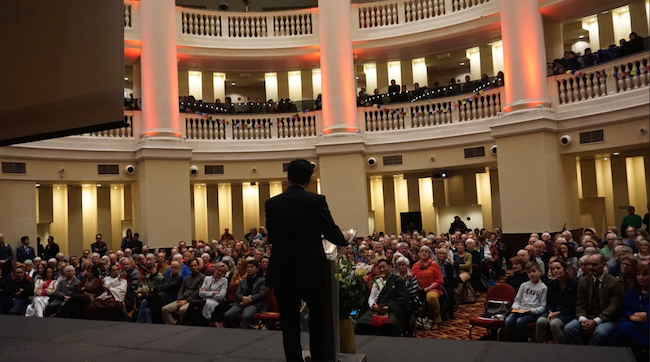 Friends and supporters of Tibet in attendance at the Thank you Netherlands event.

On reviving, restoring and the thriving of Tibetan Buddhism not only in the personal and social space of Tibetans but also across the globe, President Sangay said, “Even after the complete destruction of Buddhism in Tibet, the Chinese leaders must be in wonderment of this development. Under the leadership of His Holiness the Dalai Lama, Buddhism not only revived in Tibetan’s personal and social space but is widely followed in China too. It is because Buddhism is the foundation of our civilization and also the base of our freedom struggle. Communism with its 100 years is no match for Buddhism that is 2500 years old. Now we have one more task to do and that is the restoration of basic freedom in Tibet.”

President Sangay then touched on the 153 Tibetan self-immolation inside Tibet. “The self-immolators only aspires to see the return of His Holiness the Dalai Lama to Tibet and basic freedom for Tibetans.” He then clarified that the Tibetan administration has consistently and categorically discouraged self-immolations in Tibet.

Speaking about Chinese pressure to countries he visited, he recalled an incidence in South Africa where he was to give a talk at a law school.  The brave Dean of the Law School and the faculty members ended up supporting him even under tremendous pressure from the government, donors, and the Chancellor. Standing by their decision, they asked how they can deny someone the right to speak when they themselves teach freedom of speech in their classroom. At the talk, hundreds of South African and Chinese came and stormed the classroom. They took over the auditorium and the stage. Fortunately, the organisers had arranged an alternate hall where President Sangay was able to speak to two-thirds of the student body who showed up to listen to him.

He said, “This incident happened in the land of Desmond Tutu and Nelson Mandala. This is where democracy was fought for and the apartheid eliminated through years of perseverance and hardship.  And today the Chinese government is ordering them on who they should let speak in their own country. After the talk, there was over 30 Chinese with banners and still shouting. As I saw many phones pointing at me, wanting to see a Tibetan guy coming and speaking, perhaps running away. I gave the victory sign with a smile. Next day the Chinese embassy issued a press release against me but there were no photographs of me with the victory sign.” 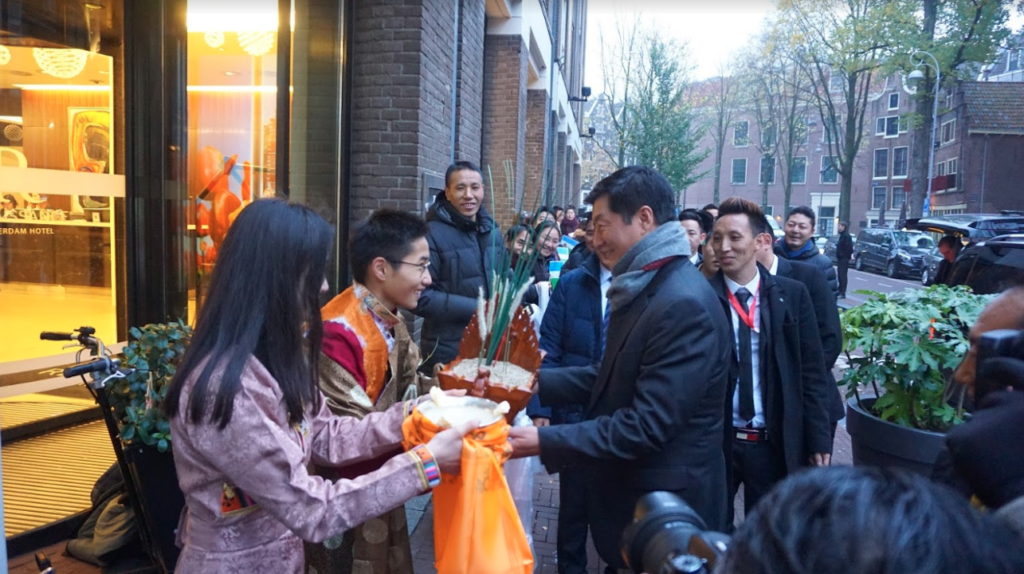 President Sangay accorded a traditional Tibetan welcome by Tibetan community in the Netherlands.

President Sangay said the struggle for the restoration of Tibetan freedom has been a long and an arduous struggle, but one that is not impossible. He cited the example of the fall of Berlin wall, the release of Nelson Mandela and Ang Sang Sui Kyi, the end of the war in East Timor, and Northern Ireland.

“Who would have thought the problem of Northern Ireland will be resolved but it did. All of the leaders got the Nobel Peace Prize and returned to their country. Now, it is the turn of our own Nobel laureate His Holiness the Dalai Lama to return to his home in Tibet. We must all work, together, a little longer, and make this dream come true; the return of His Holiness the Dalai Lama to the same place from where he left in the mid-night of March 17 1959. That would be such a beautiful story to tell, a story of His Holiness the Dalai Lama, after 60 years to finally be back in the Norbulingka, his residence.  The six million Tibetans would be thanking the world for supporting us for 60 years and it will be a success of justice, non-violence, freedom and democracy.

President Sangay highlighted some positive developments. He said, “the Australian government has had enough with China. The Czech Parliament recently formed the largest Tibet support group in Europe. Japan has 92 member Tibet support group, the largest in the world. The US, amid on-going trade tariff issues, the Secretary of State, Mike Pence spoke on Tibet and the human rights situation in China during his tour of Asia.”

President Sangay ended, “If you are for democracy, for freedom and for peace, then you are automatically for Tibet, for human rights. You have to support Tibet and the Central Tibetan Administration which practices a democracy without borders, party less and a role model for other such bodies and communities.”

At the event, Erica Georgina Terpstra, a retired Dutch politician was presented with the “Thank You’ award by President Sangay. For more than 40 years, Erica had stood strong in solidarity with the Tibetan people and supported the cause of Tibet.  She accepted the award on behalf of all the Dutch people who support the cause of Tibet.

The event concluded with a Thank you speech by Karma Ngawang, the Vice President of the Tibetan Community.

-Filed by Office of Tibet, Brussels 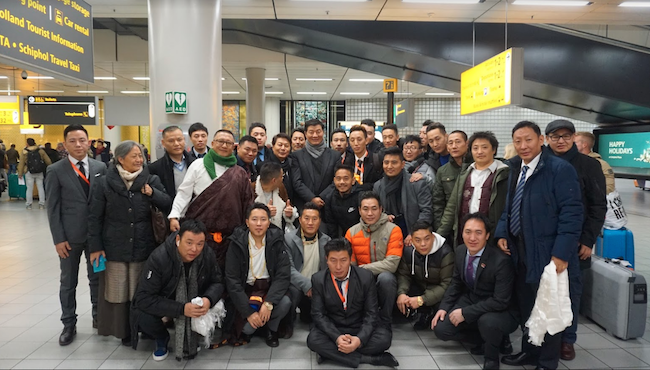 President Sangay is warmly received by Representative Tashi Phuntsok and staff of the Office of Tibet, Brussels, Tsering Jampa, Director of ICT, Europe and the Tibetan community of Netherlands at Schipol airport, Amsterdam. 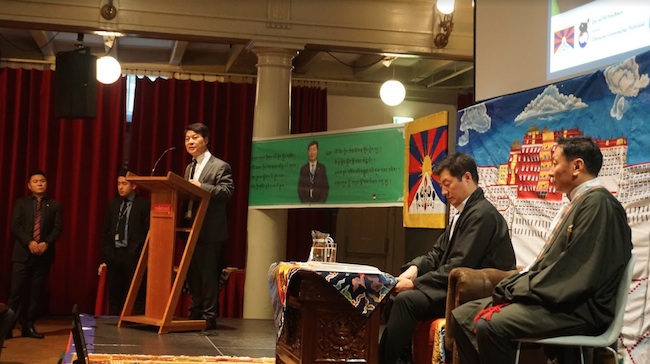 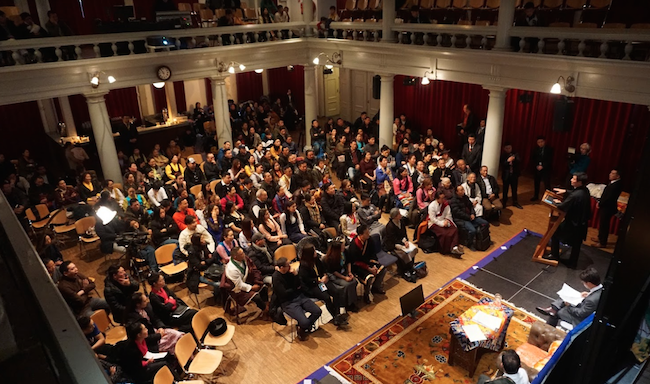 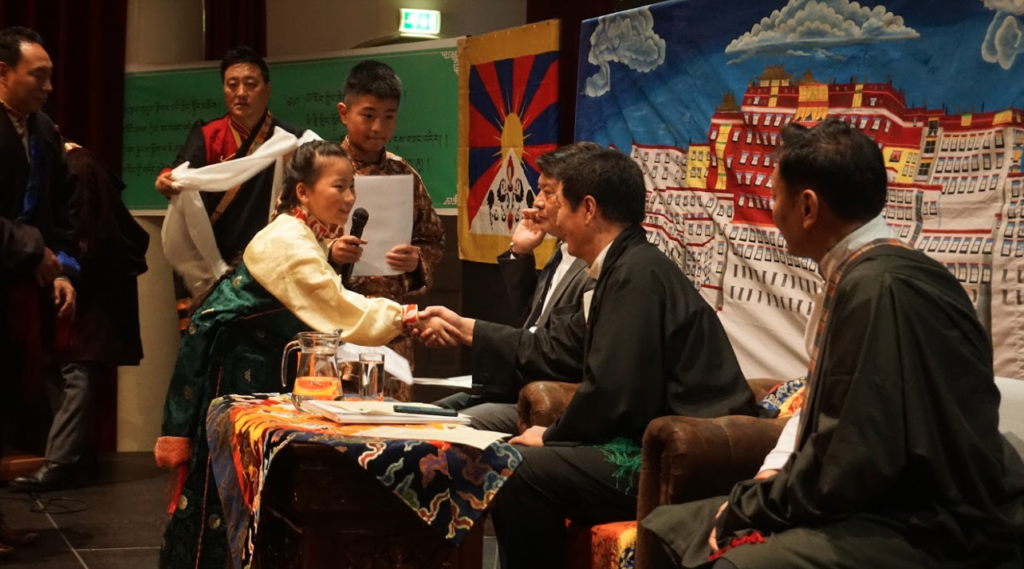 President congratulates a group of young Tibetans after their presentation.