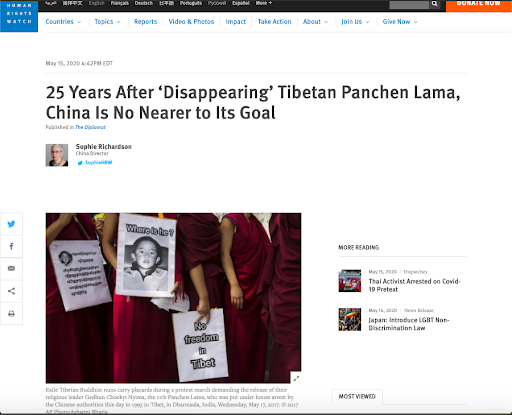 The China Director of Human Rights Watch, Sophie Richardson called for the freedom of Pachen Lama and said, “The Chinese government needs to show genuine respect for the Tibetan religion, its believers and its current leaders, starting with the current Dalai Lama. Without that, the evidence so far is that Chinese authorities’ enforced parading of innocent abductees as its proxies in Tibet will not gain support from the Tibetan public or others concerned about religious freedom.” The article can be read here. 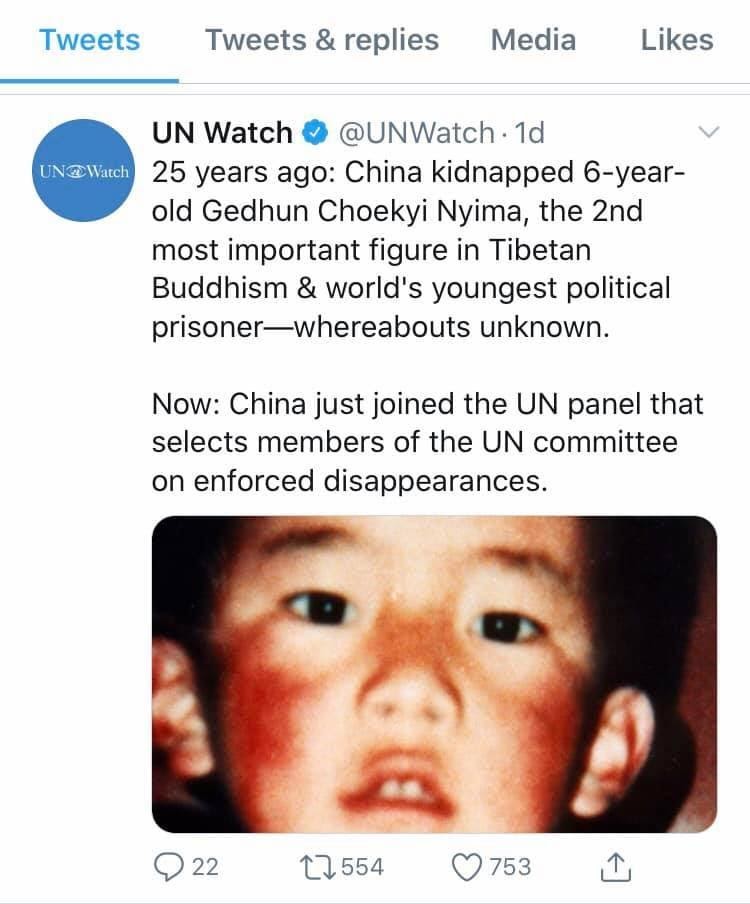 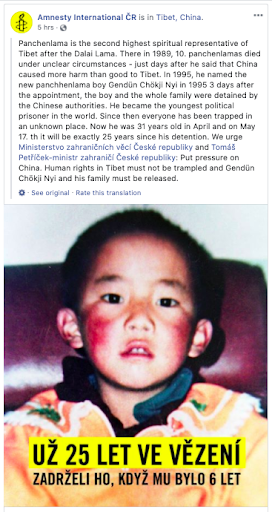 Amnesty International Czech Republic joined the global campaign by posting support on their Facebook page urging The Czech Republic Foreign Affairs Minister Tomáš Petříček – “to put pressure on China. Human rights in Tibet must not be trampled and Gedhun Choekyi Nyima and his family must be released.” The Facebook post is receiving much support. 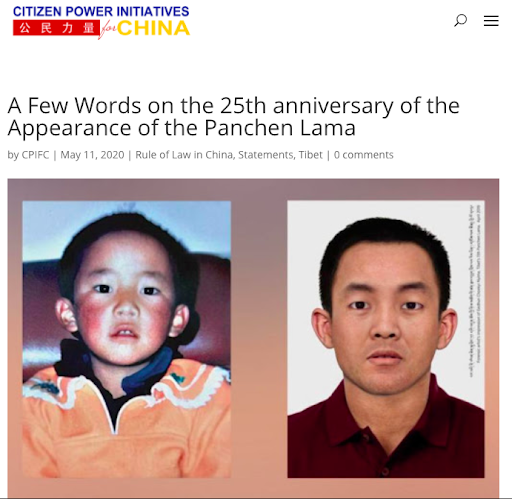 Society for Threatened People  has also joined the global campaign and has asked Chinese government to “finally announce what happened to the 11th Panchen Lama.” On May 17, 1995, Gedhun Choekyi Nyima was kidnapped at the age of six. “Instead of the rightful Panchen Lama, the Chinese government has appointed a five-year-old Tibetan named Gyaltsen Norbu as the 11th Panchen Lama. He serves the government in Beijing as a puppet for the alleged proof that there is freedom of belief in China, ”explains Hanno Schedler, GfbV consultant for genocide prevention and responsibility for protection. The statement can be read here.

Citizens Power Initiatives for China which is an organization founded by survivor of Tiananmen Square Massacre Mr. Yang Jianli, also joined the global campaign for the release of Panchen Lama. It issued a statement calling for the immediate release of the Panchen Lama and said, “We condemn China’s continued colonizing policy in Tibet and call on the world democracies to confront China on the issue of Tibet. On the religious level, the world democracies do not have, and neither do Chinese who are not Tibetan Buddhists, the right to interfere with the decisions regarding the succession of the Panchen Lama or that of the Dalai Lama, which absolutely rests with the Dalai Lama, Tibetan Buddhist leaders and the people of Tibet. But on the human rights level, we all have the duty to defend a religious group and people from unspeakable bullying by a governmental despot.”

The statement can be read here. 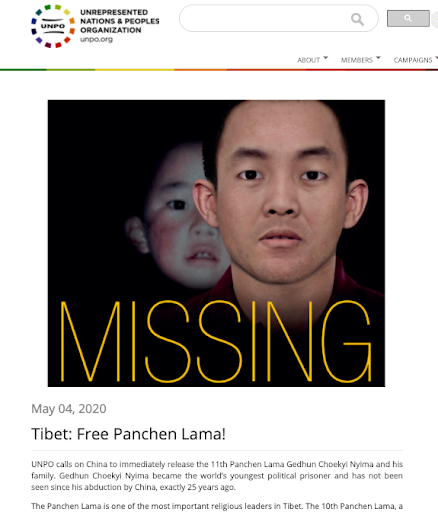 UNPO: The Unrepresented People’s Organization also published an article on their website calling for the release of Panchen Lama. Joining the global campaign for the immediate release of Panchen Lama, UNPO said “This case is one of the most symbolic examples of China’s assault on human rights and freedom of religion, “and called on the “international community to hold China accountable for its crimes under international law.” The statement can be read here. 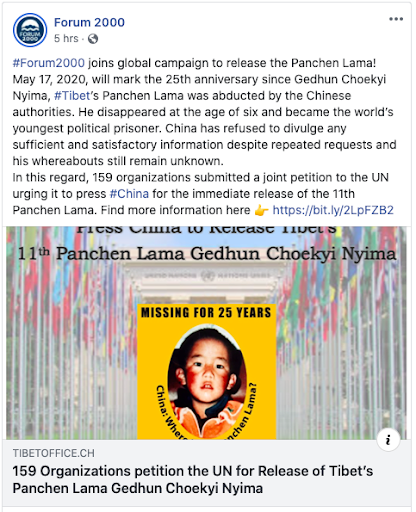 Forum 2000: Forum 2000 also joined the global campaign for the release of Panchen Lama with their Facebook post.

Noting the support received from the civil society organizations across the globe, Tibet Bureau Geneva Representative Chhimey Rigzen said, “On behalf of Tibet Bureau Geneva we would like to thank all the civil society organizations who have stood for the human rights including that of Tibetans and joined this global campaign for release of Panchen Lama on this 25th year of enforced disappearance. Civil society organizations play a critical role in highlighting major issues in the society as well as influence the society by raising their conscience for corrective actions. The case of Panchen Lama shows the egregious human rights violations being carried out in Tibet for the last six decades and we hope that the call of civil societies will further press China and be held accountable for its deeds.”

Moreover, 159 organizations from 19 countries submitted a joint petition to the UN calling for its intervention and to press China to release Panchen Lama Gedhun Choekyi Nyima.